VA says it made a 'mistake' using gender-neutral motto 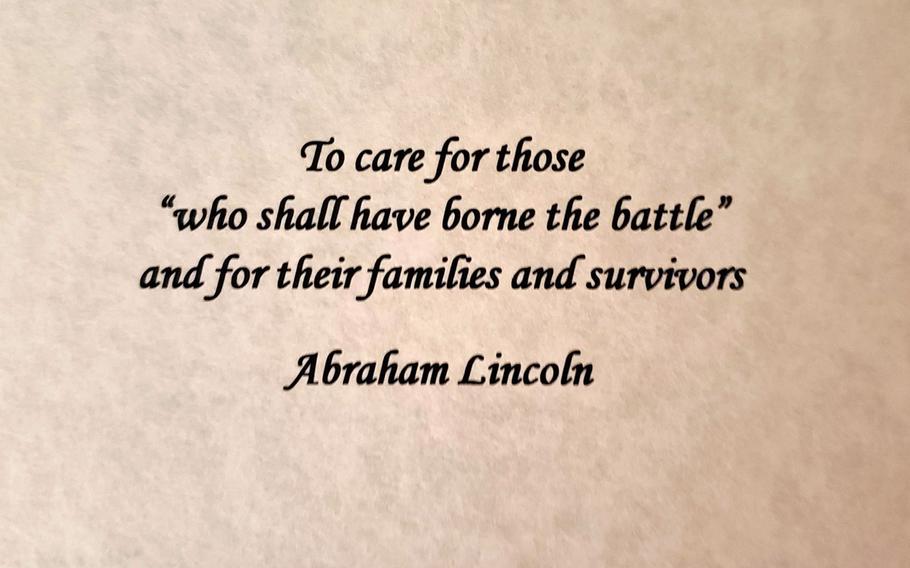 This altered motto was published in the back of programs provided at Department of Veterans Affairs headquarters in Washington. The agency’s official motto is a quote from President Abraham Lincoln’s second inaugural address in 1865: “To care for him who shall have borne the battle and for his widow, and his orphan." (Nikki Wentling/Stars and Stripes)

WASHINGTON — The Department of Veterans Affairs made a mistake — not a policy change — Tuesday when it published a gender-neutral version of its motto on official event programs, an agency spokesman said.

The altered motto was published in the back of programs provided at VA headquarters in Washington during the launch of a new benefits appeals process. It read, “To care for those ‘who shall have borne the battle’ and for their families and survivors,” and was attributed to President Abraham Lincoln.

The agency’s official motto is a quote from Lincoln’s second inaugural address in 1865: “To care for him who shall have borne the battle and for his widow, and his orphan.”

“The language on the program is incorrect,” read a VA-provided statement. “VA’s policy on the use of Lincoln’s direct quote as our mission statement remains unchanged ... and is consistent with the views of many veterans.”

The motto, which has been the same for nearly 60 years, has been a point of recent controversy. Iraq and Afghanistan Veterans of America, a national veterans organization, described the motto as sexist, outdated and exclusionary and has fought to change it since 2017.

Two House lawmakers sought make the change official. Reps. Kathleen Rice, D-N.Y., and Brian Mast, R-Fla., introduced legislation to have the motto read: “To fulfill President Lincoln’s promise to care for those ‘who shall have borne the battle’ and for their families, caregivers, and survivors.” There was little movement on the bill before the end of the 115th Congress.

The VA rejected the idea of changing the motto and insisted it would continue to use the original Lincoln quote. In July 2018, then-VA Acting Chief of Staff Jacquelyn Hayes-Byrd issued an agency-wide message telling all employees to not paraphrase or alter the motto on official documents or anything else.

“The use of ‘him’ is to assume gender neutrality in this historical usage and context,” Hayes-Byrd wrote at the time. “VA is proud of Lincoln’s words as a historic tribute to all veterans, including women veterans, whose service and sacrifice inspire us all.”

Melissa Bryant, chief policy officer for Iraq and Afghanistan Veterans of America, reacted Tuesday on Twitter to the VA’s use of a gender-neutral motto.

“This is all IAVA and others have been asking for,” Bryant tweeted. “Recognition of all veterans.”

After the VA claimed the altered motto on the event program was a mistake – not a policy change – Bryant was still optimistic and described it as a “good signal.”

“I know it has a groundswell within the workforce,” Bryant said Wednesday. “It’s something that’s taking hold. It’s a movement that’s beginning to grow, but it still hasn’t crystalized at the highest levels of the VA yet. That’s what IAVA is waiting on – that official change in policy.”