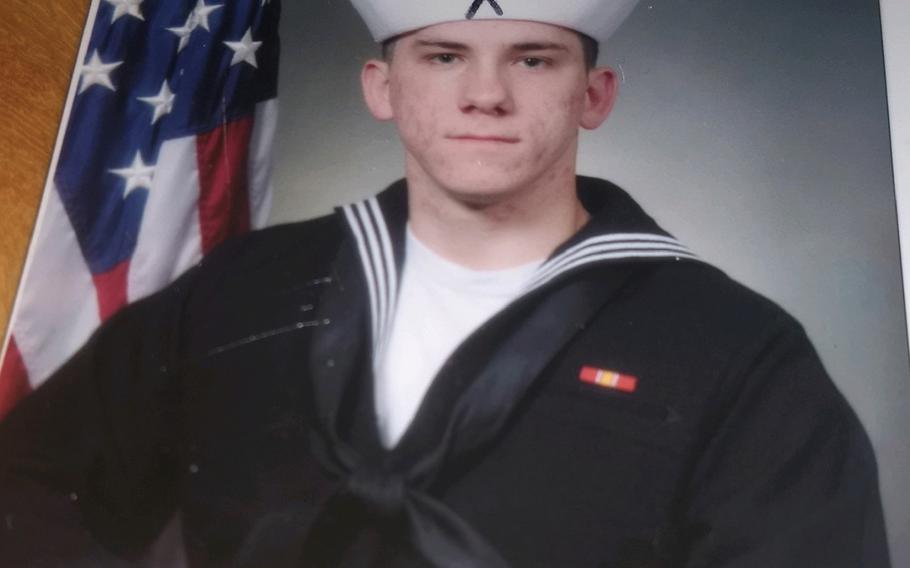 Navy veteran Gary Pressley killed himself in April 2019 in the parking lot of the Carl Vinson VA Medical Center in Dublin, Ga. His mother, who filed a wrongful death claim this week, says Pressley's VA doctor acted negligently when he cut off pain medication. (Pressley family)

WASHINGTON — The mother of a Navy veteran who killed himself in the parking lot of a Department of Veterans Affairs hospital last year filed a wrongful death lawsuit this week, accusing the VA of negligence in her son’s death.

Machelle Wilson of Forysth, Ga., is seeking $8.25 million from the VA. Her claim states that a VA doctor abruptly discontinued her son’s opioid prescription, which he used to manage chronic hip and back pain. The lack of medication caused him to suffer pain and withdrawal symptoms and pushed him into crisis, the claim says.

Gary Pressley, 28, a former aviation ordnanceman in the Navy, shot himself in the chest April 5 in the parking lot of the Carl Vinson VA Medical Center in Dublin, Ga. He had just left the hospital’s pharmacy, where he tried in vain to have his pain medication refilled.

“Nobody listened to him,” Wilson said. “The signs were all there.”

Before shooting himself, Pressley wrote a note and placed it on the dashboard of his car. In part, it read, “This is what happens by punishing already suffering people.”

‘He was strong’ Last year, Pressley’s suicide was one of three during a five-day period on VA property. The deaths prompted scrutiny from Capitol Hill, where lawmakers held a hearing and news conference to draw attention to the issue.

At the time, it was unclear why the veterans had killed themselves and what had prompted them to do it on VA property. In a quest to find answers, House lawmakers passed legislation that would require the VA to notify Congress of suicides at VA campuses and provide information about the veterans, including an explanation of their most recent encounters with VA employees. The bill has not yet been approved by the Senate.

In her son’s case, Wilson wants people to know how he had suffered and what drove him to shoot himself.

“I definitely need his story to be told, because this was uncalled for,” she said. “He didn’t need to take his life if he would’ve gotten the help he needed.”

Wilson described her son as a positive person, an “all-American boy” and always the comedian in a group of people.

He was an aviation ordinanceman, responsible for handling and servicing weapons and ammunition carried on Navy aircraft. He deployed in 2010 to Haiti to help with disaster relief following the catastrophic earthquake. One of his final evaluations in 2012 described him as “dedicated and hardworking,” “meticulous,” “focused and productive” and “a total team player who produces quality results with little to no supervision.” He was said to possess “unlimited potential” and was recommended for retention and promotion.

A car wreck in 2012 ended his military service and left him with chronic pain. He had planned on a long military career, but after the wreck he developed a new plan for his life, Wilson said.

At the time of his death, Pressley had just bought his first home. He was taking business classes and working at an auto parts store. He dreamed of a family, and of opening his own auto shop with his stepfather.

“He was a stand-up guy,” Wilson said. “He fought hard to have the life he wanted, even after the accident. He was strong.”

Private doctor unpaid Pressley returned to Georgia after leaving the military. As a result of his injury, he was treated at Carl Vinson VA Medical Center. Opioids were part of his pain management routine.

Pressley was under VA care from 2013 to 2018, when his VA doctor referred him to a private medical provider. He developed a good relationship with his private doctor, but in February 2019 she stopped treating veterans. The agency owed her thousands of dollars in reimbursement for treating VA patients, the claim states.

Wilson blames the VA’s lack of payment for her son’s eventual suicide. The wrongful death claim states that Pressley’s suicide could have been prevented “if the VA would have honored its financial obligation” and reimbursed his doctor.

“The VA needs to make some changes,” Wilson said. “If they could’ve paid their bills, he would’ve still been going there.”

Pressley received treatment from a private doctor through the Veterans Choice Program, which was established by Congress in 2014 following the VA wait-time scandal.

Soon after the Choice program launched, private medical doctors criticized the VA for being slow to reimburse them for treating veterans. As early as 2015, some private providers started to turn away VA patients because of the lack of payment.

The Choice program ended last year with the launch of the VA Mission Act, which aims to create new networks of private care for veterans. But even under the new program, concerns persist.

During a Senate hearing earlier this month, multiple senators questioned the VA’s ability to reimburse the private providers who care for veterans under the Mission Act. Sen. Mike Rounds, R-S.D., said two large health care providers in his state are collectively waiting on more than $5 million in reimbursements from the VA.

The agency is working through 2.5 million backlogged claims from private providers, said Kameron Matthews, the VA’s assistant undersecretary for health for community care. The total inventory of claims stands at 3.4 million. The VA hopes to eliminate the backlog by Sept. 30, the end of the fiscal year, she said.

In Pressley’s case, he immediately notified the VA in February 2019 that his doctor was no longer accepting him as a patient. He requested a pain consultation, which was never scheduled, the claim states.

By March 2019, Pressley was out of pain medication, and he contacted the VA again. The hospital told him he couldn’t get a prescription until he was seen by a doctor.

On April 5, the day of his death, Pressley made five calls and one visit to the VA. He spoke to four people about his need for medication.

“While waiting, Gary lost all hope,” the claim reads.

The lawsuit alleges that Pressley’s VA doctor should have known better. Wilson and her attorney, Peter Bertling, brought attention to an article written by VA Secretary Robert Wilkie six months before Pressley’s suicide. In it, Wilkie warned that any reduction in a patient’s use of opioids should be done carefully.

“Otherwise, patients could be driven to crisis by both the effects of withdrawal and ineffective pain management,” Wilkie wrote.

‘Devastated’ Included in Wilson’s wrongful death claim is a photo of Pressley as he was found that day: sunglasses on, the left side of his short-sleeved polo drenched in blood, slumped against the door, with his right arm draped over the center console. The death certificate, also included with the lawsuit, said Pressley died of cardiopulmonary arrest, the sudden loss of heart function.

Pressley’s sister, Lisa Johnson, tried to warn VA police. Pressley had contacted his family to let them know he was in crisis. The hospital in Dublin, Ga., was two hours away from their home in Forsyth, so Johnson called the VA hospital, the claim states.

The lawsuit alleges that hospital staff were not properly trained about how to respond to calls like Johnson’s.

“Lisa told the operator exactly where he was located based on his GPS signal,” the claim reads. “No one from the VA attempted to locate or assist Gary, who was on the brink of death.”

VA police found Pressley in his car just after 5 p.m.

In the 10 months since his death, Wilson has suffered anxiety and depression, she said. She also quit her job of 15 years because of the grief.

“I’m unable to get out of bed most days,” Wilson said. “I’m taking medication, going to therapy. I no longer have a job. I tried to go back to work, but I couldn’t do it. It’s devastated us emotionally and financially.”

No comment In response to questions about Wilson’s lawsuit, VA Press Secretary Christina Mandreucci said Friday that the VA does not comment on pending litigation.

She said suicide prevention remains the agency’s top clinical priority and pointed to efforts the VA has undertaken to reduce veteran suicide, including the PREVENTS initiative. President Donald Trump created the initiative with an executive order last year. Its task force includes the secretaries of Veterans Affairs, Defense, Health and Human Services and Homeland Security, and its purpose is to “mobilize every level of American society” to address the veteran suicide crisis, Trump promised.

The VA’s budget request for fiscal 2021, released earlier this month, gives $53.4 million to the task force. More details about the task force’s plan are expected to be announced next month.

Last year, just one week after Pressley’s suicide, senators heard from Richard Stone, executive in charge of the Veterans Health Administration. Some senators questioned him about Pressley’s death, as well as the two others that had occurred that week on VA property.

Stone said suicides on VA property accounted for less than 1% of veteran suicides overall and urged lawmakers to look at the broader picture.

“The fact that help was a few feet away is deeply troubling,” Stone said at the time. “But yet, even if we fix that problem, 99.6% of veteran suicides are not occurring on our campuses. There are those who would like to indict the VA. I would caution you, this is not as easy as having just a few more policemen to go through parking lots. This is about a whole-of-society approach.”