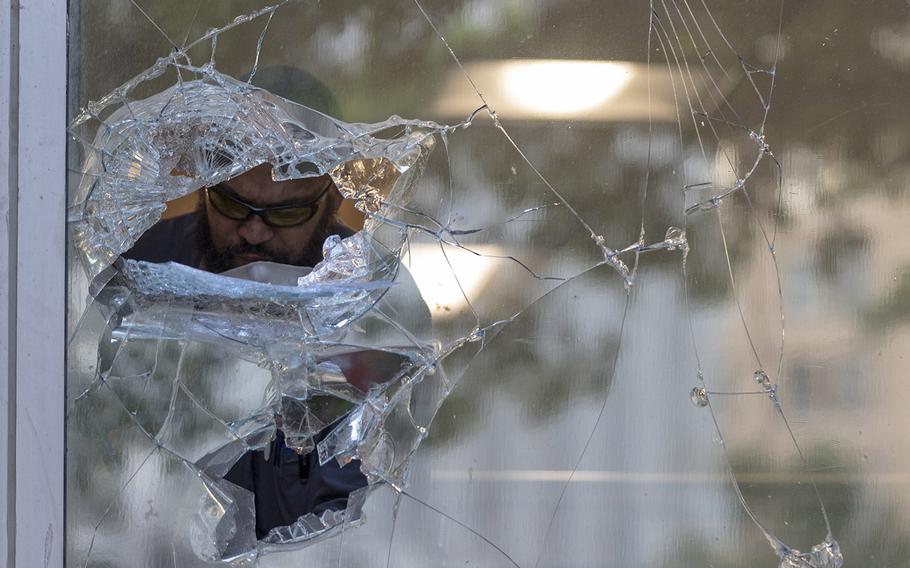 A man is seen through a shattered window at the Department of Veterans Affairs as he cleans up glass in Washington, Monday, June 1, 2020, after a night of protests over the death of George Floyd. Floyd died after being restrained by Minneapolis police officers. (Carolyn Kaster/AP)

A man is seen through a shattered window at the Department of Veterans Affairs as he cleans up glass in Washington, Monday, June 1, 2020, after a night of protests over the death of George Floyd. Floyd died after being restrained by Minneapolis police officers. (Carolyn Kaster/AP) 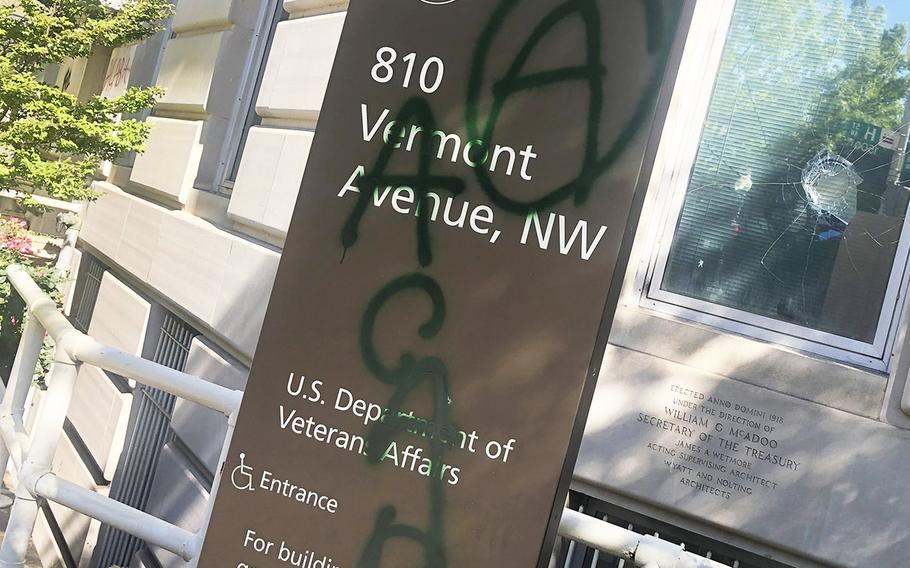 Damage at the Department of Veterans Affairs headquarters in Washington, Sunday, May 31, 2020, after a night of protests. (Michael Balsamo/AP)

WASHINGTON – Department of Veterans Affairs offices in downtown Washington were vandalized as peaceful weekend protests over George Floyd’s death devolved into clashes with police and destruction. In the aftermath, Mayor Muriel Bowser said Monday that the city would enforce a 7 p.m. curfew Monday and Tuesday.

“We applaud the American spirit of protest,” Bowser said. “However, we do not – and we will not – allow the continued destruction of our town.”

VA Press Secretary Christina Noel said VA headquarters, along with other buildings in downtown Washington that house VA offices, were spray-painted with graffiti. There was some broken glass, she said. The extent of damage was uncertain Monday morning.

“We are assessing the cost of the damage,” Noel said. “We know of no injuries to VA employees. VA will take appropriate measures to ensure the safety of VA employees.”

VA headquarters, at 810 Vermont Ave., is on the other side of Lafayette Square from the White House. The area was a gathering spot for protests Friday, Saturday and Sunday and became the site of destruction after nightfall.

Demonstrators came together in multiple U.S. cities to protest the death of Floyd, an unarmed black man in Minneapolis who was pinned down by police Monday. Officer Derek Chauvin was arrested Friday and charged with third-degree murder and manslaughter. The death ignited outrage across the country.

The protests in DC started peacefully. After dark, protesters tired to break through police barricades around the White House and were met with pepper bullets and tear gas.

Peter Newsham, the chief of the Metropolitan Police Department in DC, said as the day progressed Sunday, “we saw a significant increase in purposeful destructive behavior.” He said DC police made 88 arrests and warned there would likely be more.

According to multiple news outlets, cars and buildings were set on fire, and vandals smashed windows.

At DC headquarters, at least one window was smashed. Zack Stanton, a digital editor with Politico Magazine, posted photos of the damage on Twitter, showing the building tagged with derogatory graffiti targeting President Donald Trump spray-painted across the front doors.

Across the street sits the Lafayette Building, which is also owned by the VA. Many of its windows were smashed Sunday night, the Washington Post reported.

DC memorials were also vandalized over the weekend. At the National World War II Memorial, someone spray-painted the question, “Do black vets count?” The official Twitter account of the World War II Memorial posted a photo of the graffiti and responded, “[The] question posed here conveys heartache, isolation and anger felt by many in [the] African American community. Answer: YES, the WWII Memorial remembers and honors the one million black men and women who served.”

The Veterans of Foreign Wars responded to the vandalism Monday. The organization said it stood in solidarity with the peaceful protests but condemned the damage to the World War II memorial.

“The VFW believes in peaceful, organized demonstrations. That is the right of every American,” VFW National Commander William Schmitz said in a statement. “However, we are extremely saddened and angered to find that our sacred World War II Memorial was defaced. The veterans who fought for the very freedom to demonstrate deserve better and we condemn those who determined the memorial was worth vandalizing.”

The graffiti was cleaned off the memorial Sunday.