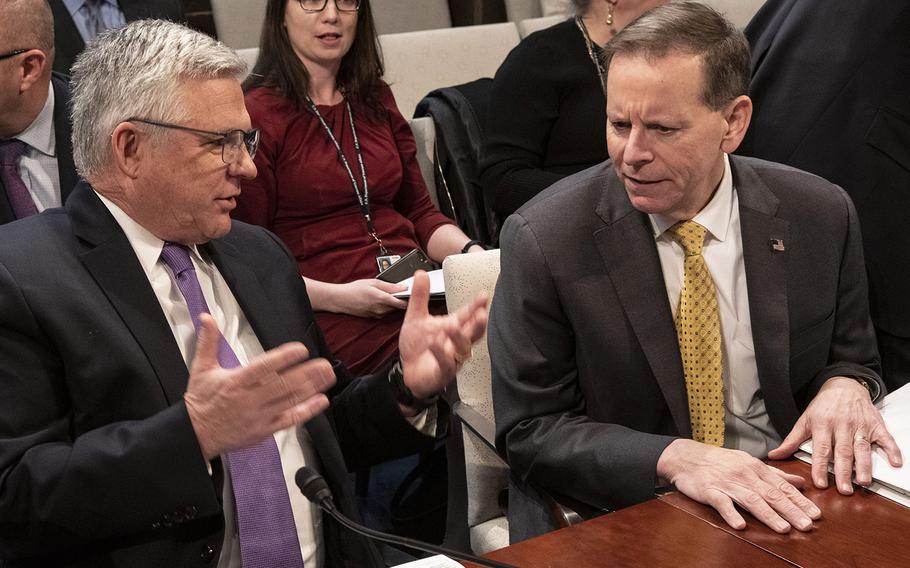 WASHINGTON — Department of Veterans Affairs Secretary Robert Wilkie on Thursday tried to ease fears about the potential spread of coronavirus, telling House lawmakers that the agency tasked with caring for more than 9 million troops and veterans is confident it’s prepared to handle an outbreak.

“We are testing our processes. We are making sure our supply chain is full,” Wilkie said when asked about coronavirus preparations by Rep. Mark Takano, D-Calif., during a House Committee on Veterans’ Affairs hearing. “We don’t need any extra money now.”

However, another department official said the agency would struggle if an outbreak got out of control and then they might need more resources.

“If this develops into a pandemic, in which parts of the American health system break down, we’re going to have a different conversation,” said Dr. Richard Stone, who is in charge of the Veterans Health Administration.

The exchange in the House hearing came as the battle to contain coronavirus entered a new phase Thursday, after the first case of the virus not linked to traveling abroad emerged in the United States.

Amid new cases spiking in the Middle East and Europe, the U.S. Centers for Disease Control and Prevention on Wednesday night reported a person in California has contracted the virus without traveling or coming in contact with anyone known to have the infection.

The United States has 60 known cases of the infection, with 59 of whom traveled to Asia or were in close contact with people who went there, according to the CDC. The bulk of people infected — 42 — had picked up the coronavirus while quarantined on a cruise ship off Japan.

A 23-year-old American soldier stationed at Camp Carroll in South Korea tested positive for coronavirus, the military reported Wednesday, the first U.S. service member infected. Earlier this week, the widow of a military retiree living in the nearby city of Daegu was also reported to have been infected.

The VA recommends a veteran call their local hospital before showing up in person if they have symptoms of coronavirus.