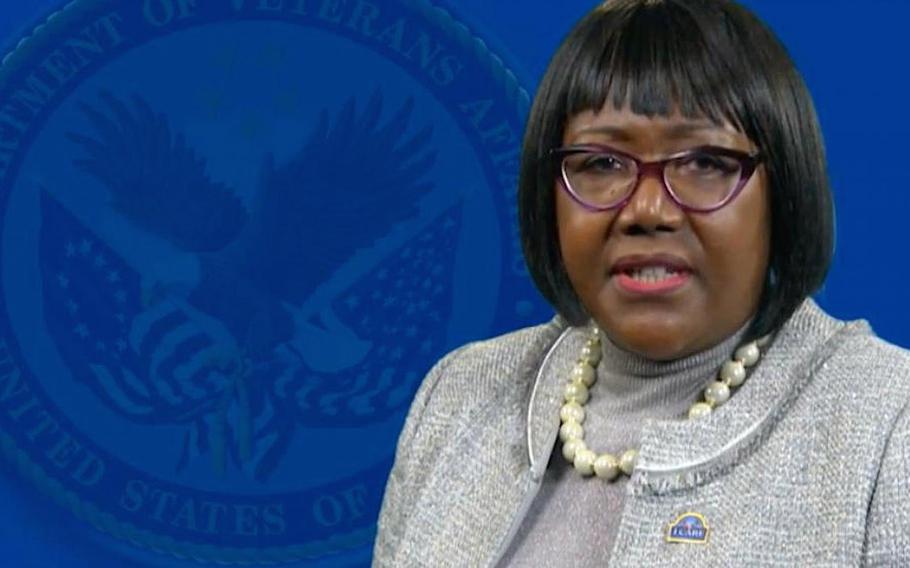 WASHINGTON – After two days of turmoil within the Department of Veterans Affairs, the VA chief of staff has resigned, following findings that she misled an ethics official into approving expenses for the VA secretary’s wife on a taxpayer-funded trip to Europe.

VA Chief of Staff Vivieca Wright Simpson called VA Secretary David Shulkin on Friday morning and informed him she was retiring, Shulkin told Stars and Stripes. In addition to the ethical violations, her retirement comes amid reports of internal strife at the agency between a White House appointee and longtime civil servants.

Wright Simpson, the third-most senior VA leader, worked at the VA for 35 years. She served as chief of staff since Feb. 27, and was Shulkin’s top aide when he was the undersecretary of health in 2016.

“I think this now is just a distraction we have to deal with,” Shulkin said in response to her retirement. “Any time you have a disruption of a team, it has the potential to slow down progress. We can’t just let that happen. The president has made clear he wants changes to the VA quickly, and that’s what we’re focused on doing.”

Her departure means another vacancy at VA headquarters, where top leadership roles have remained unfilled since the presidential transition. The VA will likely name an interim chief of staff and consult with the White House about filling the job, Shulkin said. He described her departure as a loss.

The announcement comes two days after VA Inspector General Michael Missal released a report detailing “serious derelictions” by VA personnel regarding a 10-day trip to Copenhagen and London, which included full days of leisure activities and cost taxpayers at least $122,000.

Investigators referred their findings about Wright Simpson to the Department of Justice, which declined to prosecute, though the actions might have violated criminal statutes, the report states.

Shulkin has repaid the U.S. Treasury $4,312 for Bari’s travel expenses and agreed to comply with the IG’s other recommendations. One of those recommendations was to decide whether the VA should take action against Wright Simpson.

“We are complying with all the recommendations,” Shulkin said Friday. “I’ve written checks to the Treasury, and we are following their recommendations related to the chief of staff. That’s clearly my intent.”

VA Spokesman Curt Cashour said later Friday that the VA was opening an investigation into Wright Simpson’s actions. He said there could also be other actions taken against VA personnel.

“President Trump has made clear that he expects VA leaders to hold themselves and other employees accountable when they fail to live up to the high standards taxpayers and veterans deserve,” Cashour said.

In response to the IG’s findings, Shulkin alleged someone might have hacked into Wright Simpson’s email account.

He told reporters Thursday: “We have found that somebody has taken over the chief of staff’s email and is sending emails like it’s her.”

However, on Friday, Shulkin backtracked, saying the hacking was separate from the altered email found by investigators.

On Wednesday, Shulkin was shown an email that appeared to be written by Wright Simpson, he said. It was a request to transfer money outside the VA and was flagged by the agency’s finance department as fraudulent, he said.

Shulkin said it was an isolated incident.

“To be clear, while VA is still currently investigating these hacking allegations, we have thus far found no credible or conclusive evidence of a compromise to our email system or a user’s account,” he said.

Media reports Thursday night shed light on infighting at the VA. The Washington Post obtained a copy of an email sent in December by Jake Leinenkugel, a White House adviser on veterans issues. It was titled “Jake’s Overview and Recommendations (Final Draft).” In it, he expressed distrust and frustration with Shulkin and proposed that the White House remove Wright Shulkin and Deputy Secretary Tom Bowman and put Shulkin “on notice to exit.”

According to the Washington Post, Leinenkugel wrote that Wright Simpson “is a Democrat who completely trusts the Secretary and it’s her job to protect him and her agenda.”

The memo named Michael Kussman, who served as undersecretary of health from 2007 to 2009, as a potential replacement. The New York Times reported Kussman has been associated with the conservative group Concerned Veterans of America, which is part of the Koch brothers political network and has been advocating on Capitol Hill for an aggressive expansion of veterans’ health care into the private sector.

Rep. Tim Walz, D-Minn., the top Democrat on the House Committee on Veterans’ Affairs, said Friday that he had long-speculated that affiliates of the Koch brothers were working to undermine the VA.

“This behavior is disturbing, represents the worst of Washington politics, and must be brought to a swift and decisive end,” Walz said in a written statement. “If President Trump truly puts the needs of veterans above all else, as we heard him say many times on the campaign trail, he needs to act immediately to distance his administration from forces who are using him as a pawn to achieve their long-standing goal of privatizing VA for their own financial gain.”

In response to questions about the memo, Shulkin said he wanted to extract anyone in the agency who may be attempting to undermine him. He said there had been no personnel changes at the VA as of Friday, other than Wright Simpson’s retirement.

“My job is to make sure all of us are focused on one goal and all focused on helping veterans,” he said. “I’m going to make sure everybody understands that if they’re working at VA, there job is to serve veterans and continue the work.”

While attempting to address divisions within the agency, Shulkin is also battling for his own survival in light of the report.

Rep. Mike Coffman, R-Colo., urged Shulkin to resign, stating that as a holdover from President Barack Obama’s administration, he’s part of a culture that needs rooted out. Other members of Congress have expressed disappointment in the ethical violations but seemed willing to allow Shulkin time to address them.

When asked Friday whether he had the confidence of the president, Shulkin said only that he is in “constant contact” with the White House.

Until recently, Shulkin — who was confirmed with unanimous support from the Senate — has mostly stayed clear of the discord that’s plagued some of Trump’s other Cabinet members. But over the last few months, he’s faced an escalating level of controversy.

Some of the division has been created because of ongoing negotiations into reforms of the VA Choice program, which allows veterans to seek private-sector medical care. White House officials have favored an approach in Congress that more aggressively expands options for veterans in the private sector. Shulkin has been working with senators on separate legislation that has bipartisan support.