US veterans face trial after peace protest in Ireland 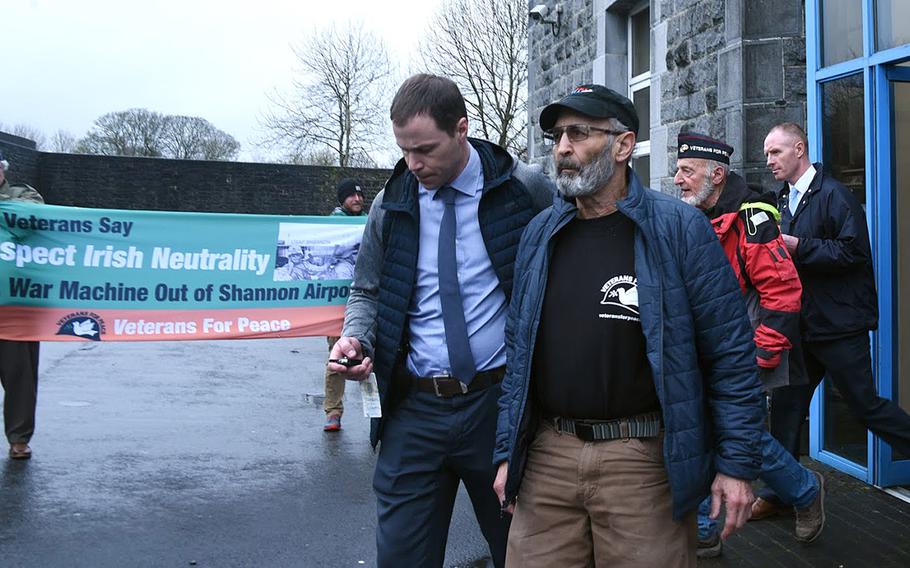 U.S. Veterans for Peace activists Ken Mayers and Tarak Kauff are shown following their March 18, 2019, arraignment in Ennis, Ireland.The veterans turned peace activists are awaiting trial on charges of trespassing in connection with allegations they approached a suspected U.S. military aircraft on layover at the Shannon Airport. (Ellen Davidson/Creative Commons)

Two US veterans turned peace activists are awaiting trial in Ireland on charges of trespassing in connection with allegations they approached what they believed to be a parked U.S. military transport at the Shannon Airport.

The men were taken into custody on St. Patrick’s Day.

The Irish Times reported that the two breached security in an effort to reach an aircraft they believed was used to transport U.S. troops. The men did not reach the aircraft and were detained by authorities.

The incident occurred during a protest over the use of Shannon Airport as a refueling stop for U.S. military flights.

Mayers, a U.S. Marine Corps veteran who served in the 1960s, is now a member of Veterans for Peace. Kauff joined the Army in 1959 and served for about three years, according to news reports.

The website, stopthesewars.org, which is focused on the plight of the two Americans, said the men were involved in a peaceful protest.

“The two walked across the air field with the intent of inspecting the plane for weapons or munitions, but were apprehended by airport security,” the website reported.