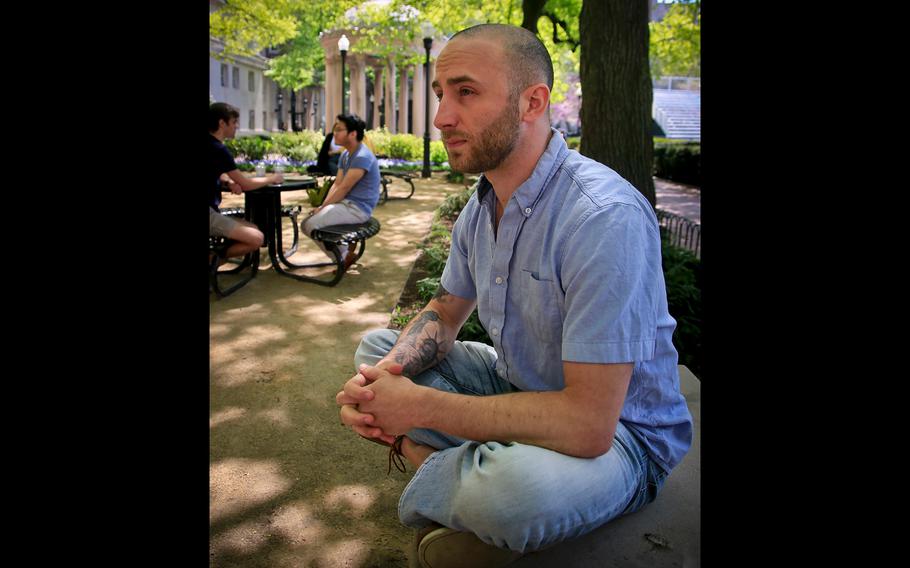 Iraq War veteran Kristofer Goldsmith, sits in a campus park after his last final exam of the semester at Columbia University in New York on May 9, 2018. (Bebeto Matthews/AP)

WASHINGTON — Veterans kicked out of the military due to negative behavior related to post-traumatic stress disorder, traumatic brain injury and sexual trauma have been upgrading their discharges after a 2017 law change, but there are potentially thousands of others left without access to care or benefits because of less-than-honorable discharges.

The landmark Fairness for Veterans Act, included in the 2017 military funding bill, aimed to help veterans upgrade their discharges. It requires a review from military officials to consider medical evidence to see whether mental illness or injury led to the discharge.

Since the measure went into effect, 1,580 veterans have upgraded their discharges through 2019, according to the most recent Defense Department data.

Despite the boost and efforts from Congress, some say a shockingly low number of veterans are applying for upgraded discharges.

Sen. Gary Peters, D-Mich., who introduced the bill in the Senate, said last week that he is happy with the early results of his bill, but is concerned there is a large number of veterans who do not know they can upgrade their discharge.

“I suspect the number who qualify is much higher,” Peters said. “I think a lot of veterans with less-than-honorable discharges are suffering from PTSD and simply do not know that there is a way to have that discharge evaluated. … You could be talking about thousands of vets.”

Leaving the military with any type of discharge other than honorable can cripple a veteran’s life and can be a huge hurdle to obtaining benefits. A general discharge disqualifies a veteran from the GI Bill benefits. An other-than-honorable discharge still allows veterans to seek health care from the Department of Veterans Affairs, but they often are turned away improperly.

For decades, thousands of veterans with other-than-honorable discharges were turned away from the VA unlawfully, according to a study by Veterans Legal Clinic at Harvard Law School and the gay veterans group OUTVETS, released in March. The mass denial of benefits since 1980 has left about 400,000 at risk without care, the study found.

Discharges that are other-than-honorable, including general discharges, are given for misconduct ranging from alcohol abuse, drug use and insubordination, but those infractions rarely result in courts-martial, meaning the service member never has their day in court and never gets due process. Those discharges are referred to as “bad paper” because of the negative consequences they have and the stigma they can carry.

Peters’ 2017 measure expanded a memo issued by former Defense Secretary Chuck Hagel in 2014. The memo called on the Department of Defense to give the benefit of the doubt to Vietnam veterans who sought to correct their military records, contending PTSD could have contributed to their discharges.

Kristofer Goldsmith started drinking heavily after his deployment to Iraq in 2005 with the 3rd Infantry Division as a forward observer. The day before what would have been his second deployment, he tried to commit suicide.

Goldsmith, founder of the advocacy group High Ground Veterans, said his chain of command had no sympathy — there was no room for mentally or physically compromised soldiers during the peak of the post-9/11 wars. He was given a general discharge for malingering and for missing the plane for deployment when he was in the hospital. The discharge cost him his GI Bill benefits.

“I went from being the golden boy to being treated like a criminal,” he said. “The people making these decisions about bad paper discharges are not mental health professionals. They see things through a narrow lens. That lens is their unit’s deployability. Every service member who is sick or injured is working against each commander’s deployability. The fastest way for a commander to make their numbers look better is to shovel these people out as quick as they can.”

Goldsmith applied four times to have his discharge upgraded before he got an honorable discharge based on his PTSD diagnosis.

He has lobbied hard for Congress and veteran service organizations to take bad paper discharges seriously. He said he had to fight decades of stigma that those veterans were not worth saving, despite being the most vulnerable for economic hardship, incarceration and suicide.

“There wasn’t a lot of sympathy, not just in the halls of Congress, but in the veteran community and VSO community,” Goldsmith said. “There was this half-century-long idea that the guys were not worth saving.”

Goldsmith, Peters and other veteran and military policy experts agree the stigma of bad paper is waning as more people understand what’s at stake for veterans.

Getting an upgrade is not easy. It can involve legal hurdles and a lengthy bureaucratic process.

Danica Gonzalves is the program director of the Veterans Consortium Discharge Upgrade Program, which provides free legal assistance to veterans seeking upgrades. She said none of her clients was contacted by the Defense Department or the VA about their discharge options. Some had VA officials tell them about the potential to upgrade when they were denied benefits.

“Unfortunately, a lot of the burden falls on the veteran,” Gonzalves said. “They don’t understand they have the burden, and they don’t know what they need to supply to overcome that burden.”

By law, the review boards are supposed to lean on the veteran’s side, she said, but veterans have to be totally prepared.

“If they fail to supply mental health records, they have to find evidence or the board will not side with them,” Gonzalves said.

A veteran needs to have a diagnosed mental health disorder before submitting a request to his or her branch’s review board. Without the diagnosis, Gonzalves said the request is likely dead on arrival. A diagnosis could come post-service, but a doctor would need to note that it was service-connected and that the veteran had the issue before the event that caused them to be discharged.

Gonzalves said review panels are supposed to have a medical expert, but sometimes that person doesn’t have a mental-health background.

“It should be a psychologist or a psychiatrist,” Gonzalves said. “It just has to be a physician. There are times when that physician doesn’t have adequate mental health training.”

Mental health professionals are more likely to understand how a veteran’s PTSD is connected to sexual violence or war. Poor documentation from the veteran — including that of a solid diagnosis — is the key reason for he denial of an upgrade, according to Gonzalves.

In Goldsmith’s case, he said a foot doctor sat on his second review board to decide whether his mental health led to the heavy drinking and the suicide attempt.

Even when veterans make their appeals with the proper documentation and come armed with lawyers, the process still takes a long time. Gonzalves said she has an 80% success rate with her clients. She said that the Navy review board, which includes the Marine Corps, is the harshest, but only takes three to six months to make a decision.

The Army can take up to three years, leaving many veterans in limbo waiting for benefits. Gonzalves said there’s no specific reason for the Army’s lengthy delays, and that those delays have serious consequences.

“They are supposed to have decisions in 18 months and decisions are taking three years,” she said. “It’s a major issue, they make up excuses, they will say they have too many applications. They will say they cannot do as many medical advisory opinions.” And that makes it difficult with older Vietnam veterans.

“I have clients that are dying waiting for their discharges to be upgraded.”