The difference a home makes 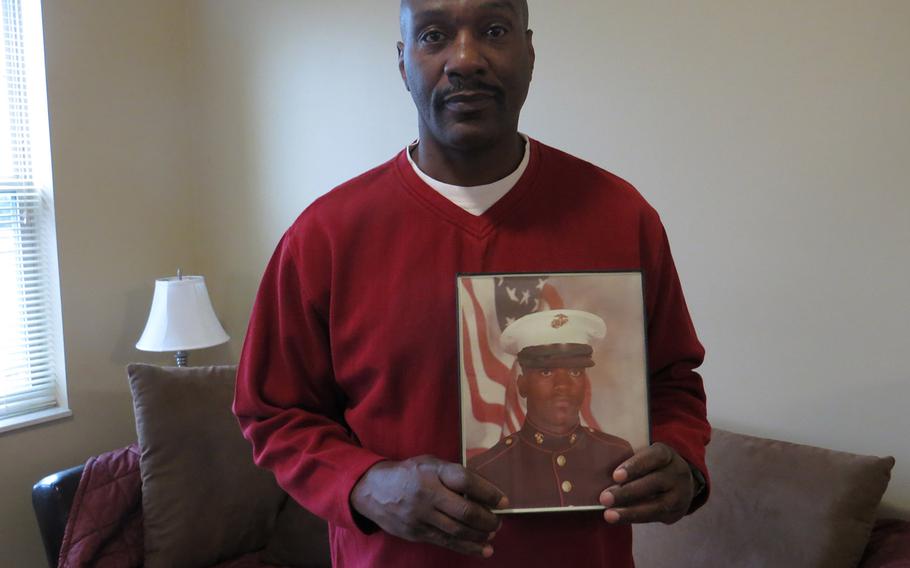 Travis Goodman, who joined the Marines in 1978 for a three-year stint, was homeless for more than a decade before moving into the Commons at Livingston in Columbus, Ohio, in 2012. The permanent supportive housing community provides one-bedroom apartments to disabled and homeless veterans. (Martin Kuz/Stars and Stripes)

Travis Goodman, who joined the Marines in 1978 for a three-year stint, was homeless for more than a decade before moving into the Commons at Livingston in Columbus, Ohio, in 2012. The permanent supportive housing community provides one-bedroom apartments to disabled and homeless veterans. (Martin Kuz/Stars and Stripes) 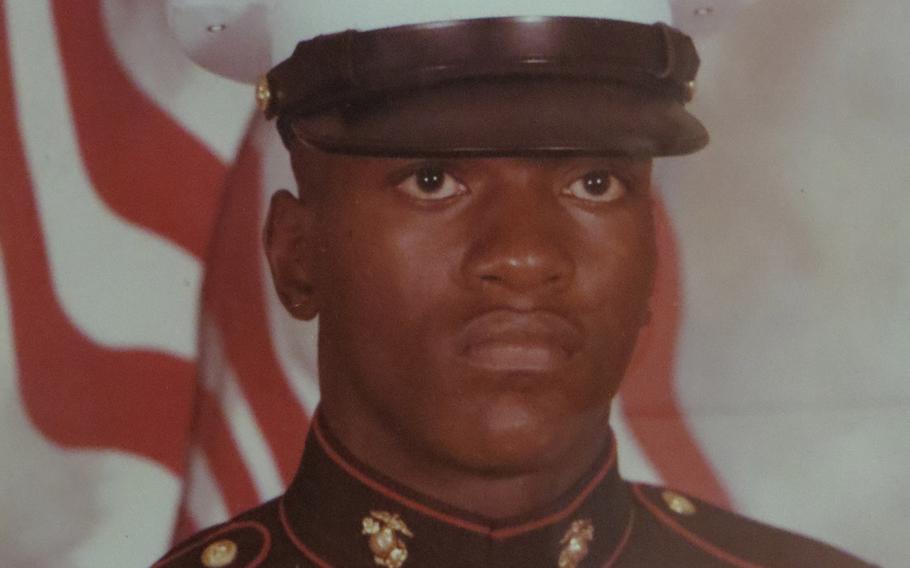 Travis Goodman served a three-year stint in the Marines starting in 1978, and later was homeless for more than a decade before moving into the Commons at Livingston in 2012. (Martin Kuz/Stars and Stripes) Travis Goodman, a former Marine, lives in a one-bedroom apartment at the Commons at Livingston. "I don't know where I'd be if I hadn't ended up here," he said. "Probably back in jail or dead." (Martin Kuz/Stars and Stripes) 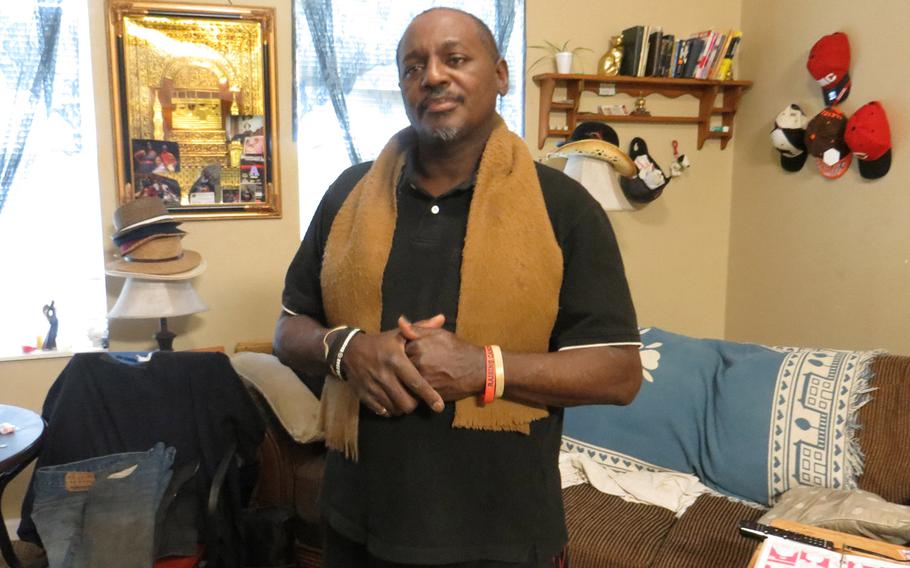 Blaine Ware, a former Marine who left the service in 1983, has lived at the Commons at Livingston in Columbus, Ohio, since 2012. The permanent supportive housing community provides one-bedroom apartments for disabled and homeless veterans. (Martin Kuz/Stars and Stripes)

Slipping into an empty home after nightfall and vanishing before daybreak reduced the risk that a neighbor would spot him and call police. If he moved only in the dark, he could sleep unnoticed in the same house for days, sometimes weeks.

But now and then alcohol and pot loosened his discipline. The cops would show up and arrest the former Marine, charging him with trespassing or drug possession or both. He might stay in a homeless shelter for a stretch before resuming his particular style of house hunting.

Goodman worked a string of construction and warehouse jobs that earned him enough to afford a place of his own. He chose instead to invest in his vices, and when money ran short, he turned to petty theft and check forgery. There were more short stints in jail as lessons went unlearned.

He spun in that cycle for more than a decade until the day in 2011 when he received a call from his sister. She had seen a report on TV about a new housing community for disabled and homeless veterans. She urged him to apply for an apartment there.

The call coincided with his growing sense that he needed to change. The old military man felt hollowed out in body and mind.

In summer 2012, he received approval to move into the Commons at Livingston, a red-brick, three-story housing complex of 50 one-bedroom units run by National Church Residences. The nonprofit housing provider, based in Columbus, expanded the campus last year, doubling its capacity to house 100 veterans.

A framed portrait of Goodman as an 18-year-old private stands on a table in his apartment. The young man in the uniform now appears more familiar to him in some ways than the version of himself who first arrived at the Commons.

He has been sober for more than two years. He holds a part-time maintenance job and attends classes as he pursues a GED. He started dating a woman last year and spends more time with his three siblings, who live in the city.

The purpose of his life has transcended the impulse to invade and evade, to “go in late, get out early.”

“I don’t know where I’d be if I hadn’t ended up here. Probably back in jail or dead,” he said. Large windows let in the day’s pale light as he relaxed on an amply pillowed sofa, arms splayed, his voice as serene as his manner. “I have goals now. Direction.”

Stable housingGoodman counts among the more than 26,000 former servicemembers who have migrated from the country’s streets and homeless shelters into stable housing since 2010. The population of homeless veterans topped 76,000 at the time. The number had fallen below 50,000 last year in a survey by the Department of Veterans Affairs. (The agency conducted its annual survey of homeless veterans this week and will release the findings later this year.)

A five-year national campaign to end homelessness among veterans, launched by President Barack Obama in 2010, has propelled efforts to bring them into permanent supportive housing. The model combines a comfortable living space among their own with ready access to job, medical and counseling services.

Funded through local, state and federal programs, the Commons resembles an independent living facility for seniors. Each apartment includes a kitchen, bedroom and bathroom, and there’s a large hall for group gatherings and computer, fitness and laundry rooms. Residents sign a renewable one-year lease and are allowed to stay indefinitely, paying monthly rent equal to 30 percent of their income, or no less than $50.

VA social workers and case managers work out of offices in the building, and every week there are regular visits by physical and occupational therapists, behavioral health providers and job and education counselors. Apart from job or education training for the unemployed, the services are made available without requiring tenants to take part, creating an ethos of autonomy that nurtures their dignity.

“What we’ve seen for the most part is that veterans want to get better,” said Robyn Haycook, a support services coordinator with National Church Residences. “They’ll generally seek the help they need once they’re here. But it’s important for them to feel that it’s their decision, and we want them to have that independence.”

The rate of homelessness among veterans nationwide remains twice that of those who have never served in the armed forces. Returning to the civilian world can inflame feelings of isolation for veterans as they mourn the loss of their military identity. The sense of estrangement often persists even for those who cope without retreating to the streets.

Living with fellow veterans in permanent supportive housing offers a healing camaraderie, an oasis of shared experience and empathy. “For some of them, being here is the first time they’ve felt connected to anyone since they got out of the military,” Haycook said. “They feel like they’re part of something again.”

The presence of others who wore the uniform has comforted Chris Eckert. The Army veteran, who mustered out in 1996 after six years, lost his warehouse logistics job in 2013. His savings had drained away by early last year, and he wound up in a homeless shelter for several months before moving into the Commons in September.

“This has been like a safe haven for me,” said Eckert, 45, who struggles with seizures and the effects of a brain tumor that impairs his vision.

“I wish the things that brought me here hadn’t happened. But at the same time I feel lucky to be here because I’m around people who understand. There’s just a bond you feel with another veteran that you can’t get with somebody else.”

A second shotThe Commons blends into a milieu of residential and commercial properties on the east side of Columbus. Five years ago, in the project’s early stages, the “crazy vet” stereotype shadowed its development, with some residents and business owners nervous about housing former servicemembers in the area.

A similar strain of anxiety has run through other cities, and projects have been scuttled or scaled back as a result. Around the Commons, meanwhile, the divide between the civilian and military realms appears to have dissolved. Veterans from the complex participate in the neighborhood’s “block watch” aimed at deterring crime and mingle with residents at community events.

Michael Preston, a regional director for National Church Residences, ascribed the area’s acceptance of the campus mostly to the passage of time. “I think that as we’ve gone along people have taken into consideration that these veterans served our country, and we need to do right by them,” he said.

In the common perception of permanent supportive housing, shaped in no small part by the term itself, tenants stay for good. In practice, and contrary to the criticism that such housing amounts to “veteran welfare,” the Commons staff encourages residents to reintegrate into their communities and families as their recovery evolves.

“The goal is for them to reach independence,” Haycook said. “It isn’t something that’s forced. But we want them to eventually live in the community again without the need for the intensive services we give them here.”

Blaine Ware found himself homeless after the death of his girlfriend three years ago. The former Marine, who left the service in 1983 after four years, initially resisted asking for help.

“It was hard,” said Ware, 55, who grew up in Dayton, Ohio. “I’m supposed to serve others, not have others serve me.” Yet his time at the Commons has enabled him to land a job at a retail clothing chain and prepare for moving out in the next year or two.

“I’ve been fortunate to have this opportunity to put my life back together,” he said. “I’m not sure what I would have done otherwise.”

For Travis Goodman, who lost so many years to alcohol and drugs and self-inflicted inertia, the Commons represents redemption. He plans to collect his GED later this year and switch to full-time work, and if he saves enough money, the man who once skulked into houses hopes to someday buy one.