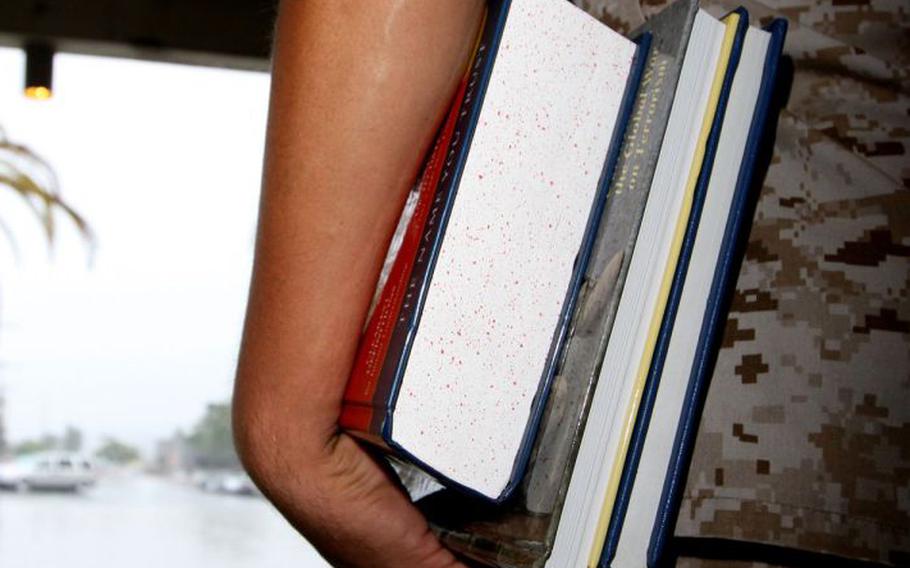 Congress approved a bill Wednesday that lawmakers described as an end-of-year omnibus bill for veterans. The bill is more than 340 pages long and includes a sweeping set of provisions strengthening the GI Bill and cracking down on predatory schools. ()

WASHINGTON — A mammoth veterans bill approved by Congress on Wednesday increases legal protections for GI Bill benefits and aims to further scrutinize schools with a history of taking advantage of beneficiaries.

A key provision would require the Department of Veterans Affairs to analyze whether schools facing legal or punitive actions from the government should be cut off from GI Bill money, a critical protection clause that has been lobbied for by advocates for more than a decade.

Carrie Wofford, president of the advocacy group Veterans Education Success, said Thursday that the VA has very limited standards for schools at which veterans and their families are permitted to use their education benefits.

Veterans Education Success has accused the VA of not abiding by a section of The Vietnam Era Veterans’ Readjustment Assistance Act of 1974, which prohibits schools from participating in the GI Bill if they utilize “advertising, sales or enrollment practices of any type which are erroneous, deceptive, or misleading either by the actual statement, omission or intimation.”

Wofford said Wednesday’s new bill is a welcomed big first step, though more work still needs to be done to crack down on predatory colleges and assure students veterans don’t get roped into wasting their benefits at bogus schools.

In 2018, the VA inspector general warned the department could waste $2.3 billion in payments to “ineligible colleges” during the next five academic years. In the bulk of cases, the payments would go to for-profit universities or bogus schools.

Veterans have long been the targets of aggressive recruiting by for-profit colleges, which are required to get at least 10% of their revenues outside of federal student loans or grants. The so-called “90/10 loophole” allow veterans’ benefits to count toward that 10%.

Because of this loophole, the for-profit school industry has drawn intense scrutiny among some lawmakers and veteran advocates for conducting questionable business practices to recruit veterans. One for-profit school, the University of Phoenix, was required to refund $50 million and cancel another $141 million in debt for its marketing practices toward GI Bill recipients.

In October, the owner of a California trucking school was sentenced to four years in prison after admitting to recruiting veterans to take classes paid by the post-9/11 GI Bill. In many cases, the students never attended class and sought to pocket some of the GI Bill money for themselves. The owner, Emmit Marshall, was ordered to pay $4.1 million in restitution, according to U.S. prosecutors.

The bill also contains a measure that restores education benefits to students whose school was closed or later disapproved by the VA as long as they transferred fewer than 12 credits.

That provision follows a 2016 incident in which all ITT Technical Institute schools suddenly shut down and thousands of veterans who attended them were out of luck with the benefits that they used to go to school there.

The bill also protects students from VA debt collection for overpaid tuition. Previously, the VA could send a bill to students or turn them over to collection officials for any overpayments. The bill passed Wednesday moves the burden to the school to pay back the VA.

In 2014, a report from the Government Accountability Office found one in four veteran beneficiaries across 6,000 schools were impacted by overpayments that totaled $416 million. According to the GAO, this usually occurred because the VA pays the school based on classes that the students have scheduled at the start of the semester, but doesn’t take into account when students drop courses or withdraw from the school. In some cases, overpayments occurred due to processing errors by the school or the VA.

The bill allows students reverify their course load each month.

Other education provisions include allowing students to withdraw from school due to the coronavirus pandemic without losing their benefits and permitting foster children as dependents eligible for GI Bill benefits. Another change directs the VA to limit GI Bill benefits for veterans attending law school to institutions that are accredited.

Following the Senate’s approval last week, the House passed the bill Wednesday without any objections. It now heads to President Donald Trump’s desk for his signature.

The bill is named for Rep. Phil Roe, R-Tenn., who didn’t seek reelection this year, and Sen. Johnny Isakson, R-Ga., who resigned from the Senate at the end of 2019. Both men were leaders on their chamber’s veterans affairs committee.