Suicide's toll: Survey says half of vets know someone who has tried it 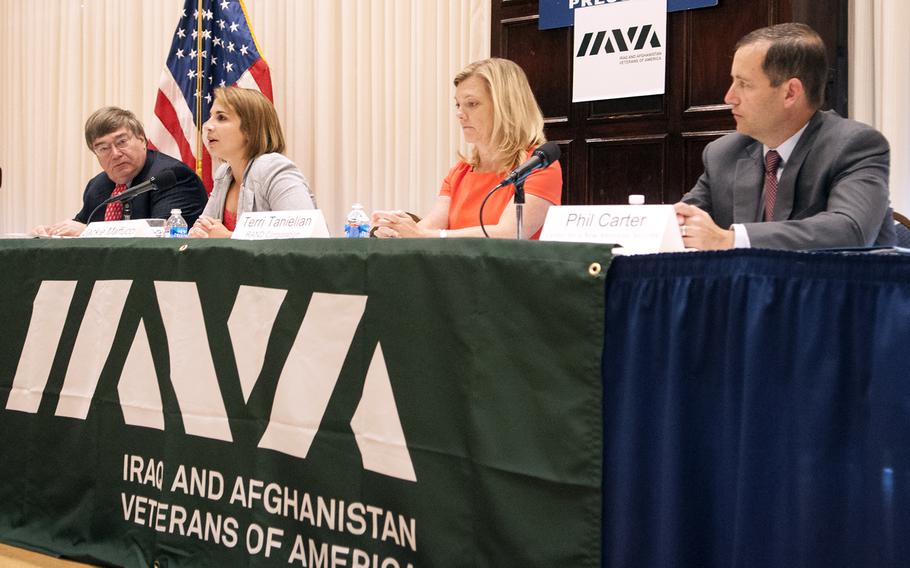 From left to right, Charlie Cook, Jackie Maffucci, Terri Tanielian, and Phillip Carter participate in a panel discussion of the IAVA survey results released during a press conference on July 14, 2014, at the National Press Club in Washington, D.C. (Meredith Tibbetts/Stars and Stripes)

From left to right, Charlie Cook, Jackie Maffucci, Terri Tanielian, and Phillip Carter participate in a panel discussion of the IAVA survey results released during a press conference on July 14, 2014, at the National Press Club in Washington, D.C. (Meredith Tibbetts/Stars and Stripes) 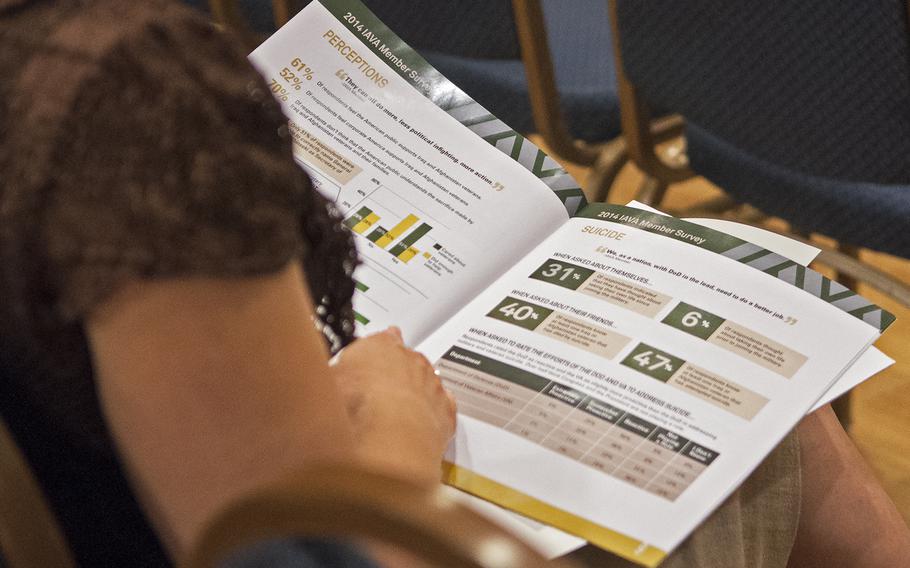 A woman reads statistics from the IAVA survey during their press conference at the National Press Club on July 24, 2014. (Meredith Tibbetts/Stars and Stripes) 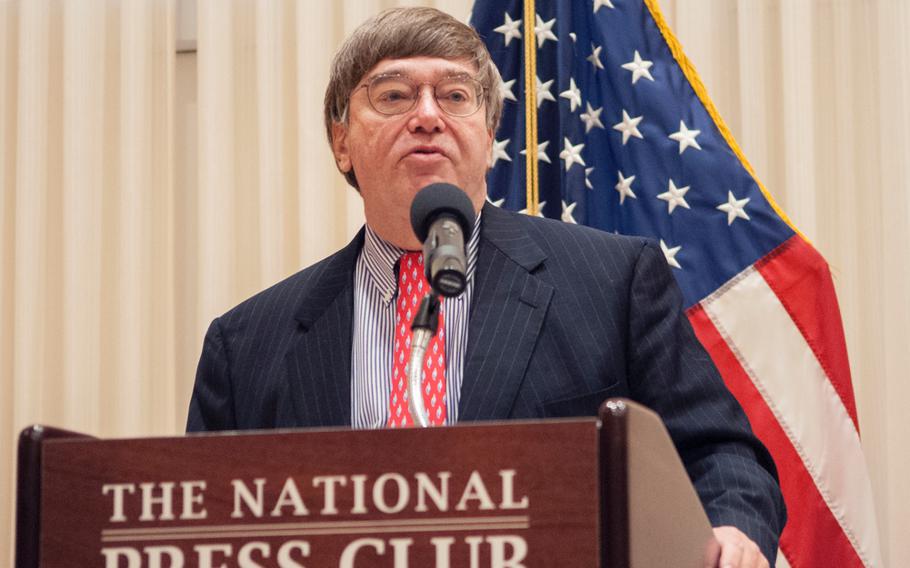 Charlie Cook speaks at the IAVA survey press conference on July 24, 2014, at the National Press Club in Washington, D.C. (Meredith Tibbetts/Stars and Stripes)

WASHINGTON — Nearly half of all respondents to a major survey of Iraq and Afghanistan veterans know at least one veteran from those conflicts who has tried to kill himself.

The survey, released Thursday, was conducted earlier this year by the Iraq and Afghanistan Veterans of America. IAVA received responses to an extensive list of questions from more than 2,000 of the nation’s younger veterans, the vast majority of whom served in the Army or Marine Corps.

Respondents ranked suicide and mental health as the biggest issue facing post-9/11 veterans. Among some of the more troubling findings:

However, when it comes to actually getting in to see a VA mental health care provider, respondents reported major problems. More than two-thirds of those who used the VA’s mental health care system had difficulty scheduling an appointment, compared with just 31 percent of non-VA provider users who faced similar challenges.

“It’s not just about having great care. It’s about having access. You’ve got to get your foot in the door before you can actually get that care,” said Jackie Maffucci, IAVA’s research director, when the results of the survey were released.

IAVA suggestions for dealing with the crisis include:

Encourage the VA to hire more mental health care professionals to meet the growing demand. Give veterans 15 years to enroll in the VA health care system instead of five, because veterans might delay due to stigma or a delayed onset of symptoms. Offer VA mental health care to former servicemembers who were dishonorably discharged, because they may have been discharged because of disciplinary problems stemming from an undiagnosed mental illness. Improve the monitoring and evaluation systems for the government’s mental health programs. Improve training among VA health care staff to help them better recognize and treat mental health problems.IAVA emphasized the importance of loved ones encouraging those with mental health problems to get care. According to IAVA, 77 percent of survey respondents who had someone close to them recommend they get help, ultimately sought treatment because of that advice.

“That’s a powerful message to family members, friends, peers who are out there, to just coax them,” Maffucci said. “When we encourage our loved ones to seek help, that’s what’s going to make the difference.”

The survey was conducted prior to the ongoing scandal that has engulfed the VA following revelations of mismanagement and malfeasance at VA hospital centers. Some experts worry that the bad press that the VA has gotten recently will discourage veterans from seeking mental health care, and possibly lead to an increase in suicide.

“Certainly there is a huge concern that a lot of the talk is going to turn [them] off — particularly those individuals whose only option is the VA — to not seeking care,” Maffucci said.

“So that suggests that it’s a real problem if we make the VA a less attractive care option, and so we sort of do so at our peril,” according to Phil Carter, the director of the Military, Veterans and Society Program at the Center for a New American Security, who participated in a panel discussion about the survey’s findings.

The ongoing political and media firestorm surrounding the VA may also hinder the department’s efforts to recruit more mental health care providers, according to experts.

“Right now particularly, it’s challenging,” Maffucci said. “VA is not probably a place where people are looking at right now saying, ‘Hey, I want to go there. They look like they’ve got their stuff together.’ ”