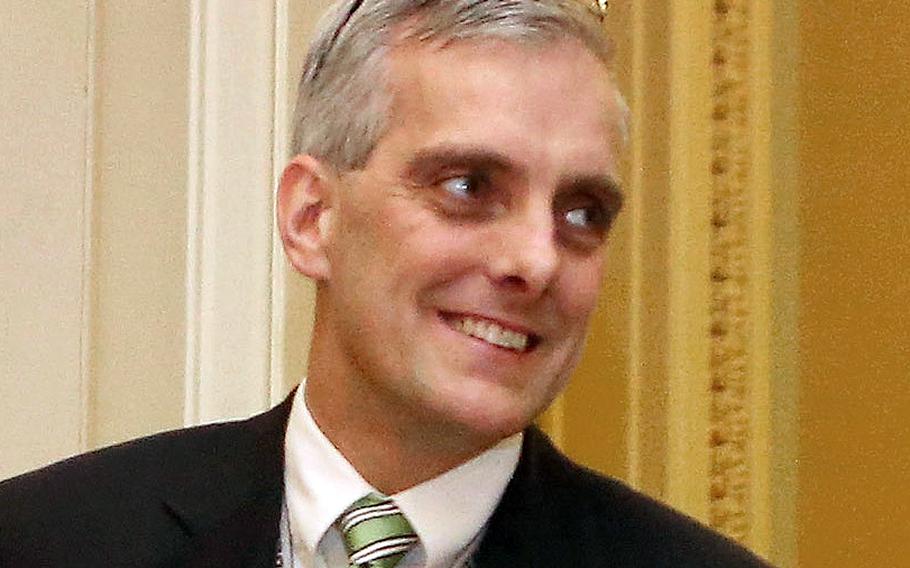 White House Chief of Staff Denis McDonough, at a meeting with members of the Senate Democratic Caucus at the U.S. Capitol in March, 2013. (Pool photo by Chip Somodevilla/Getty Images )

WASHINGTON — The choice of Denis McDonough by President-elect Joe Biden to lead the Department of Veterans Affairs surprised some veterans advocates because they said he is not a veteran or medical expert and lacks the experience of running a large bureaucracy.

McDonough, 51, had not been mentioned by many as a candidate for the job leading up to Biden’s announcement Thursday that the former President Barack Obama aide was his pick. His selection was such a surprise that multiple veteran groups said they had news releases ready showing support for other candidates such as former Army undersecretary Patrick Murphy and former VA Secretary Bob McDonald.

“Like everyone, I was surprised and caught off guard,” said Jeremy Butler, chief executive of Iraq and Afghanistan Veterans of America, an advocacy group. “Ultimately after talking with him...my takeaway is while he doesn’t meet all the criteria...he does bring some incredible talent and expertise and the respect and trust and the ear of President-elect Biden and that shouldn’t be overshadowed in any sense.”

Other advocates said they were hoping Biden would select a veteran to run the second-largest federal agency and the largest health care network in the country with more than 9 million patients.

“Maybe a post-9/11 veteran. Maybe a woman veteran. Or maybe a veteran who knows the VA exceptionally well,” said Joe Chenelly, national director of AMVETS, another advocacy group. “We are looking forward to hearing from President-elect Biden on his thinking behind this nomination.”

McDonough served as Obama’s chief of staff from 2013 to 2017 and deputy national security adviser from 2010 to 2013. During that time, he made a solid impression on Biden, according to Biden’s transition team. That relationship with the White House could be the key to moving some key veteran issues forward, Butler said.

McDonough’s managerial skills and knowing the ins and outs of government are the reason that he was selected, Biden said.

"McDonough is a largely unknown quantity for the veteran community because he lacks veteran status and does not have a significant track record in veterans affairs," Common Defense, a liberal-leaning veteran and foreign policy advocacy group, said in a statement. "However we hope that his selection signals that President-elect Joe Biden plans to leverage McDonough’s experience as the former White House chief of staff...to work extensively with Congress to pass transformative legislation to help us meet our needs."

McDonough would come to VA at a critical time for the agency. The department’s budget has consistently increased during almost 20 years, reaching more than $200 billion in 2020 from $41 billion in 2001.

The department is increasingly looking to the private medical sector to take a larger chunk of the burden of veterans health care. However, VA is still picking up the tab. Biden has said he doesn’t support “total privatization,” but understands the need to expand care options to veterans, especially in rural areas.

Toxic exposure could be a major issue for the VA in the coming years and there are multiple bills on Capitol Hill aiming to expand health care and compensation. Some lawmakers have recently expressed impatience over VA’s inaction, denying the majority of claims from young veterans who say they are getting cancers and other illnesses after living in contaminated environments for months or even years.

Some lawmakers said they see McDonough as an opportunity to rebuild a relationship between the VA and Congress.

"I am confident that he understands the importance of health care and veterans policy, values the voices of [veterans groups], and unlike the current secretary, will actively work with Congress to support our veterans -- especially through the [coronavirus] pandemic," said Rep. Mark Takano, D-Calif., the chairman of the House Committee on Veterans’ Affairs.

The Biden’s VA secretary announcement also comes the same week as a scathing Fort Hood report showing systemic issues of failed leadership at the Texas base that contributed to a pattern of violence, including sexual harassment, assault and death.

One of the biggest challenges for the VA is making the agency a safe and welcoming place for women. Women are the fastest-growing demographic in the military, with the number using VA health care almost tripling since 2000, from 160,000 to 475,000, according to VA data. Veterans’ advocates have criticized the department for being slow to adapt to treating more women.

“It's alarming that when given an incredible opportunity to move our community forward 50 years, the Biden team didn't choose someone the veteran community saw themselves in or can trust to know our struggles,” said Pam Campos-Palma, a senior strategist and advocate for liberal-leaning Vets for the People, an advocacy group.