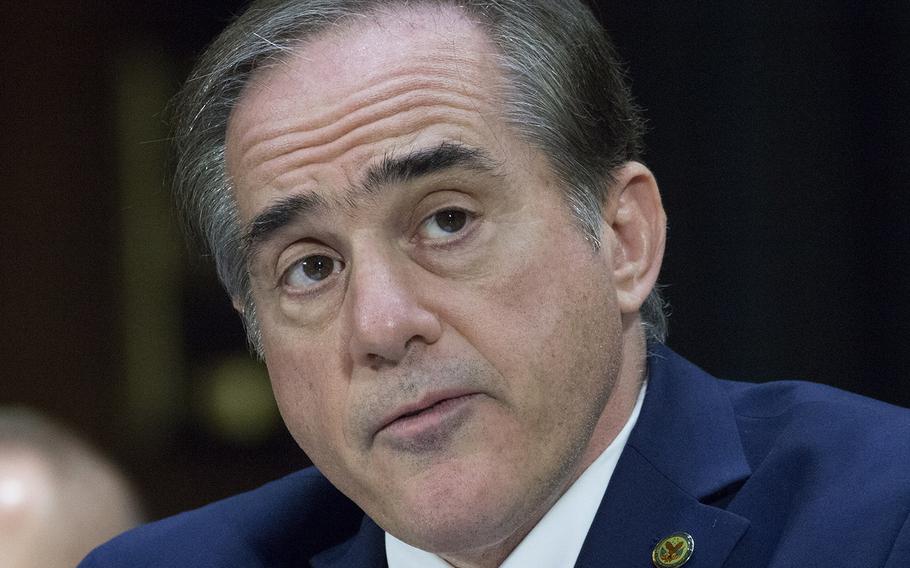 Secretary of Veterans Affairs Dr. David Shulkin, at a Senate hearing in February, 2017. (Stars and Stripes)

Speaking to hundreds of people at the Disabled American Veterans annual conference in Arlington, Va., Shulkin laid out his top 10 priorities for the Department of Veterans Affairs. It was his first public address since becoming VA secretary.

High on Shulkin’s list was redesigning the Veterans Choice Program into what he called “Choice 2.0.”

His plan would include removing the rule that allows veterans to go outside the VA for health care if they had to wait more than 30 days for an appointment or live more than 40 miles driving distance from a VA facility. Some veterans and lawmakers have criticized the 40-mile, 30-day rule for limiting veterans’ health care choices, and Shulkin called the program “extremely complex and bureaucratic.”

President Donald Trump said during his campaign that he would ensure every veteran could choose between the VA or private-sector care. Shulkin said Sunday that he wanted a system with less “red tape.”

“We want to be thoughtful about how we propose what the new choice program will look like, and do that in conjunction with Congress, and to make sure we are fulfilling the president’s promise and commitment that he has made to the country’s veterans,” Shulkin told Stars and Stripes.

Before he can propose Choice 2.0, Congress first must eliminate the expiration date for the original Veterans Choice Program, Shulkin said.

“We want to make sure we continue the current program so veterans don’t experience any gap in care,” he said.

The program was created as a temporary measure in 2014 after it was discovered veterans were suffering long waits for health care at some VA facilities. It was funded with $10 billion and given an expiration date of Aug. 7, 2017.

Sen. John McCain, R-Ariz., and Rep. Phil Roe, R-Tenn., introduced legislation last month to do away with the expiration date. The lawmakers estimated by August, the choice program would still have approximately $1 billion in funding.

Congress has yet to taken action on either the House or Senate bill.

“If Congress doesn’t act, we will see a significant amount of resources be removed,” Shulkin said.

Shulkin on Sunday also listed employee accountability as a top priority. He said he would work to push legislation in Congress that would allow the VA to “make sure bad employees are leaving the system.”

Some lawmakers have pushed to make it easier to fire VA employees as a way to root out a perceived culture of corruption in the department.

The VA will also announce some “bold proposals” regarding suicide prevention in coming weeks, Shulkin said.

Trump commented during his campaign on the number of veteran suicides – calling it a “national tragedy” – and said he would improve mental health care at the VA. According to the latest VA statistics, an average of 20 veterans died from suicide each day in 2014.

“Now I’m focused on the future,” Shulkin told Stars and Stripes. “I’m focused on how we can make significant advancements from where we were to make this a better system.”

Disabled American Veterans and other veterans organizations will have opportunities soon to highlight their own priorities for VA reform to the Senate and House veterans' affairs committees.

Disabled American Veterans will present their priorities to lawmakers on Tuesday, followed by The American Legion and Veterans of Foreign Wars on Wednesday.