Shinseki returns to VFW convention, having had some successes 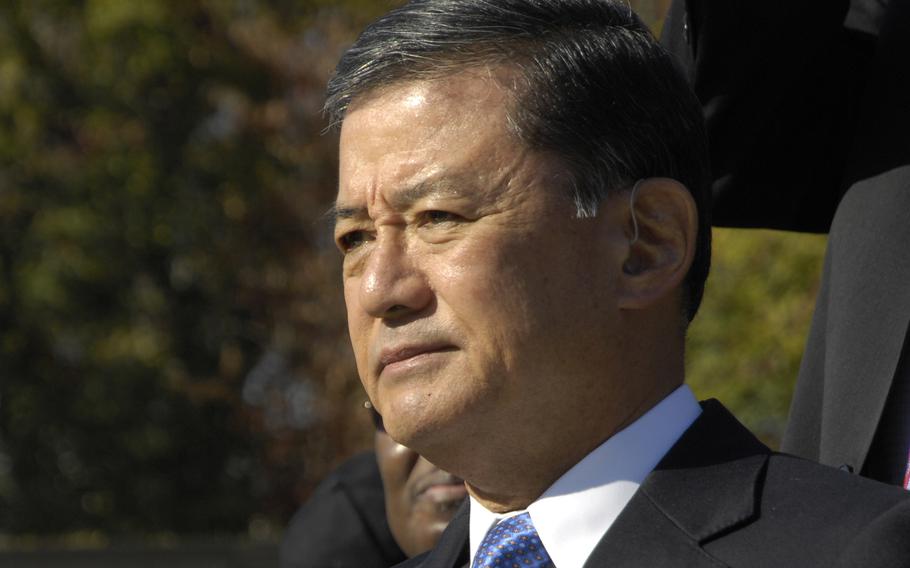 WASHINGTON — When Veterans Affairs Secretary Eric Shinseki spoke before the Veterans of Foreign Wars annual convention last summer, he closed his remarks with a series of one-year promises and the statement “I intend to be here to update you again next summer.”

It was a surprising announcement, since many veterans insiders has assumed the secretary would step down after the November 2012 elections. Last month, he became the longest serving VA secretary in American history, and on Tuesday he returns to the VFW conference again to follow up on those promises.

On the last two, the department can claim significant strides. The number of homeless veterans has dropped by about 20 percent since 2009, with about 60,000 still on the streets at the end of 2012.

The department is also spending about $500 million on telehealth services to expand outreach efforts for hard-to-reach veterans, and hired 1,600 new mental health personnel in the last year to create more access and appointments.

Shinseki also told VFW members that “our Veterans Benefit Management System will be fully operational at most regional offices, and just 40 percent of claims will be older than 125 days.”

The new VBMS technology -- touted as a key step in ending the backlog -- has been fielded in all but a few locations, but the backlog problem ballooned for most of the last year before dropping in recent months.

Today, about 67 percent of the pending veterans benefits claims are older than 125 days, which is how the department defines “backlogged.” That’s the same percentage as last summer, although the total number is down almost 65,000 cases from last summer, thanks to a drop in the total inventory.

Shinseki also promised the department would be on track for impressive increases in funding for various department programs, not all of which have come true.

The department’s fiscal 2014 budget request, if approved, would mean a five-year increase in spinal cord injury funding of 32 percent, long-term care program funding of 47 percent, and Iraq/Afghanistan veteran initiatives funding of 176 percent. All of those are close to what the VA secretary promised last year.

Traumatic brain injury funding would increase by 21 percent over five years, impressive but below the 51 percent Shinseki promised. Same with prosthetics research, which is on pace for a 51-percent increase that’s below the 75 percent five-year boost Shinseki boasted.

Both departments insist they have made dramatic strides on that effort in recent months, and are poised to share all basic medical information electronically by the end of this year. But lawmakers have voiced concerns over military plans to to adopt the VA’s behind-the-scenes software systems, saying it could undermine the effort in the long-term.

This year, the longtime VA secretary will the featured guest, and is expected again to focus on the ambitious deadlines he has set out for the agency.