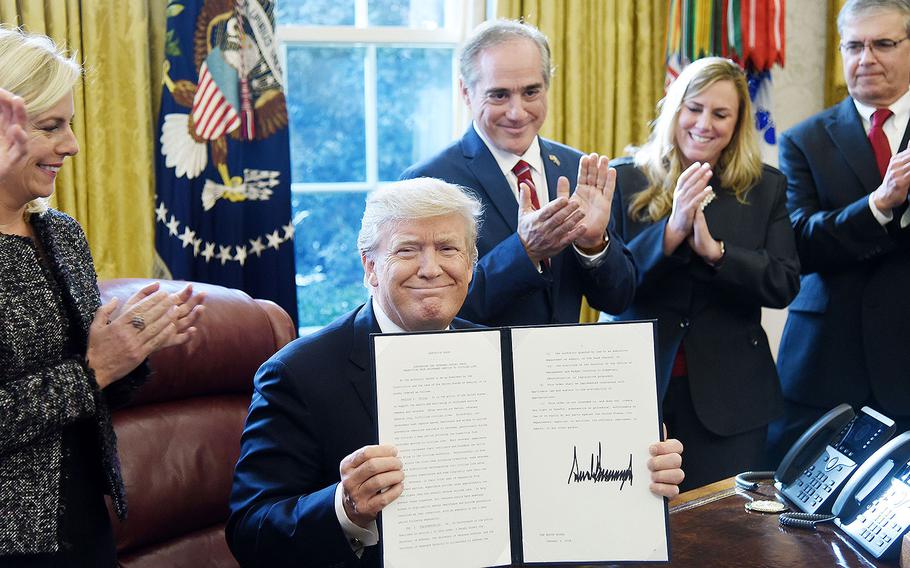 President Donald Trump holds a signed Executive Order on "Supporting our Veterans during their Transition from Uniformed Service to Civilian Life" on Tuesday, January 9, 2018 in the Oval Office of the White House in Washington, D.C. (Olivier Douliery/Abaca Press/TNS)

WASHINGTON — Thirty senators criticized the Department of Veterans Affairs on Friday for failing to implement promises made nearly three years ago through an executive order that President Donald Trump signed to combat veteran suicide.

Trump signed the order, titled “Supporting Our Veterans During Their Transition from Uniformed Service to Civilian Life,” on Jan. 9, 2018. At the time, White House officials said the order would allow exiting troops to be enrolled automatically in the VA for mental health care for one year after their transition. Veterans who use VA services are less likely to succumb to suicide than other veterans, VA data shows.

The promise never came to fruition, according to the senators, all Democrats. In a letter to VA Secretary Robert Wilkie last week, they criticized the department for failing to implement the order and for the lack of progress during the past few years to decrease veteran suicides. Sen. Jon Tester, D-Mont., the ranking Democrat on the Senate Veterans’ Affairs Committee, led the letter.

“The Trump administration made significant promises to improve the transition experience and connect servicemembers to mental health resources,” the senators wrote. “However, almost three years after the [order] was signed, VA has not made meaningful progress towards improving mental health care access and preventing veteran suicide, or even completing the tasks assigned in the [order] by the president.”

The VA says this is false. The order tasked the VA and other agencies with creating a Joint Action Plan. That plan was accepted by the White House in May 2018, and 15 of the 16 tasks outlined in the executive order have been completed, VA Press Secretary Christina Noel said.

Providing transitioning service members automatically with one year of VA mental health care – though touted as a major purpose of the order when it was signed – is not mentioned in the plan.

Instead, the order inspired the VA “Solid Start” program, in which trained callers provide information to transitioning service members about their access to peer support, availability of mental health care after separation and eligibility for VA health care and benefits. As of last month, the program had reached about 56% of newly separated veterans, Noel said.

Staff of the Senate Veterans’ Affairs Committee inquired in June about the status of one part of the Joint Action Plan, which said the VA and Defense Department would develop a method for service members to register for VA health care online during their transition out of the military. According to the senators, the task had not been completed and no progress had been made since January of this year.

Tester and the other senators said this amounted to a “broken promise” and called on Wilkie to implement the order in full.

“Hopefully the issuance of [the executive order] was more than a hollow press opportunity by the administration, and we can expect it to do right by our nation’s military and veterans,” Tester said.

VA Press Secretary Christina Noel argued the task had been completed. She pointed to a VA statistic from earlier this year that showed 85% of transitioning service members who went through the Transition Assistance Program said they had been informed about accessing mental health services and support systems in civilian communities. Of about 38,000 transitioning service members who separated in the second quarter of 2020, 37% enrolled in VA health care before leaving the military, Noel said.

According to the latest VA data, about 20 veterans and members of the National Guard and the Reserve die by suicide every day.

The department’s annual report about veteran suicides typically is released in September, but the VA hasn’t published its 2020 report yet. The data is on a two-year lag, so the report would show veteran suicide statistics for 2018 and would not include suicides that occurred during the coronavirus pandemic.

Rep. Mark Takano, D-Calif., sent a letter to Wilkie last week, urging him to release the 2020 report or to meet with his staff by Nov. 1 to go over the latest data.

“I am dismayed to see not only a delay in VA’s release of its annual report, but also a reluctance to specify the reason for the delay and a date certain for publication,” Takano wrote.