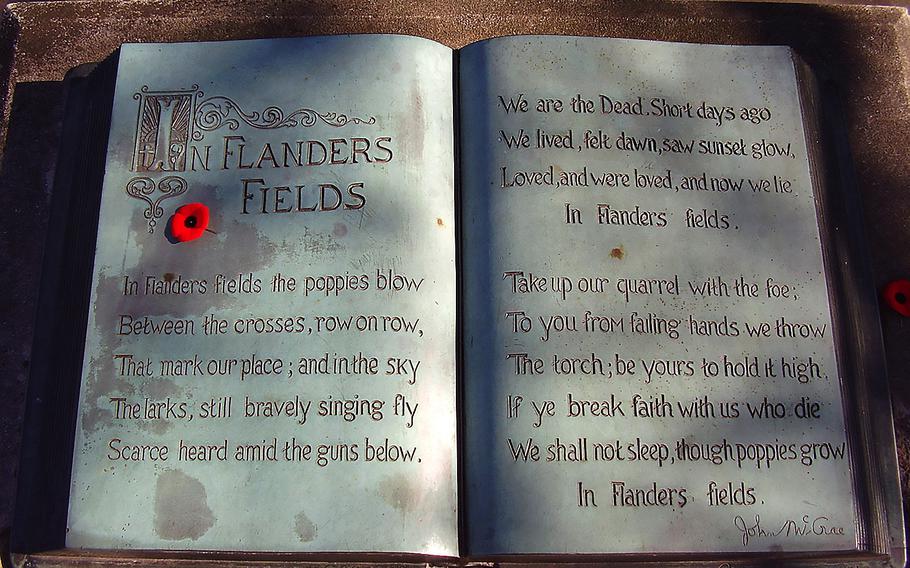 Inscription of the complete poem in a bronze "book" at the John McCrae memorial at his birthplace in Guelph, Ontario, Canada. (Creative Commons/WikiMedia Commons)

Inscription of the complete poem in a bronze "book" at the John McCrae memorial at his birthplace in Guelph, Ontario, Canada. (Creative Commons/WikiMedia Commons) 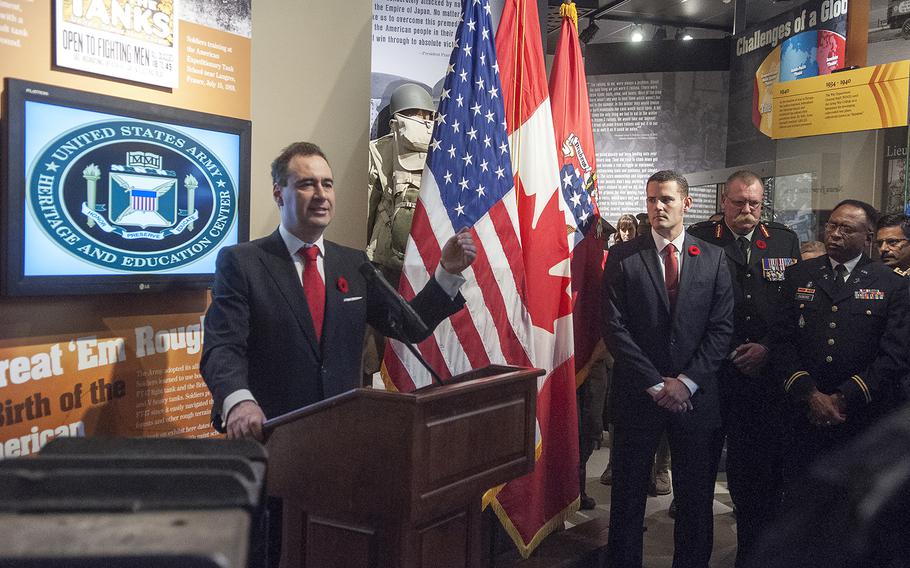 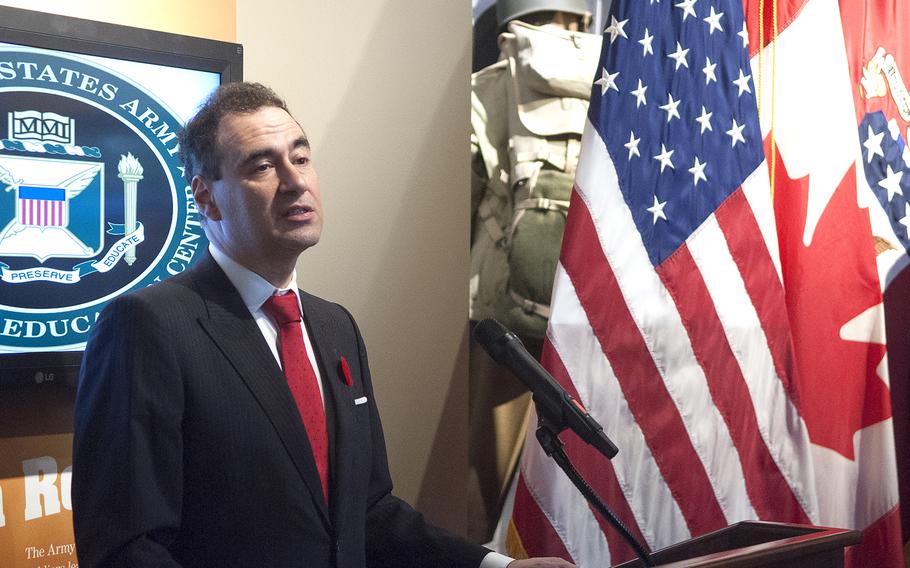 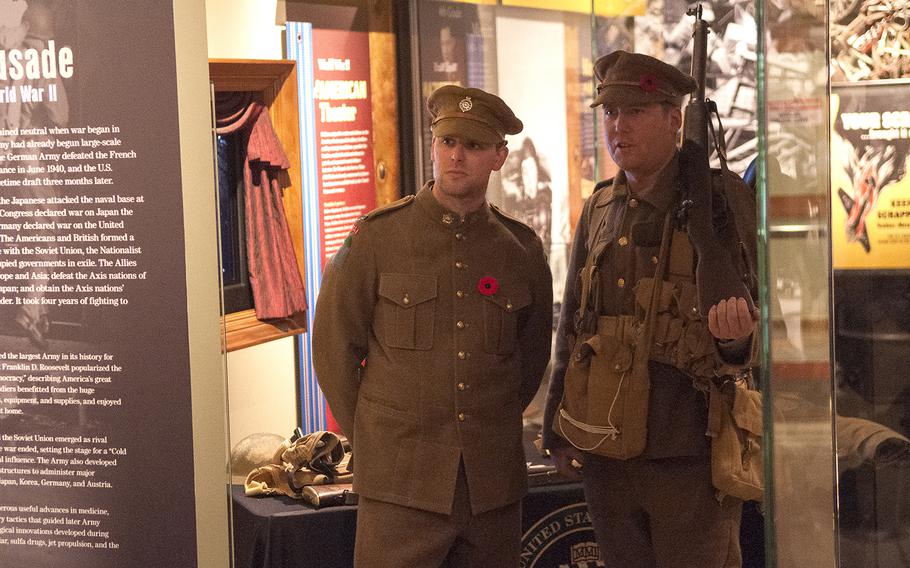 Re-enactors Rob Giunta of Redding, Pa., left, and Alex Leggatt of London, Ontario, Canada, stand their posts at a gallery within the war museum at the Army Heritage and Education Center in Carlisle, Pa., on Tuesday, Nov. 10, 2015. World War I re-enactors -- representing U.S., Canadian and French forces-- were part of a tribute to Veterans Day that centered on the reading of the iconic WWI poem "In Flanders Field." Giunta and Leggatt were representing Canadian troops who served in the Princess Patricia's Canadian Light Infantry Regiment. (Carlos Bongioanni/Stars and Stripes) 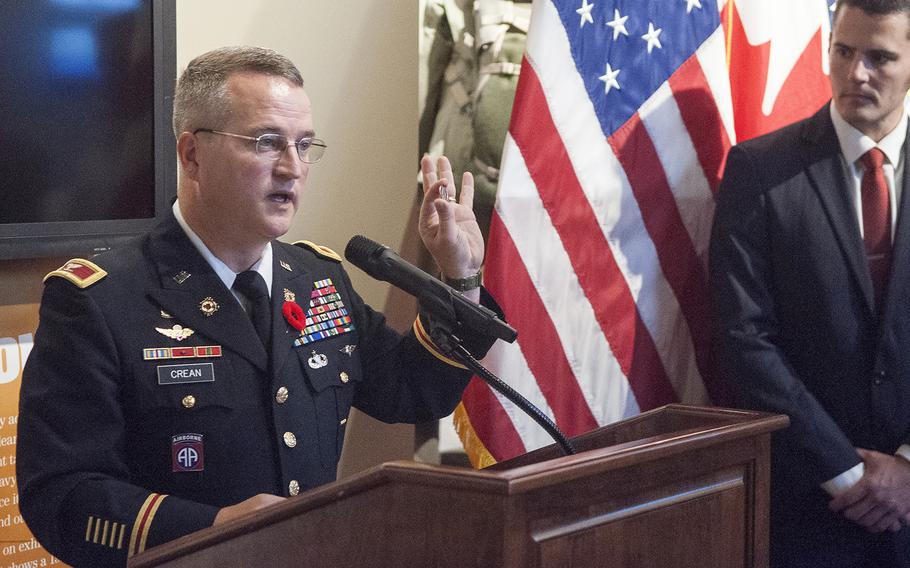 Col. Peter Crean, the director of the Army Heritage and Education Center in Carlisle, Pa., hold sup a Canadian coin with a poppy etched on it to demonstrate the symbolic importance of poppies which are a significant theme in the iconic World War I poem, "In Flanders Field," which was read Tuesday, Nov. 10, 2015, at the Carlisle center to honor servicemembers on the eve of Veterans Day. (Carlos Bongioanni/Stars and Stripes) 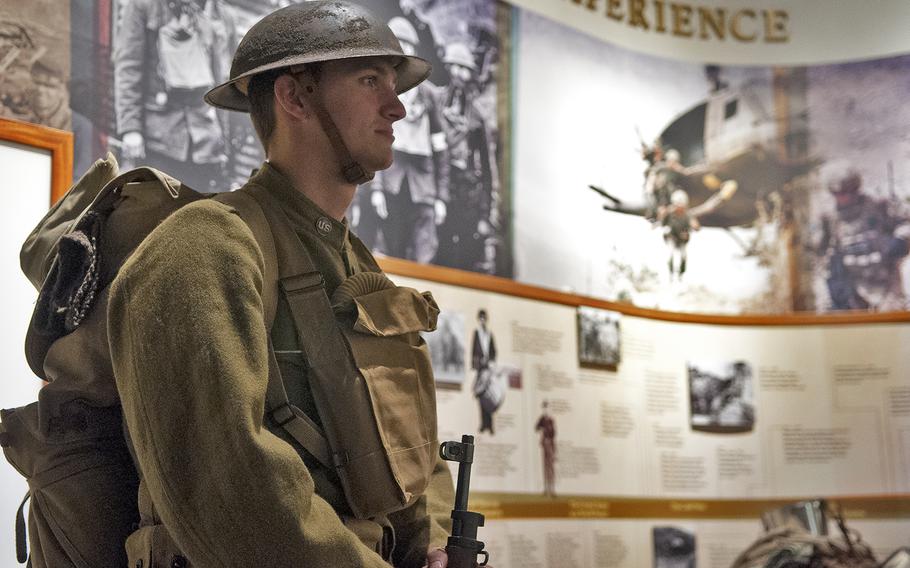 Tristan Holley of East Hanover, Pa., stands his post at a gallery within the war museum at the Army Heritage and Education Center in Carlisle, Pa., on Tuesday, Nov. 10, 2015. World War I re-enactors -- representing U.S., Canadian and French forces-- were part of a tribute to Veterans Day that centered on the reading of the iconic WWI poem "In Flanders Field." Holley was part of a group representing the 79th Infantry Division's 304th Engineer Combat Battalion. (Carlos Bongioanni/Stars and Stripes) 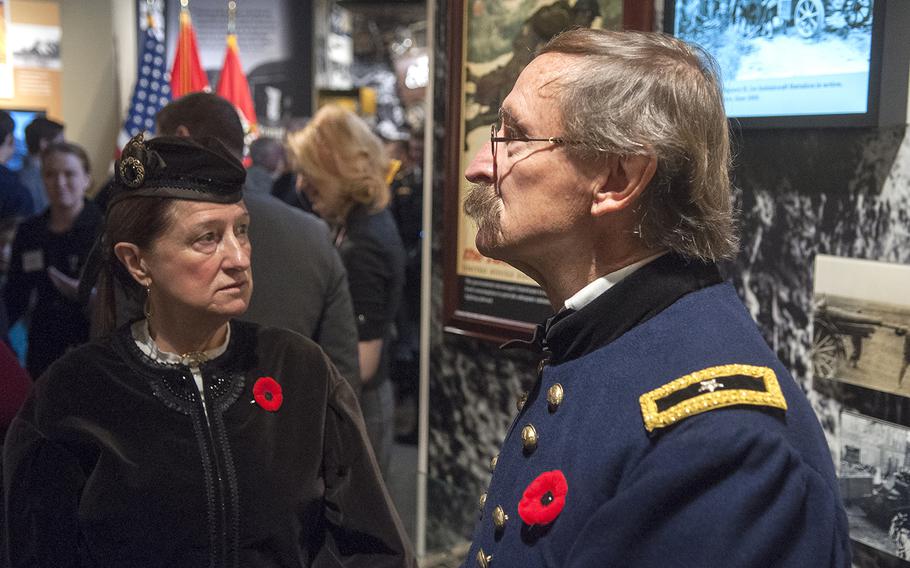 Mike Smith and his wife Diane, dressed in the Civil War-era outfits of Mr. and Mrs. John Buford, the Union general who fought at the Battle of Gettysburg, attend a Veterans Day event on Tuesday, Nov. 10, 2015, at the Army Heritage and Education Center in Carlisle, Pa., where the iconic World War I poem, "In Flanders Field," was read. (Carlos Bongioanni/Stars and Stripes) 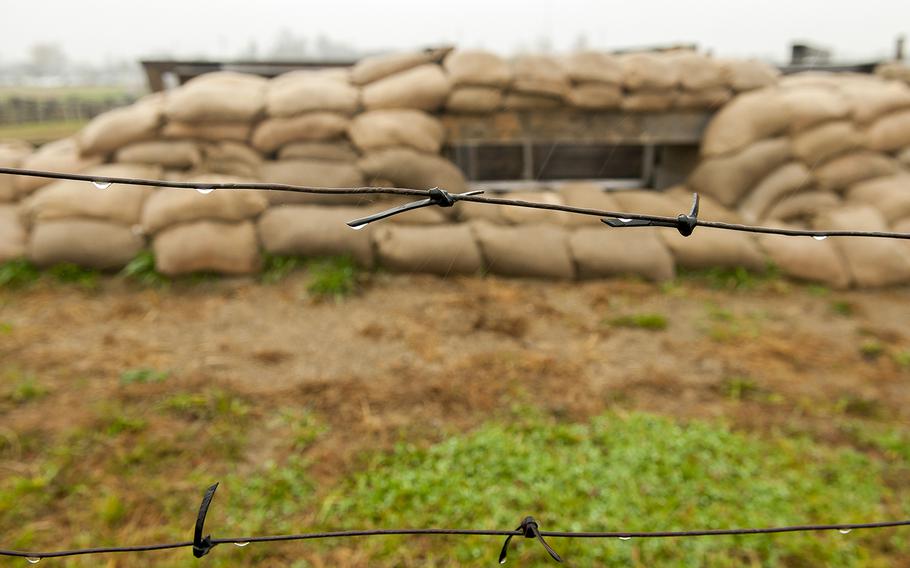 A replica World War I Allied trench system, part of the outdoor war musem at the Army Heritage and Education Center in Carlisle, Pa., lies under drizzly gray clouds on Tuesday, Nov. 10, 2015. A Veterans Day commemoration featuring the reading of the iconic WWI poem, "In Flanders Field," was planned to take place in the trenches, but was moved into the center's indoor war museum because of the rain. The barbed wire fence in front of the structure is made of rubber so children visiting the site can run over the fields without getting hurt to make charges against an enemy encampment. (Carlos Bongioanni/Stars and Stripes)

CARLISLE, Pa. – One stanza in French, and two in English.

That’s how John Prato, the consul general of Canada, read “In Flanders Fields” during a Veterans Day commemoration that centered on the 100-year anniversary of the iconic World War I poem.

Several dozen attendees, including U.S. and Canadian dignitaries, listened to the reading Tuesday at the Army Heritage and Education Center, adjacent to Carlisle Barracks where the U.S. Army War College is located. The reading followed several brief historical sketches of the poem’s author and of the horrific events he witnessed during WWI.

Lt. Col. John McCrae, a Canadian Army surgeon, wrote the poem in 1915 after allied forces suffered devastating losses from chlorine-gas attacks and after a friend, Lt. Alexis Helmer, was killed on May 2 by an artillery shell.

According to U.S. Army Col. Peter Crean, director of the education center, bits and pieces of Helmer’s body were collected in sandbags and buried in a nearby field that served as a makeshift cemetery. Red poppies often were the only vegetation that grew up in the barren battlefields rendered toxic by all the incoming munitions. The war scene depicted in the poem is from the fallen soldiers' point of view.

The poem, written three years before Germany signed an armistice with the western allies on Nov. 11, 1918, now serves as an enduring tribute to those who served in combat and those who gave their lives in what was supposed to be the “war to end all wars.” First known as Armistice Day, and now as Veterans Day in the United States and Remembrance Day in Canada, Australia and the United Kingdom, the holiday now pays tribute to veterans of all wars and is often memorialized by the wearing of poppies, a prominent theme in the 15-line poem, referenced in the first and last lines.

The days leading up to Helmer’s death were particularly gruesome, said Crean, who recounted how allied troops were exposed to their first chemical attack on April 22, during the start of the Second Battle of Ypres in Belgium. It was a clear evening, and British forces on a nearby hill watched perplexed as a “strange, green-gray cloud” drifted toward an Allied position manned by Algerian/French territorial and colonial troops.

No one could see what was going on as approximately 168 tons of chlorine gas blew over.

In roughly 10 minutes, some 6,000 Allied troops had died, leaving a mile-long opening in the defensive lines. A Canadian division, in which McCrae and Helmer served, was called in to fill the gap. Two days later, another chemical cloud was unleashed by the Germans. The Canadian troops were told to breathe through urine-soaked clothes, held to their faces, to counteract the effects of chlorine gas. They were the only ones able to stand that day, said Crean.

Diane Smith of Gettysburg, Pa., knew some basic facts about “In Flanders Fields,” before Tuesday’s event, but her appreciation of the poem was greatly enhanced after hearing the background of the poem.

“When you think about the number of men that were killed, it’s just mind-boggling,” she said.

Smith and her husband, Mike, were dressed in the Civil War-era garb of Mrs. and Mr. John Buford, the Union brigadier general who served during the Battle of Gettysburg. As a hobby, the two often go to historical war venues to present living histories of the Bufords and their times.

“We talk about Gettysburg’s 50,000 casualties in three days as being horrendous… and 6,000, you know, killed. But when you talk about 10-, 15,000 killed in a matter of minutes, those are astronomical figures,” said Mike Smith, a Coast Guard veteran.

Tuesday’s reading originally was to take place in the trenches outside the education center along the Army Heritage Trail, which showcases a number of sites that highlight nearly every era of U.S. Army history. Three groups of WWI re-enactors, representing U.S., Canadian and French forces, were to take up various positions along a replica WWI Allied trench system located at the head of the trail opposite a replica of a WWI German “pillbox.”

A drizzling rain, however, forced event organizers to move the program to the education center’s indoor museum with the re-enactors posted at three different gallery sections within the museum.

Re-enactor Rob Giunta thought it would have been better having the event in the cooler outdoors rather than sweating inside dressed in a very warm and itchy wool uniform of the era. Though he is American, Giunta, from Redding, Pa., joined a Canadian re-enactors group that represents WWI units that served in the Princess Patricia’s Canadian Light Infantry Regiment. Because the regiment joined the British in the war effort in 1914, re-enactors can portray “early- or late-war efforts,” Giunta said, whereas re-enactors for American forces are relegated to late-war events. The United States didn’t enter the war until 1917.

For Consul General Prato, Tuesday’s reading with U.S. and Canadian officials in attendance was an appropriate tribute for Veterans Day. Prato pointed to the long history of strong bonds and shared values between the two neighboring countries. He mentioned the 40,000 Americans who went to Canadian recruiting stations set up in the United States and signed up early in the war to serve in Canadian units.

Prato also stressed the incredible sacrifices the countries made in the war effort. For Canada whose population at the time was no more than 7½ million, the casualty rates were staggering. Of the 620,000 men and women who went off to war overseas, roughly 60,000 died in the conflict, with another 150,000 wounded.

“The truth is,” Prato said, “we can never repay those debts that we owe to those men and women who paid for our freedom with their lives, but it is imperative that we remember and honor their enormous sacrifice. So on this special day, on the eve of Nov. 11th, let us pay our heartfelt tribute to all members of the armed forces both past and present.”

Prato’s words echoed the sentiments of the poem’s closing lines:

If ye break faith with us who die We shall not sleep, though poppies grow In Flanders fields.