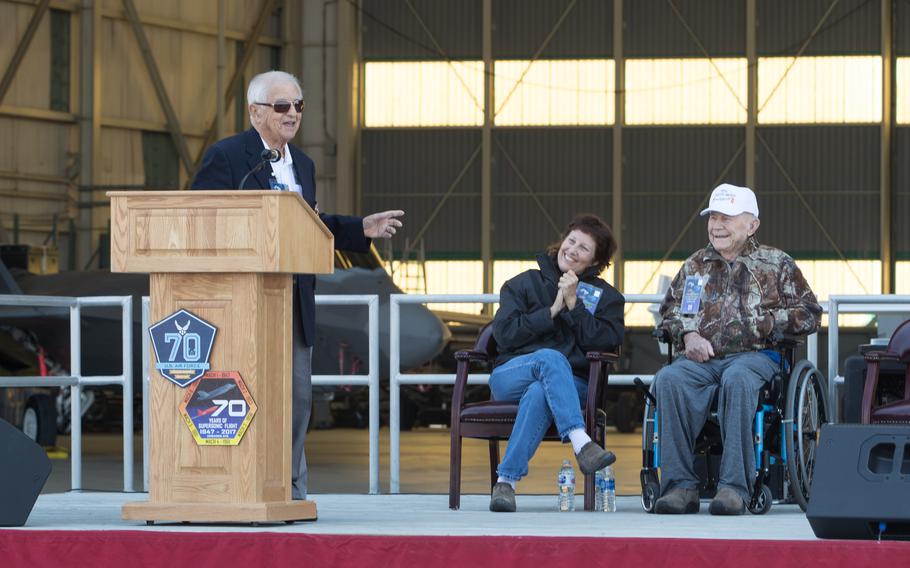 Retired Brig. Gen. Robert Cardenas speaks at the opening ceremony of the 70th Anniversary of Supersonic Flight on October 13, 2017. Behind him is retired Brig. Gen. Chuck Yeager and wife Victoria. Cardenas piloted the B-29 launch aircraft that released the X-1 experimental rocket plane in which Yeager, a captain at the time, became the first man to fly faster than the speed of sound. (Donald Allen/U.S. Air Force)

He was also a family man. He and Gladys, his wife of 74 years, had seven children and 19 grandchildren. The couple have been living in Del Cerro. 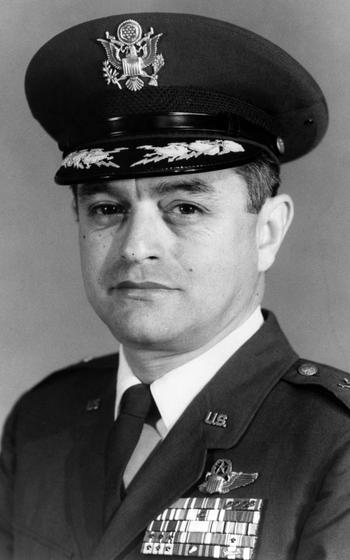 Despite a truly remarkable military career that earned him a long list of medals and honors, Cardenas is known almost universally for being mostly quiet about his achievements.

"He was proud to be an American and it was an important to him to come through for the country when he was given the opportunity," his son, Mike, said Sunday. "But he just did his job. He wouldn't tell you about all the things he accomplished unless you asked."

Cardenas was command pilot of the aircraft that famously launched Chuck Yeager's Bell X-1 into supersonic flight in 1947, but most of the glory went to Yeager. Cardenas doesn't appear in either the movie or the book "The Right Stuff," which dramatized Yeager's flight.

When asked about his relative historical obscurity in 2012, Cardenas told the Union-Tribune it didn't bother him at all.

"As a matter of fact, I don't particularly give a damn."

Sells said establishing the 313-acre cemetery with 162,000 gravesites required the difficult tasks of assembling land, sometimes with donations, and working with environmental groups.

His son said the accomplishment was so important to his dad that he will be buried at Miramar instead of Arlington National Cemetery in Virginia.

Details on services haven't been finalized, but they will take place the last week of March at Miramar and include a formation flyover, his son said. Cardenas' military career included serving as a combat leader of World War II bombing missions in the European theater, a test pilot in multiple aircraft, an aerospace pioneer and a jet fighter squadron commander in Vietnam.

In 2008, he was inducted into the International Air & Space Hall of Fame.

" General Cardenas embodied the spirt of aviation and space exploration," said Jim Kidrick of the San Diego Air & Space Museum in a statement. "The museum mourns his loss while remembering him fondly for his incredible achievements and contributions to aviation."

Cardenas was born in 1920 on Mexico's Yucatan Peninsula, but he moved to San Diego at age 5 and was drawn to the gliders launching off the Torrey Pines cliffs when he was a youngster.

He helped pilots launch and recover gliders as a teen, and his son said those experiences set him on the path he would take into aviation.

He left San Diego State in 1939 to join the California National Guard. In 1940, he was designated an aviation cadet, and was then commissioned as a second lieutenant in the U.S. Army Air Corp in July 1941 at the beginning of World War II.

In the war, he flew B-24s as part of the 44th Bomb Group known as the Flying Eightballs. On his 20th mission over an air armaments factory in Germany he was shot down and wounded when shrapnel pierced his helmet.

He had to swim across a lake and was saved from drowning by a fisherman who brought him to neutral Switzerland, where he was detained until he escaped with the help of the French Resistance who arranged his return to England in 1944.

Cardenas became a test pilot after World War II and later served in the Vietnam conflict as commander of the 18th Tactical Fighter Wing. He was promoted to brigadier general in 1968 and given command of the Air Force Special Operations Force in Florida.

After retiring in 1973, Cardenas worked in the private sector for Science Applications Inc. He later was appointed to public sector panels focused on economic growth in the southwest border area, juvenile justice and veterans' affairs.

Speaking engagements and occasional public appearances were also a priority during Cardenas' later years, said his son, who brought his dad to many of these events during the last 20 years.

Cardenas also spent a lot of quality time with his children and grandchildren, his son said, including taking some grandchildren for doughnuts but keeping it a secret from their more health-conscious grandmother.

"The old adage about God, country and family is where his values were," his son said.

He also taught some of his children to play golf. Cardenas was a longtime Chargers fan who was mildly frustrated he never saw the team win a Super Bowl, his son said.

A statue of Cardenas wearing a flight helmet stands on a pedestal in front of the Veterans Museum at Balboa Park.