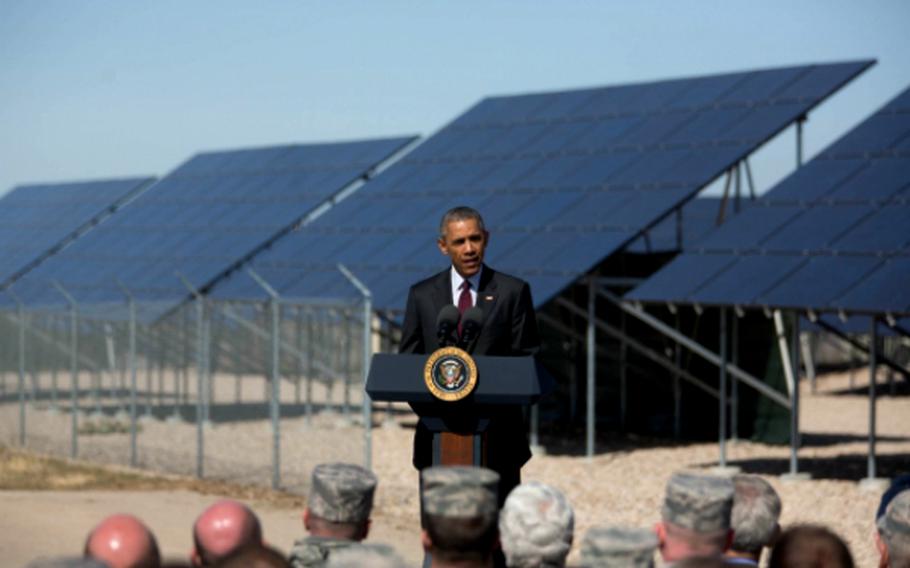 WASHINGTON — Will solar be a hot new job market for veterans?

The Obama administration unveiled a program Friday that will train transitioning troops at 10 military bases across the country how to build and maintain solar energy farms, and prep them to become one of 75,000 employees it hopes to add to the solar workforce by 2020.

The future of solar energy seemed uncertain a generation ago when the Carter administration set lofty goals that fizzled. But the technology is becoming cheaper and more efficient, and the Defense Department — one of the world’s top energy users — has been adding solar facilities to bases in the United States and abroad at a rapid clip in recent years.

“We can’t maintain the best military the world has ever known unless we have an economy that is humming,” President Barack Obama said during a trip to Hill Air Force Base in Utah.

Obama said the initiative will help set up vets in an industry that is adding jobs 10 times faster than other areas of the economy.

“We want to ensure that after they’ve fought for our freedom [troops] have jobs to come home to,” he said.

The Solar Ready Vets program will teach veterans how to install panels, connect produced electricity to the grid and comply with building codes. Likely jobs will be system inspectors, sales reps and installers, according to the administration.

A pilot version of the program at three bases has already graduated students, said Elizabeth Sherwood-Randall, deputy secretary of the Department of Energy, which is heading up the initiative.

At Camp Pendleton in California, 20 troops graduated in February and all received job offers in the industry, Sherwood-Randall said. The DOE has struck an agreement with the country’s top-five solar energy companies to interview all graduates.

The 4- to 6-week intensive training course will now be available at Hill and three facilities that hosted the pilot — Pendleton, Fort Carson in Colorado and Naval Station Norfolk in Virginia, she said.

It was not decided Friday which other six military facilities might participate, and how many of the 75,000 projected trainees will be veterans, said Dan Utech, deputy special assistant to the president for energy and climate change.

Bases will be chosen to participate based on training opportunities at surrounding community colleges, the strength of the local solar market and interest among troops.

As for the cost, Utech said the Department of Veterans Affairs is still ironing out agreements with states to allow the use of GI Bill benefits to fund the education.

“Those are not currently approved, but we are working to get them approved,” Utech said.

But the administration has designed the training to be free of charge for troops.

The White House’s push to rein in global climate change is driving the Solar Ready Vets program, which it hopes will further reduce carbon emissions from fossil fuels. Hill Air Force Base was considered a logical backdrop for the rollout after it unveiled in 2009 what was the largest solar panel farm in Utah.

The military has sought out new and renewable energy sources due in large part to cost — the DOD used $16 billion in liquid fuel in 2012 — and security. For example, Marine Corps Camp H.M. Smith in Hawaii unveiled a demonstration project last summer aimed at producing part of the base’s energy from the sun to keep missions running in the face of natural disasters, cyberattacks or sabotage.

The White House said Fort Detrick in Maryland broke ground this week on a solar project that will power almost 2,500 homes annually. Bases in North Carolina, Georgia, Hawaii and Arizona have also either completed or started similar solar projects.

Energy use is also a major risk downrange where needed convoys of fossils fuels are targeted by enemy snipers and roadside bombs.