The first day of school at DODDS around the Pacific 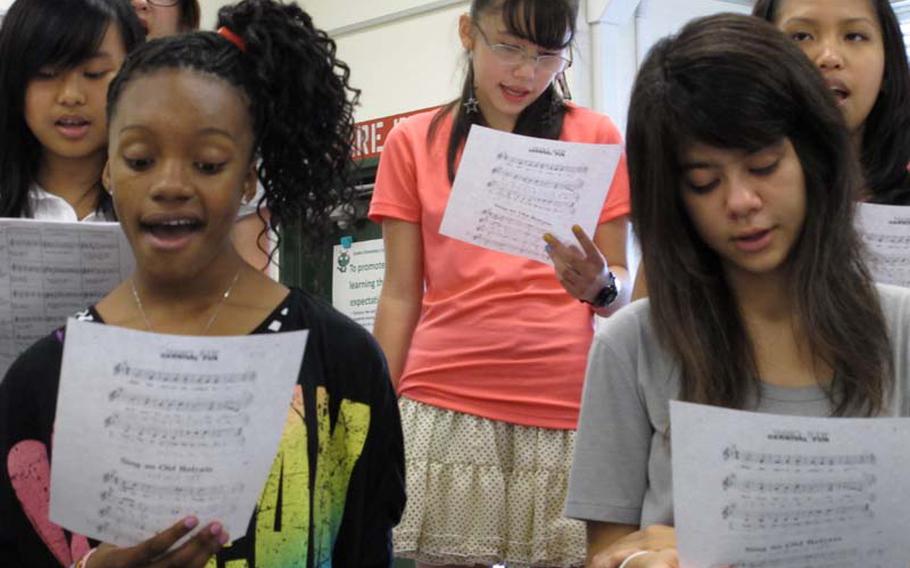 Students in Mrs. DeEtte Hassen's chorus class for 7th- and 8th-graders and high schoolers sing Aug. 27, 2012, at the E.J. King High/Sasebo Elementary complex at Sasebo Naval Base in southwestern Japan. Teachers in Sasebo wasted little time in getting back to the books on the first day. School bells rang for the first time this year across the Pacific, except in Okinawa where Typhoon Bolaven led to cancellations on the first day. (Matthew M. Burke/ Stars and Stripes )

Teachers and students from Misawa, Japan, to Seoul rang in the new school year on Monday, although the bells were silent at some of the region&rsquo;s largest schools.

But, students on Okinawa got an extended summer break thanks to Typhoon Bolaven, which swept over the island over the weekend. With the storm passing through, students at those schools should join their Department of Defense Education Activity counterparts on Tuesday.

"The summer months zipped by quickly as we tended to building maintenance, teacher hiring, ordering of books and supplies, academic scheduling and other necessary tasks to ensure classrooms were ready for our students on day one. All that hard work paid off," said Charly Hoff, DODEA-Pacific spokesman. "We are off to a great start already and with all the preparations and improvements we've made over the summer, we expect a terrific school year ahead."