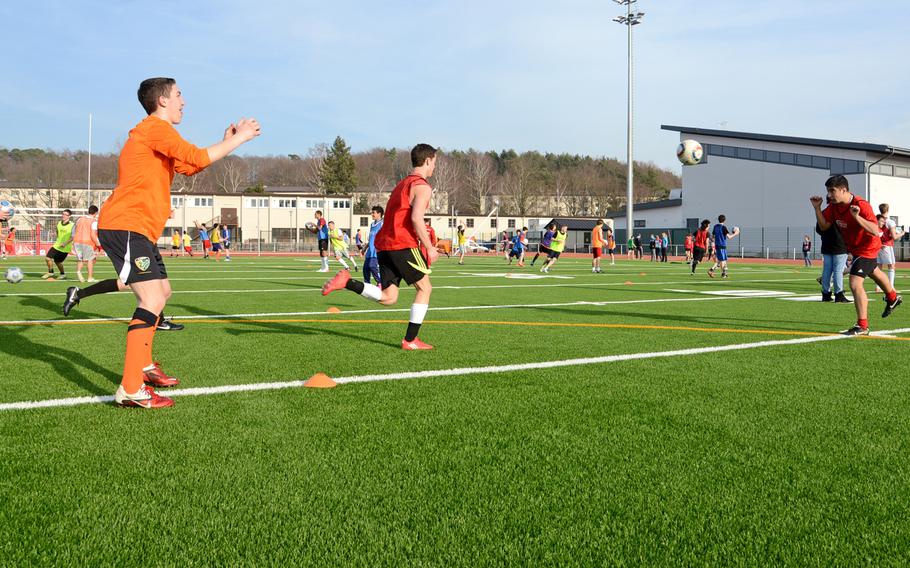 Kaiserslautern Raiders soccer players, foreground, and the track team, in the background practice on their new field as they prepare for the 2013 DODDS-Europe spring sports season. In the background at right is the newly constructed multipurpose room. (Michael Abrams/Stars and Stripes)

Federal budget woes have thrown hundreds of millions of dollars in desperately needed school upgrades into limbo this year as the Department of Defense Education Activity tries to push ahead with its unprecedented overhaul of aging facilities by 2018.

DODEA had planned to hit the halfway point this year — funding for replacement or renovation of 49 of 104 schools that are in poor or failing physical condition. But the lack of a federal budget and forced defense cuts are holding up money for 11 school projects in Japan, Germany, South Korea, the United Kingdom and Kentucky.

In 2010, the agency requested $3.7 billion over five years to overhaul or repair facilities after releasing a survey showing that 78 percent of its schools, many built in the Cold War era, have aged beyond repair.

Dozens of schools are now in the process of being upgraded through funding from past years, but Congress failed to approve a budget for the 2013 fiscal year, knocking federal agencies back to last year’s funding levels under continuing resolution legislation. Meanwhile, Congress imposed automatic budget cuts on the Department of Defense and federal government forcing agencies to scrape for savings and weigh employee furloughs.

The 11 school replacement and renovation projects planned for this year – worth $547 million — “are being held up by the application of sequestration requirements to the Fiscal Year 2013 continuing resolution budget,” DODEA spokeswoman Elaine Kanellis wrote in an email to Stars and Stripes.

Five of the schools affected by the 2013 process to be replaced are in Japan, at Okinawa, Sasebo and Camp Zama. There are also two in Germany at Ramstein Air Base and Wiesbaden, two in the UK at Menwith Hill and Lakenheath, one in South Korea at Osan Air Force Base, and one at Fort Campbell, Ky., according to a status report provided by DODEA.

School officials say all the schools are safe for students despite their age and inability to meet the agency’s own building standards.

Meanwhile, DODEA has also decided to extend its master funding schedule for the massive upgrade effort past 2015 as originally planned and into the 2016 fiscal year, meaning it will need an extra year to request the money it needs from Congress to fix all 104 schools, according to Mike Smiley, DODEA chief of facilities. Kanellis said the decision was made prior to the recent budget wrangling in Congress and not related to sequestration.

Despite the delays, Smiley said work is set to pick up, and the replacement or renovation of all deteriorating military schools in the United States and abroad will still be completed by 2018 as planned.

“We are going to see within the next year a dramatic increase in the number of schools being constructed,” Smiley said.

Only nine school projects have so far been completed but 17 are now either being bid out to contractors or are already under construction, meaning they will be completed within about two years or less, according to DODEA.

There was a recent slowdown in the pace of the schools effort because the agency had to adopt new building standards, Smiley said. Now, that the speed bump is behind DODEA, he said construction can accelerate.

But the majority of work is still ahead for the agency. It still must convince Congress to spend hundreds of millions of dollars in upcoming budgets to upgrade 66 more schools.

The DOD recently released its proposed budget for next year and DODEA is requesting $798 million for 17 new school projects while this year’s roster waits in uncertainty.

The agency has said repeatedly most of the funding will be requested at the tail end of the effort and it is confident Congress will provide all the money needed to complete the global upgrade by 2018.

Even with the federal budget challenges this year, Smiley said that overall the project has “definitely been going as planned.”