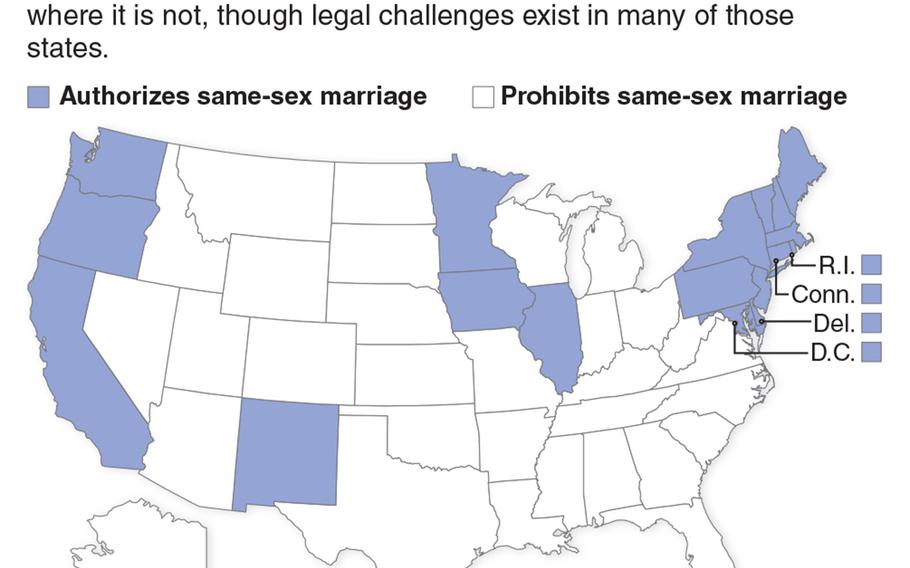 WASHINGTON — Advocacy groups filed a lawsuit here this week challenging the Department of Veterans Affairs on its new policy denying benefits to same-sex spouses who live in states that do not recognize gay marriage.

The VA policy issued in June “writes inequality right back” into the law after a landmark ruling last year that struck down sections of the Defense of Marriage Act and forced the federal government to recognize same-sex couples for a variety of benefits, attorneys for the American Military Partner Association argued in a complaint filed Monday in the U.S. Court of Appeals for the Federal Circuit in Washington.

The department issued its new policy in June after it completed a review of the DOMA decision ordered by the Obama administration. It requires that veterans and their same-sex partners lived in a state that permitted gay marriage at the time of their union or lived in one of those states during the time they earned VA benefits, which include disability pay, home loan guarantees, death pensions and burial rights.

“No member of our community should be left behind just because their home state continues to discriminate against their marriage,” according to a released statement by Susan Sommer, director of constitutional litigation at Lambda Legal, a nonprofit advocate for the civil rights of lesbians, gay men, bisexuals and transgender people that helped file the lawsuit.

In its argument before the circuit court, the AMPA says the ruling last year on DOMA found that it is unconstitutional to keep federal benefits from legally married same-sex couples.

“The court’s opinion specifically singled out … among DOMA’s unconstitutional effects the deprivation of veterans’ benefits to same-sex spouses, including denying these veterans and their spouses the dignity and final respect of the right to burial together in veterans’ cemeteries,” according to the legal complaint.

The VA is withholding benefits from some couples who lived or served in states that do not recognize the unions, despite controversy and legal challenges over those laws.

There are active legal challenges against same-sex marriage bans in 13 states, the National Conference of State Legislatures reported. Meanwhile, the rest of the country is split with 19 states and the District of Columbia recognizing the marriages and 31 states and two U.S. territories that bar them.

On Wednesday, the U.S. Supreme Court agreed to delay an appeals court decision allowing gay marriage in Virginia, again throwing the law in that state into doubt. The state was set to begin recognizing unions performed in Virginia as well as other states on Thursday before the Supreme Court put on the brakes without providing an explanation for the move, according to media reports.

In recent years, barriers to gay equality have fallen in quick succession — the military lifted its ban on openly gay troops in 2011, many states have legalized same-sex marriage, and the fall of DOMA led to an overhaul of policies at federal agencies.

The debate over veterans’ benefits such as disability payments, death pension benefits and burial rights is a new legal frontier for the civil rights movement.

“Having weathered the federal government’s past, longstanding discrimination against them, lesbian and gay veterans and their families find themselves once again deprived of equal rights and earned benefits by the government they served and the nation for which they sacrificed,” the legal complaint says.

When approached for this story, the VA said it does not comment on open lawsuits but did provide some details on its same-sex marriage benefits policy.

Veterans with gay spouses are required to meet the residency standards due to a section of federal law governing VA benefits that still exists despite the DOMA decision. The VA made its June policy decision based on the law.

Meanwhile, the department has begun processing all claims and applications involving same-sex marriages that were previously being held by program offices due to the review of the DOMA decision.