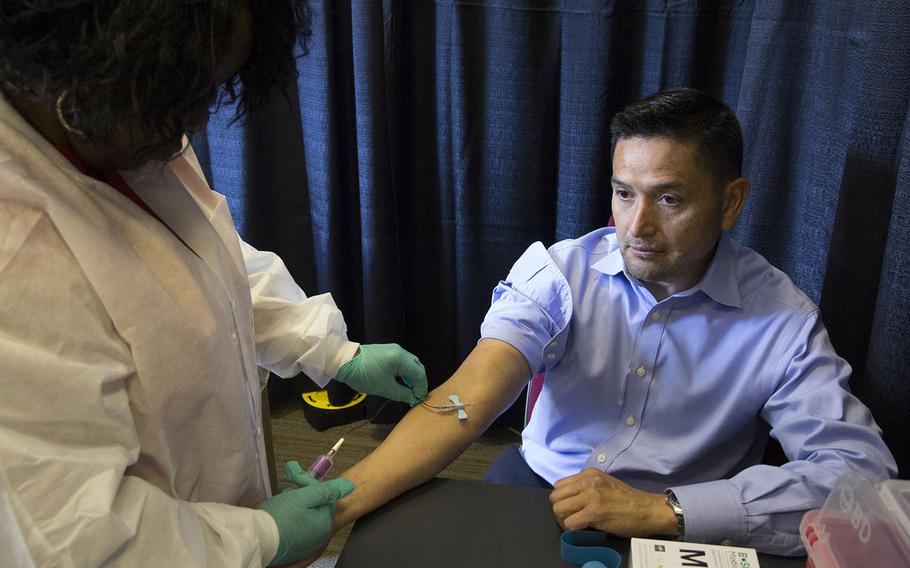 Gerardo Avila has blood drawn by Selma White of Hampton, Va., during registration for the Department of Veterans Affairs' Million Veteran Program at the American Legion headquarters in Washington, D.C., June 30, 2017. (Joe Gromelski/Stars and Stripes)

Gerardo Avila has blood drawn by Selma White of Hampton, Va., during registration for the Department of Veterans Affairs' Million Veteran Program at the American Legion headquarters in Washington, D.C., June 30, 2017. (Joe Gromelski/Stars and Stripes) 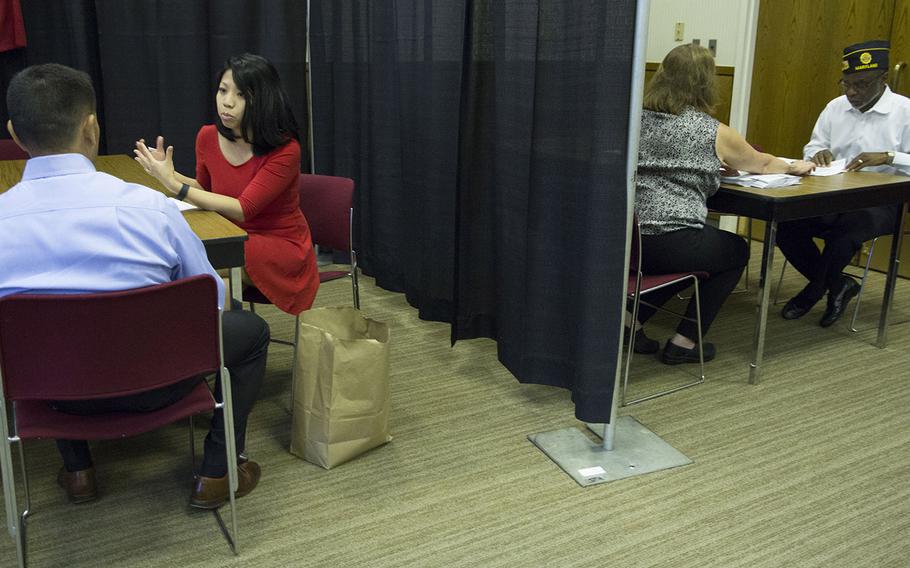 Jenny Hui Yan talks with veteran Gerardo Avila, at left, while Nancy Steward talks with Roscoe Butler during registration for the the Department of Veterans Affairs' Million Veteran Program at the American Legion headquarters in Washington, D.C., June 30, 2017. (Joe Gromelski/Stars and Stripes) 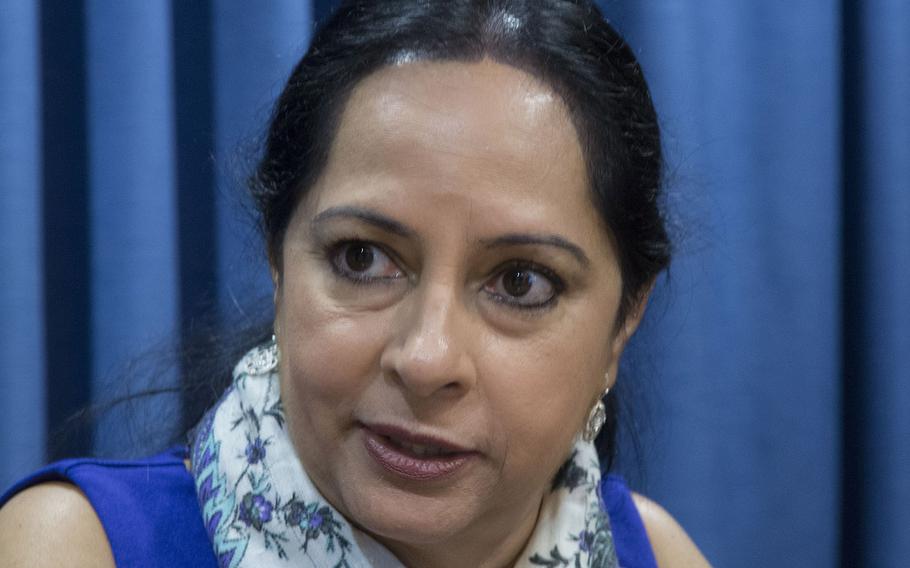 The Million Veteran Program was designated the largest genomic database in the world when it reached 500,000 participants last August. Project leaders plan to use the information to research conditions such as diabetes, cancer, Gulf War illness, heart disease, kidney disease, schizophrenia, bipolar disorder and post-traumatic stress disorder. But the project could face an uncertain future based on President Donald Trump’s proposed 2018 VA budget, veterans with the American Legion said.

The budget proposal specifically states that using the Million Veteran Program to advance precision medicine would be a “particular goal” in 2018. But the budget would cut the funding allotted to medical research.

The American Legion has testified to lawmakers about their concerns.

“We noticed that in the [fiscal] 2018 budget that $18 [million] had been stripped out from [the Information Technology] appropriation for all of VA research,” said Joe Plenzler, a spokesman for the American Legion. The total amount in that fund was $20 million, he said.

“We are very concerned about the long-term impacts on cutting-edge research projects like the Million Veteran Program. This research is important and will help develop precision therapies that will benefit veterans and the American people in every legislative district,” Plenzler said. “We’re heading in the wrong direction here. These cuts will limit the amount of research that can be done using the [Million Veteran Program] resource, and that’s a mistake.”

Gerardo Avila and Roscoe Butler, the last two veterans to voluntarily enroll at the Friday event, put the database over the 580,000 mark. VA staff asked them about their medical and military history and collected blood samples.

The Million Veteran Program began collecting data in 2011, and it has the goal of reaching 1 million participants by 2020 or 2021, said Sumitra Muralidhar, the program director.

“Our ultimate goal was really to be able to provide improved and personalized health care to veterans, and to the population at large eventually,” she said. “We’re changing the paradigm of medicine. Traditionally, a doctor checks your symptoms and makes a diagnosis based on that. The future is a holistic picture, looking at DNA, the molecular profile of a person and lifestyle.”

The program was developed with “meager resources,” Muralidhar said.

“We leveraged what we already had,” she said. “We’ve been very diligent with where we put those resources.”

The VA sent 4 million invitations to veterans in the mail in order to recruit participants. To participate, veterans can go to one of 65 VA medical centers across the country that are equipped to do enrollments. Veterans must be enrolled in VA health care to be eligible.

Muralidhar said she’s now working with the Defense Department in an attempt to open enrollment to current servicemembers. Enrolling people earlier could help researchers better track the effects of toxic exposure in the military and improve the likelihood the servicemembers would be helped by the research.

Most participants are from the Vietnam War era, in the age range of 60 to 65, Muralidhar said. Less than 2 percent are younger than 30.

“We have very few younger veterans,” she said. “We’re going to follow people who enroll throughout their lifetimes. So if they enroll early, there’s a better chance of applying what we learn from this program to them and help them. We can prevent illnesses.”

Some veterans have expressed privacy concerns with providing their information to the program. Muralidhar insisted the information is kept in a secure system that only a few VA employees are authorized to access.