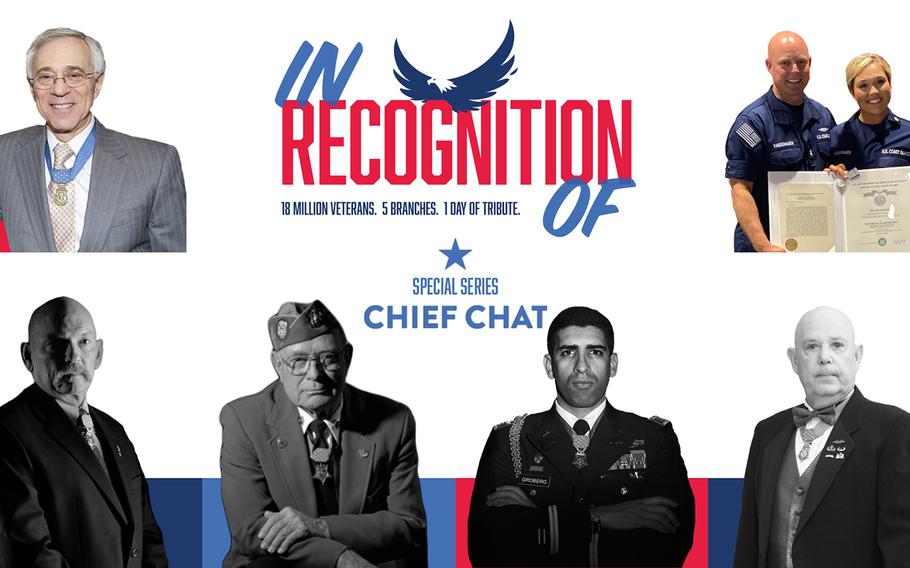 WASHINGTON — The Army & Air Force Exchange Service will host a handful of Medal of Honor recipients on its “Chief Chat” social media broadcasts this month to recognize valor for Veterans Day.

The Medal of Honor recipients from World War II, Vietnam and Afghanistan will join “Chief Chat” host Air Force Chief Master Sgt. Kevin “KO” Osby on the Facebook Live broadcasts throughout the month to share the stories of their battle experiences, the Exchange announced Wednesday. The episodes will come as the Army and Air Force, Navy, Marine Corps and Coast Guard exchanges team up with the Defense Commissary Agency for a series of Veterans Day-related events, including a Nov. 11 social media concert series.

Retired Army Col. Jack Jacobs will be the first Medal of Honor recipient to appear on the program at 1 p.m. EST on Thursday. Jacobs received the Medal of Honor in 1969 for actions during the prior year as a first lieutenant in the Mekong Delta region of Vietnam. His actions, including repeatedly braving Viet Cong automatic gunfire to evacuate his wounded commander and eventually driving off the attack, were credited with saving 14 lives. Jacobs, 75, served 21 years before retiring from the Army in 1987. He was awarded two Silver Stars and two Purple Hearts for actions in Vietnam, in addition to the nation’s highest military honor.

The other Medal of Honor recipients who will join “Chief Chat” are:

• Retired Army Capt. Florent Groberg on Nov. 12 at 11 a.m. EST. Groberg received the Medal of Honor in 2015 for his 2012 actions in Kunar province, Afghanistan, in which he was credited with tackling an insurgent wearing a suicide vest, saving several lives. The vest exploded as Groberg tackled the enemy fighter, leaving the former soldier with life-threatening injuries that hospitalized him for nearly three years.

• Retired Marine Corps Warrant Officer 4 Hershel “Woody” Williams, 11 a.m. EST on Nov. 19. At 97, Williams is the last surviving Medal of Honor recipient from World War II’s Battle of Iwo Jima in 1945. Williams received the Medal of Honor later that year for his actions during an hourslong battle on the tiny island, which saw him repeatedly brave enemy fire and use a flamethrower to destroy enemy positions.

• Retired Army Command Sgt. Maj. Gary Littrell and retired Army Sgt. Gary Beikirch at 11 a.m. EST on Nov. 24. Littrell and Beikirch received their Medals of Honor in the same 1973 ceremony for actions just days apart in the same area of central Vietnam in 1970. Littrell, an adviser to the U.S.-backed Vietnamese Army, was credited with leading a four-day effort to repel an enemy attack, directing artillery and air support, administering first aid and braving enemy fire to slow the advancing attack. Beikirch, a Green Beret medic, was credited with repeatedly risking his own life, even after he was seriously wounded in a mortar attack, to treat injured comrades under heavy fire.

The concert series on Veterans Day will be streamed on various exchange and commissary social media pages, according to the exchange. It will feature musical acts every hour from 4 p.m. through 11 p.m. EST. Artists will include Andy Grammer, Ashanti, Big Boi, Hanson, K Michelle, and Tank And The Bangas, the exchange said.