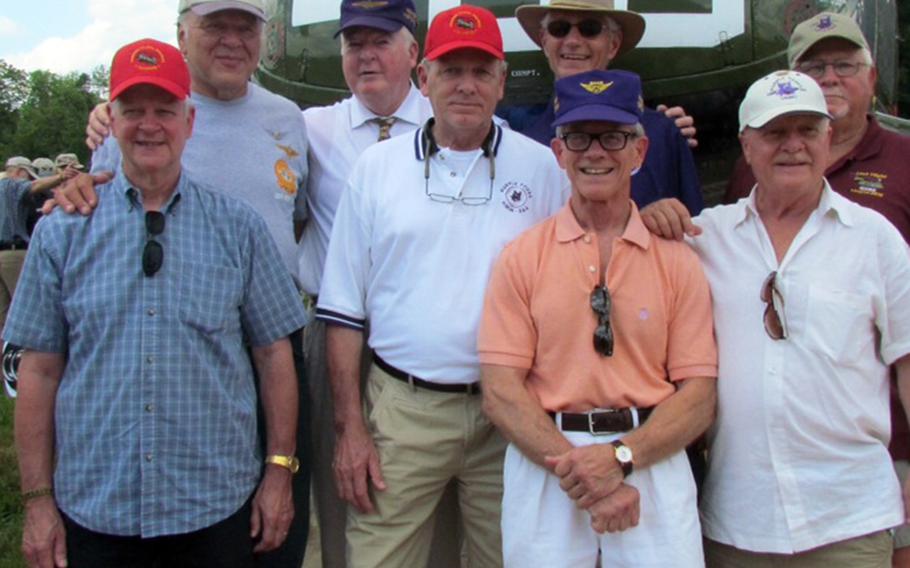 Kenneth Altazan, at center wearing red hat, and other veterans pose for a photo during a "retirement ceremony" for a CH-46 helicopter at the Smithsonian's National Air and Space Museum's Steven F. Udvar-Hazy Center in Virginia, Aug. 1, 2015. (Courtesy of George Gitcho)

Kenneth Altazan, at center wearing red hat, and other veterans pose for a photo during a "retirement ceremony" for a CH-46 helicopter at the Smithsonian's National Air and Space Museum's Steven F. Udvar-Hazy Center in Virginia, Aug. 1, 2015. (Courtesy of George Gitcho) First, an ancient tape surfaced, then a letter that had been locked away for 40 years. Finally the full picture of Marine Sgt. Kenneth Altazan's bravery on a harrowing day in Vietnam began to emerge.

But it would be six years before the retired farmer got the call from a major at the Pentagon.

“He said, ‘I assume you’ve gotten our letter by now,’” Altazan recalled in a phone interview with Stars and Stripes. “I said, ‘No sir, I haven’t got your letter.’ And he said, ‘Let me be the first one to congratulate you — your Silver Star has been upgraded to the Navy Cross.’”

Altazan, of Baton Rouge, La., was being recognized for pulling injured Marines off a battlefield in Quang Nam province under intense fire and bringing them to the CH-46 helicopter where he served as crew chief. The Navy Cross is the highest honor bestowed on Marines and seamen by the Navy, second only to the Medal of Honor. He received the award Tuesday.

On May 9, 1969, Altazan was serving with the Marine Medium Helicopter Squadron 364 “Purple Foxes” when they were dispatched to what they knew would be a hazardous mission: 10 wounded Marines spread over several rice paddies were under heavy fire and needed to be evacuated.

“With complete disregard for his own safety, Sergeant Altazan boldly leaped from his helicopter, ran to the side of the wounded man, lifted him to his shoulders, and fearlessly moved back across the fire-swept terrain toward his CH-46, all the while assisting another evacuee across the perilous open area,” according to Altazan’s original citation.

But the narrative in the original citation, remarkable as it was, understated Altazan’s actions. Altazan had actually left the helicopter multiple times despite the danger. At one point the wounded man he was carrying was shot, sending Altazan sprawling and severely injuring his knee. He not only got up and took the man to the chopper but continued to pick up the injured despite being in excruciating pain.

“I learned in boot camp to react — you don’t think, you react,” he said.

The full story came out after a chance meeting at a reunion of his Vietnam comrades brought one of Altazan’s friends in contact with the surveillance plane pilot who was monitoring the battle from 1,500 feet above. After being accused in an earlier friendly fire incident, the pilot had started recording the audio of all of his missions. He still had the tape of the battle and provided it to Altazan.

Then, the Navy corpsman aboard Altazan’s helicopter remembered a letter he had written his wife right after the battle detailing the entire mission, complete with maps. She had saved all of his war correspondence, and the corpsman got in touch with another old squad mate of Altazan’s.

Once the Pentagon had all of the new evidence, it took six years before they approved the upgrade.

Altazan was in the Marine Corps for four years before returning to Louisiana. He said he struggled with his experiences after returning from Vietnam, bouncing from job to job before finding his calling as a crawfish farmer. Now 69, Altazan has since retired. At a ceremony Tuesday in Baton Rouge, he was awarded the Navy Cross in front of his wife, children, grandchildren and more than 100 well-wishers, including some of his old squad mates.

“It was truly a humbling experience,” he said.