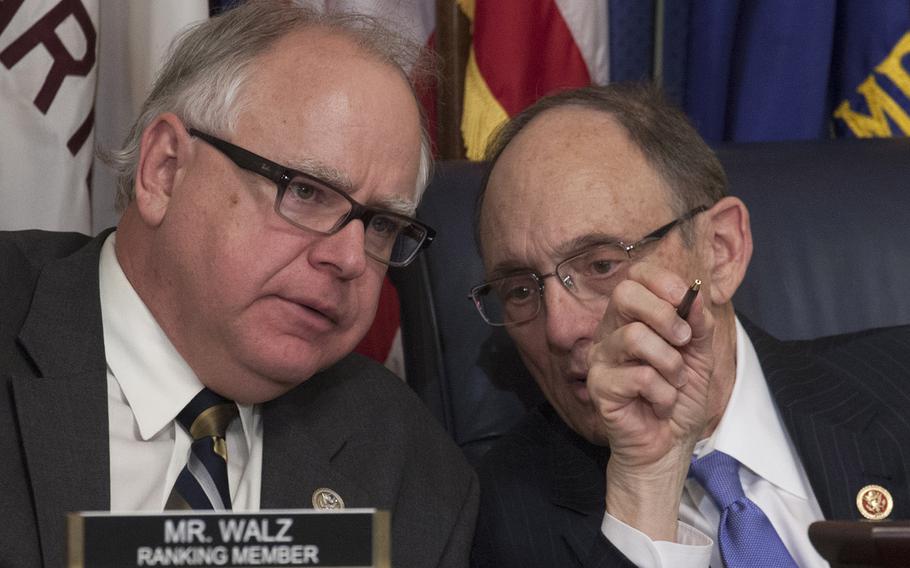 WASHINGTON — The House Committee on Veterans’ Affairs will hold a hearing Monday about a large expansion of veterans' education benefits with a plan to vote on the measure Wednesday and have the bill sail through the House in just two weeks, ahead of a monthlong summer recess.

The legislation was introduced Thursday, and in a show of goodwill uncommon in a divided Congress, Republicans and Democrats gathered to exchange compliments at the bill's release. It was a stark contrast to a few months ago, when controversy about how to pay for the estimated $3 billion expansion of the GI Bill led to the cancelation of a House hearing and caused some veterans advocates to believe the deal was dead.

“In any Congress, especially in recent Congresses, that’s usually a death knell,” said Rep. Tim Walz, D-Minn. “[Rep. Phil Roe] refused to accept that and came back to retool. Because of that, we’re going to enhance one of the best programs that has ever come out of this Congress. We continue to prove we can get things done that do matter.”

Walz, the ranking Democrat on the veterans’ affairs committee, and Roe, a Republican from Tennessee who is chairman of the committee, are co-sponsors of HR 3218, titled the Harry W. Colmery Veterans Educational Assistance Act of 2017. It’s named for a past commander of the American Legion who authored the original GI Bill of Rights in 1944.

The legislation combines 18 different bills and about 30 provisions and is supported by 40 military, veterans and higher education advocacy groups.

The committee will hold a hearing about the bill Monday at 7:30 p.m. EST and vote Wednesday at 10 a.m. GOP leadership wants to schedule a floor vote before August.

Walz said he and Roe were working with Sen. Johnny Isakson, R-Ga., and Sen. Jon Tester, D-Mont., the chairman and the ranking member on the Senate Veterans’ Affairs Committee, to achieve a similar time frame in the Senate.

In a statement Thursday, Isakson and Tester said they are drafting similar legislation.

The House bill boosts tuition and housing aid for National Guard and Reserve members, as well as veterans majoring in a science, technology, engineering or mathematics field. It extends the GI Bill to all Purple Heart recipients and fixes a Pentagon deployment authorization that has kept about 5,000 reservists and guardsmen from accumulating education benefits.

The package also addresses veterans’ losses when their schools close mid-semester. Last year, when for-profit ITT Technical Institute closed its doors, thousands of veterans who attended the campuses were unable to recover lost education benefits. The bill calls for the Department of Veterans Affairs to restore tuition costs and boost living stipends for veterans caught in those situations.

One of the biggest shifts would be to drop the 15-year time limit on veterans to tap into their education benefits after they leave military service. The change would apply only to servicemembers who enlist after the expanded GI Bill takes effect, which is expected to be Jan. 1, 2018.

“Because of the nature of the new warriors who are serving, the cap on the benefit is really holding people back,” Walz said. “Using these benefits whenever you want to use it is the reality of the new world, and that is a big deal.”

The legislation also includes a more symbolic change – to drop the “Post-9/11” from the name and use “GI Bill.” Advocates with Student Veterans of America, who led the effort to reignite momentum in Congress on the issue, said untying the GI Bill from one conflict could help protect it from future attempts to cut its funding. The group is calling the proposed expansion the “Forever” GI Bill.

After it caused dissension between veterans organizations in April, advocates dropped an idea to pay for the bill by deducting $100 per month for two years from new enlistees’ pay. Iraq and Afghanistan Veterans of America blasted the idea at the time as a “tax on troops.”

Now, lawmakers are instead proposing a decrease to veterans’ living stipends to fall in line with active-duty servicemembers’ basic housing allowance. The change would not apply to people currently using the GI Bill.

IAVA gave its support to the bill Thursday.

“The GI Bill is getting stronger today,” said IAVA Executive Director Allison Jaslow. “And we’re doing it without charging a fee to new troops.”