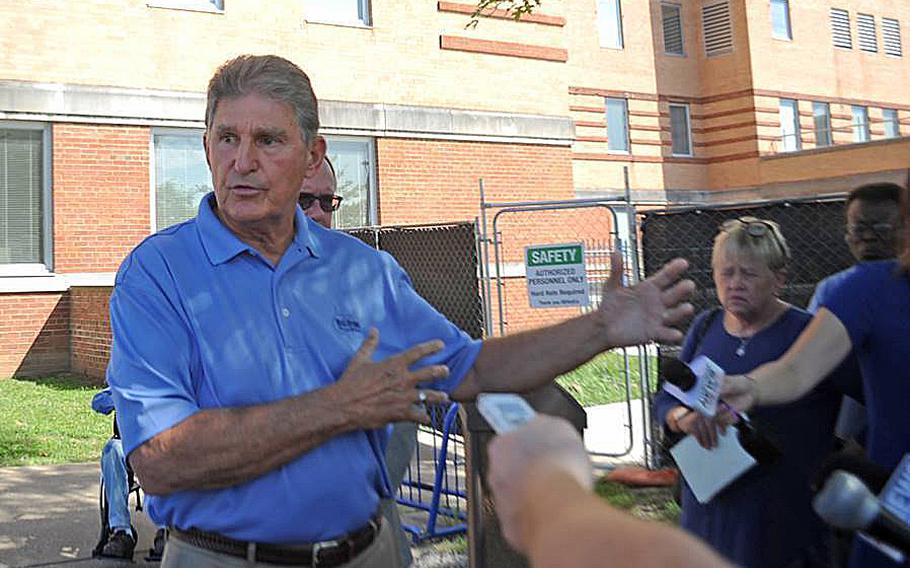 Sen. Joe Manchin answers questions outside of the Louis A. Johnson VA Medical Center in Clarksburg, W.Va. Manchin had called for an expedited investigation into the suspicious deaths at the hospital. Court documents unsealed Tuesday, July 14, 2020, show Reta Mays, a former nursing assistant at the facility is being charged with second degree murder in the deaths of seven people. (Eddie Trizzino, The Times-West Virginian/AP)

WASHINGTON — A former Department of Veterans Affairs nursing assistant admitted in federal court Tuesday to killing seven patients by injecting them with fatal doses of insulin.

Reta Mays, 45, a former staff member at the Louis A. Johnson VA Medical Center in Clarksburg, West Virginia, was charged earlier Tuesday with seven counts of second-degree murder, as well as assault with the intent to commit murder. Mays was accused of purposefully injecting patients with lethal doses of insulin between July 2017 and June 2018 and attempting to kill an eighth patient.

Mays pleaded guilty on all eight counts Tuesday afternoon as part of a written plea agreement. She faces a maximum penalty of seven life sentences, an additional 20-year prison sentence and $2 million in fines.

“It is beyond disturbing that someone would seek out the opportunity to work in the health care field, to aid the sick, and then twist their duty and willingly end the life of their patients,” said Doug Olson, an FBI agent who worked on the case.

Sentencing will occur at a later date. Her lawyers asked for six months to prepare their defense for a lesser penalty, but Assistant U.S. Attorney Jarod Douglas argued that was too long. Some of the victims' family members were in poor health and wanted to see resolution, he said. District Judge Thomas S. Kleeh scheduled a status update for Oct. 30.

Mays, with cropped brown hair and glasses, sat between her lawyers in U.S. District Court on Tuesday, wearing a white T-shirt with a mask covering her nose and mouth. The hearing was broadcast over livestream because of restrictions due to the coronavirus pandemic.

Under routine questioning by Kleeh, Mays got choked up at points. She responded with a feeble, “Yes, sir,” each time Kleeh asked whether she wanted to move forward with her guilty plea and understood the consequences.

Mays told the judge she was undergoing VA treatment for post-traumatic stress disorder, high blood pressure and high cholesterol. Details of her military background were not immediately known Tuesday.

Mays was hired as a night-shift nursing assistant at the Clarksburg facility in 2015. According to court documents, she was fired in July 2018 after the hospital had begun an internal investigation into multiple deaths in her ward. A doctor had noted that several patients in the ward had died from severe hypoglycemia, even though they weren’t diabetic.

VA Inspector General Michael Missal said he was informed of the suspicious deaths in June 2018 and immediately sent a team of investigators to the Clarksburg hospital. They identified Mays as a person of interest “within days,” he said.

“We had her removed from patient care immediately,” Missal said Tuesday. “That act alone may have saved countless lives.”

One victim, named only as W.A.H. in court records, was a 96-year-old World War II veteran. The final patient, whom Mays attempted to kill, was listed in court records as R.R.P. He was a 92-year-old World War II veteran. R.R.P. died at a nursing home weeks after receiving the dosage of insulin, but medical examiners couldn’t determine whether the injection was the cause of death, prosecutors said.

Twenty-six family members of the victims were in the courtroom during the plea hearing Tuesday.

He said Mays’ motivation may come to light as her attorneys mount a defense for a lesser sentence.

“She denied it for a long time, until most recently when she realized the strength of our case,” Powell said.

Powell and other federal authorities defended themselves Tuesday against criticisms about the slow pace of the investigation. Sen. Joe Manchin, D-W.Va., repeatedly urged federal officials to name their suspect. In a statement Tuesday, he said the charges against Mays were overdue.

“The investigation in this matter… was complicated, extraordinarily time intensive and the focus of numerous agents and prosecutors for two years,” Powell said. “We wanted to secure this case down, to nail it down in every possible way.”

The investigation included exhuming bodies of the victims, as well as other potential victims. Powell said he didn’t anticipate bringing any more charges against Mays.