Flying through retirement: Vet and his Harrier star in air show business 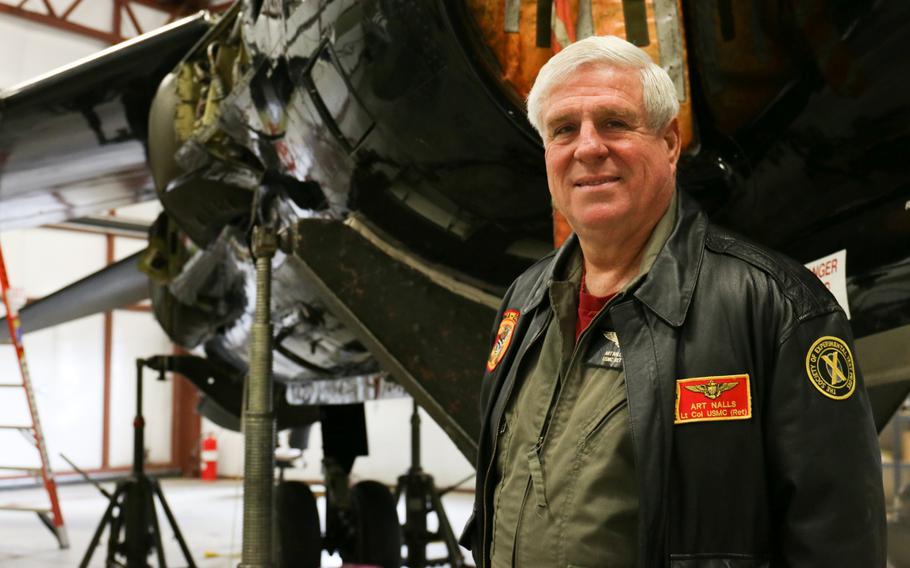 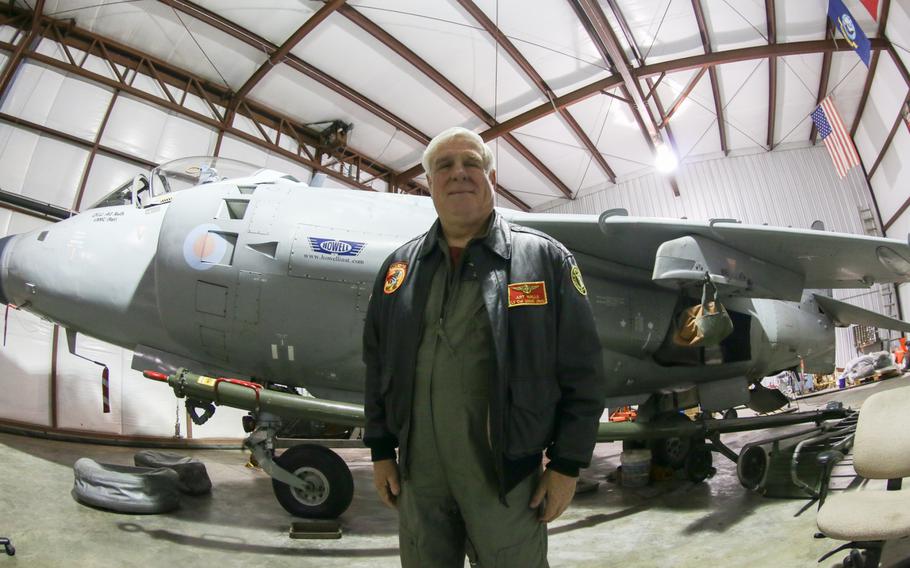 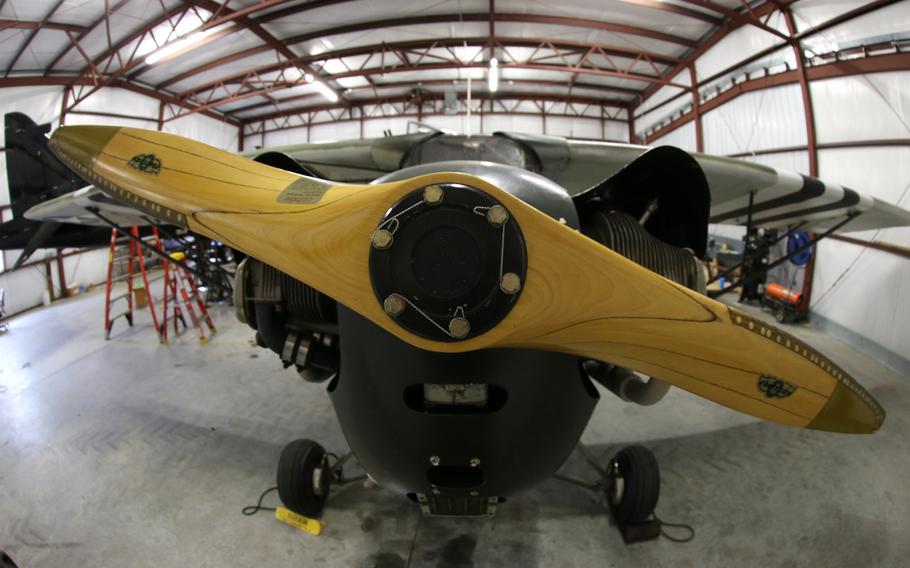 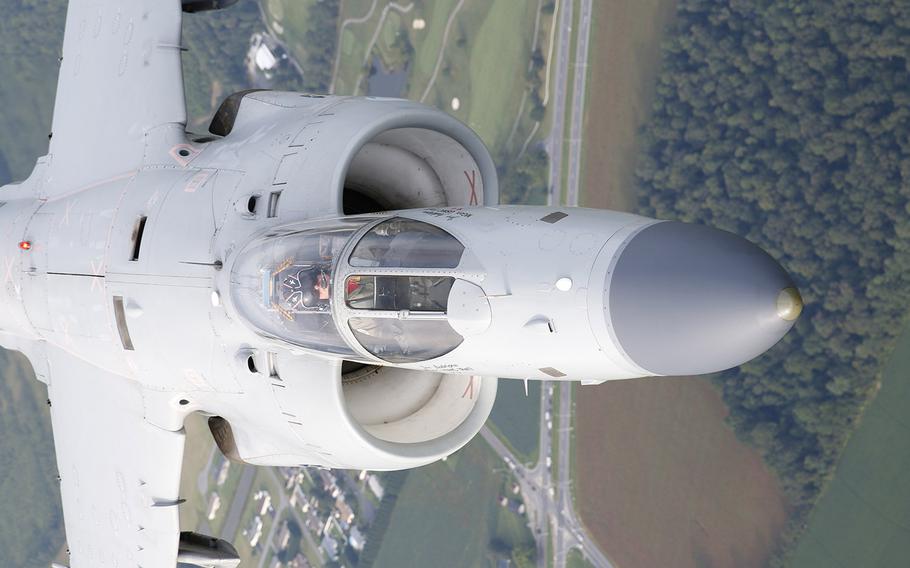 Art Nalls, a retired Marine Corps test pilot, flies above the earth in his Sea Harrier FA.2 during a performance in 2017. (Photo courtesy of Art Nalls)

WASHINGTON — Military retirees get involved in some fairly interesting hobbies. Hunting is popular among former servicemembers, along with fishing, hiking, camping, gaming and even historic battle re-enactments.

Less common, however, is casually flying around in a multimillion-dollar war machine. Leave it to a Marine — retired pilot Art Nalls — to change the definition of “retiree hobby.”

Nalls, 65, is the proud owner of several aircraft. He and his crew at Nalls Aviation own and maintain a tiny BD-5J, a Piper Cub Mk-104 and a Czech-made L-39C Albatros jet trainer.

Impressive machines, to be sure. But the pride and joy of Nalls’ fleet are two British Sea Harrier jets – one a single-seat FA.2 and a much rarer two-seater TMk-8. According to Nalls, his is one of 46 of that vertical take-off and landing craft ever made, and it’s the only one left flying.

“I’ve flown lots of different aircraft,” he said. “But the Harrier has been my absolute favorite airplane.”

Nalls, a Naval Academy graduate, received his pilot’s wings in 1979. He was assigned to the Marine air station at Cherry Point, N.C., where he would become part of the team of pilots training on the relatively new Harrier jet.

“At that time – the late ‘70s – the Harrier didn’t have a very good reputation,” he said, referring to its record for crashing. “In fact, when they read my orders out loud, a lot of the other pilots that were going to A-4s and various other fleet airplanes started making ‘dead bug’ jokes about it.”

Harrier AV-8A squadrons were put into action by the Marine Corps in early 1971. The VTOL capabilities made the craft a natural addition to air wings and it remains in action to this day, though its days are numbered, thanks to the F-35 introduction.

Nalls spent five years flying the Harrier in conditions ranging from the austere to what passes as every day for a fighter pilot. He said he has landed the jet on everything from grass to roadways to ships.

“I had a chance to do all of that, whereas some of my contemporaries were probably getting more flight time, but they weren’t getting as much experience at being what a real Marine is -- where you’re using this thing as a combat weapons system,” he said.

He became a test pilot in 1985, working as a Marine pilot for the Air Force at Edwards Air Force Base in California. He flew 63 aircraft over a year, everything from bombers to cargo planes. When his tour of duty was up, he was assigned to be part of the initial cadre for the new AV-8B Harrier II.

“As a young test pilot, being thrown into that environment, I couldn’t have asked for anything better,” Nalls said. “I thoroughly enjoyed that work.”

It came to an abrupt end when one morning he woke up with a medical condition that kept him from flying. He said he preferred to keep that condition private, but it was a real blow to a man who had spent his entire career among the clouds.

“My entire life had been as a Marine pilot, and now, in the blink of an eye, I’m grounded,” he said. Nalls spent the remainder of career in different jobs, including one working out a protocol to standardize investigation into Gulf War Syndrome.

But his heart was in flying. “Obviously I wasn’t flying at that time and that was the real love of my life,” Nalls said.

He retired as a lieutenant colonel and soon found his way back into a cockpit. “I went to an air show and saw people flying and thought, ‘Well, I can do that,’ ” he said.

The medical condition that kept him from flying was cleared up by a civilian surgeon. “After I healed, the problems were gone, and I was able to pass a FAA flight physical and began flying again,” he said. “So now I’m a student with a couple thousand hours in different types of airplanes and I’ve enjoyed that ever since.”

Nalls, with his extensive flight time, moved into the air show business. Eventually he was able to purchase his own aircraft, the first being a Russian-made YAK-3. The problem was that producers of the shows weren’t too keen on having a Russian aircraft at American events. That wasn’t as much of a problem, he said, for his next craft – the L-39. That had dual controls, meaning he could take others up in the craft.

That was more attractive to air show runners, but still not as popular as the craft he spent years flying for the Marine Corps. The Harrier was extremely popular.

“It steals the show,” Nalls said. “Everybody remembers where they were the first time they saw a Harrier come to a stop at about 100 feet, back up, turn around and either take off or land.”

So, he went on the search for a Harrier of his own. Nalls got a hit in 2006. The British military was selling off surplus Sea Harriers at the time. Nalls went to what was then RAF Bentwaters, near Suffolk, England. He signed a one-page contract and was soon on his way back to the states with a mostly-intact Harrier jet. He and his team of volunteer crewmembers spent thousands of hours – one estimate puts it at 5,000 hours – getting it in working order.

Nalls has a team of five other pilots and mechanics who volunteer to help with his air show business. Nalls Aviation and Team SHAR – British shorthand for Sea Harrier – perform at air shows across the U.S.

He’s a popular guy. AARP recently released the first episode of an ongoing documentary on Nalls and his crew. YouTube is full of clips of him wowing audiences with what he says is the only civilian-owned Harrier. He said he plans on flying for as long as he can.

Not a bad way to spend a retirement.