First monument honoring all military women to be unveiled at Arlington 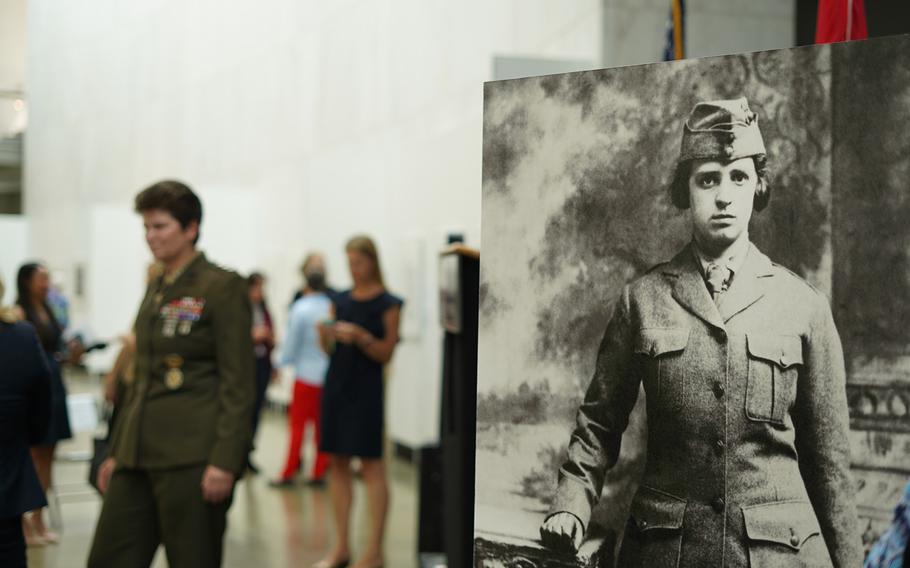 A portrait a female Marine is displayed at the exhibition Women Marines — Proudly Serving 1918-2018 at the Women in Military Service for America Memorial in Arlington, Va., on Aug. 12, 2018. (Paul A. Ochoa/U.S. Marine Corps)

WASHINGTON — The Women in Military Service for America Memorial, at the gateway to Arlington National Cemetery, is regularly placed on lists of “hidden gems” within the nation’s capital — a perspective on the memorial that its leaders are trying to change.

“I don’t want it to be hidden,” said Phyllis Wilson, president of the Women in Military Service for America Memorial Foundation and a retired chief warrant officer.

The memorial has been closed for about seven months during the coronavirus pandemic. It reopens Oct. 18 with a new feature that Wilson hopes will draw more people inside: the first monument in the Washington area that honors all military women.

The monument, titled The Pledge, will be unveiled during a ceremony Oct. 17. In bronze, it depicts a service woman outfitted for combat, kneeling and staring face-to-face with a military working dog. The base of the monument says it honors “all women of the U.S. military, past present and future.”

It will be placed in the center of the memorial’s lobby to draw visitors in to see the rest of the exhibits, Wilson said. The monument was commissioned by the U.S. War Dogs Association and is meant to honor female veterans and military dogs.

“People may come in for the dog, but then stay and learn that women have served from the Revolutionary War to today, when they can serve in every single career field they can qualify for,” Wilson said. “Because women are a smaller — but ever-growing — percentage of the military and veteran populations, sometimes people fail to think of us in these more dangerous roles, like military dog handler.”

One side of the monument is inscribed with a quote from Anne Sosh Brehm, a first lieutenant in the Army Nurse Corps during World War II: “Let the generations know that women in uniform also guaranteed their freedom. That our resolve was just as great as the brave men who stand among us. And with victory, our hearts were just as full and beat just as fast — that the tears fell just as hard for those we left behind.”

Wilson and sculptor Susan Bahary said the monument’s unveiling comes at a poignant time for women in America. This year marks the 100th anniversary of the passage of the 19th Amendment, guaranteeing and protecting women’s constitutional right to vote. It also comes after the death of Justice Ruth Bader Ginsburg on Sept. 18 — a leading voice for gender equality and women’s rights.

Ginsburg helped secure equal benefits for female service members and in 1970 pushed the military to drop its policy that forced pregnant troops to leave the service. She also helped open the Virginia Military Institute to women in the 1990s. Ginsburg was buried beside her husband in Arlington National Cemetery in September. That day, the Women in Military Service for America Memorial was draped in black in her honor, Wilson said.

Bahary, whose work can be found in national museums and on military installations, will attend the unveiling Oct. 17. The Pledge is supposed to depict a final moment between a service woman and military dog before they go into combat, she said. It represents their pledge to their country, as well as to each other.

“I designed it to represent — in an emotional way — the strength, capability and compassion of all our service women,” Bahary said. “Sometimes bringing in an animal has a special effect of drawing people in and making their hearts more open. I think once we open our hearts, we’re able to accept the message more easily.”

In addition to the new monument, Wilson is working on bigger changes to the memorial — including a new fundraising strategy and a major renovation.

About 3 million people visit Arlington National Cemetery in a typical year. Though it’s on the cemetery grounds, the Women in the Military Service for America Memorial only gets about 100,000 visitors, Wilson said. During the past several years, the memorial has struggled to stay afloat.

Wilson became president of the memorial foundation late last year and took a hard look at the memorial’s donors, she said.

“Right now, more than 70% of donations come from women who have worn the uniform,” Wilson said. “Honestly, I find that disconcerting. The memorial was built to honor them, not to encourage them to keep it funded.”

Wilson has changed strategy and put more focus on reaching out to defense contractors and other American corporations for financial support. She plans to initiate a new fundraising campaign next year, in the hopes of financing a redesign of the memorial in 2022 and 2023.

“We want people to experience the women’s memorial in a whole new way,” Wilson said. “I just envision this being one of those things where people will walk out feeling uplifted and inspired about how things have changed.”

To enter the memorial after Oct. 17, members of the public must register for timed passes.