Expanded on-base shopping for many US veterans faces hurdles overseas 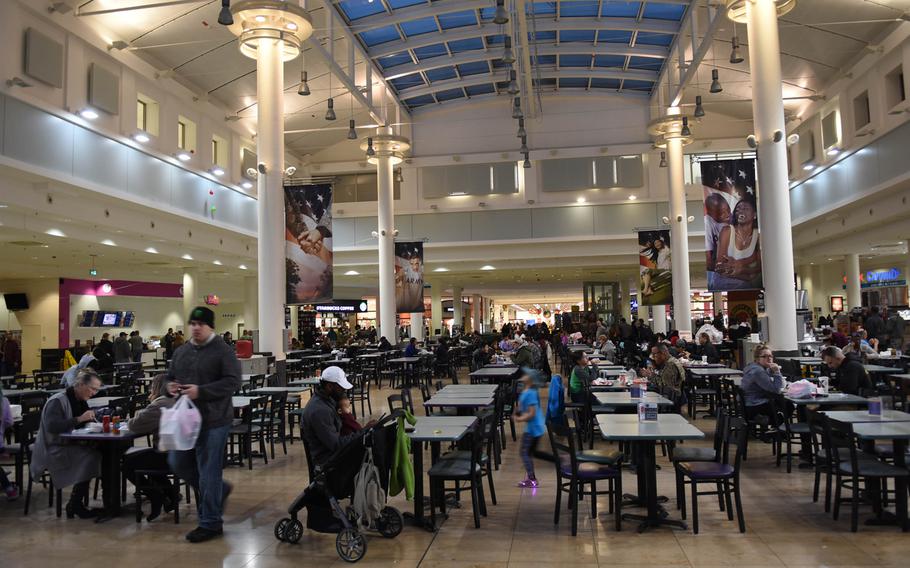 Customers eat and shop inside the Kaiserslautern Military Community Center at Ramstein Air Base, Germany. Under a new law that became effective Jan. 1, more disabled veterans can now shop on base. Germany is the only overseas location so far where military and local officials have established a procedure for veterans to access the benefits. ()

KAISERSLAUTERN, Germany — The new rules that extend on-base shopping privileges to an additional 4.1 million U.S. veterans can’t be applied in some countries and face restrictions in others, officials said.

So far, outside of the United States, the exchange and commissary benefits are only available in Germany, through a process that includes getting a Veteran Health Identification Card in the U.S., being vetted for base access and then registering with U.S. and German customs offices.

Though on-base products are free from U.S. taxes, veterans will have to report what they buy and pay German taxes.

At least 24 veterans have been approved to use the shopping benefit at U.S. bases in Germany since Jan. 1, said Frank Phillips, a Veterans Affairs service officer for Europe who works from U.S. Army Garrison Ansbach.

Those who qualify include disabled veterans with a service-connected condition, Purple Heart recipients, former prisoners of war and designated primary family caregivers of eligible veterans.

About 28,000 veterans and their dependents reside in Germany, though it’s unknown how many are eligible for on-base shopping privileges under the new law, Phillips said.

The military is also trying to expand the program to other countries in Europe, he said.

In Asia, the South Korean government is reviewing whether to authorize expanded access on a case-by-case basis, said Jim Guzior, a spokesman with U.S. Army Installation Management Command-Pacific.

The benefit will not be granted in Japan, he said. Use of base facilities by veterans who aren’t covered by the status of forces agreement would require a negotiated exception to SOFA, he said.

The law also gives these veterans access to Morale, Welfare and Recreation facilities, such as golf courses and bowling centers.

Before the expansion, only veterans with 100% service-connected disabilities could shop on base, in addition to military retirees.

To qualify under the expanded law, disabled veterans need to have a VA claim decision letter stating a service-connected disability of any level.

One of the hurdles to using the benefit overseas is obtaining a Veteran Health Identification Card, which is only issued by the VA in the United States. The card displays the veteran’s eligibility status.

Phillips said officials are working on getting an exception letter approved for veterans who cannot visit the States.

In Germany, veterans without base access must pass a background check before getting an installation pass.

The pass will allow veterans access to a single base and Landstuhl Regional Medical Center. Registration with German customs is also required to get a customs form.

Once a month, veterans must present the card to customs along with all original receipts for purchases made the previous month, to pay applicable German taxes and import fees.

Eligible veterans can sign in up to four visitors on base, Army officials said.