Double amputee completes handcycle ride across US for wounded veterans 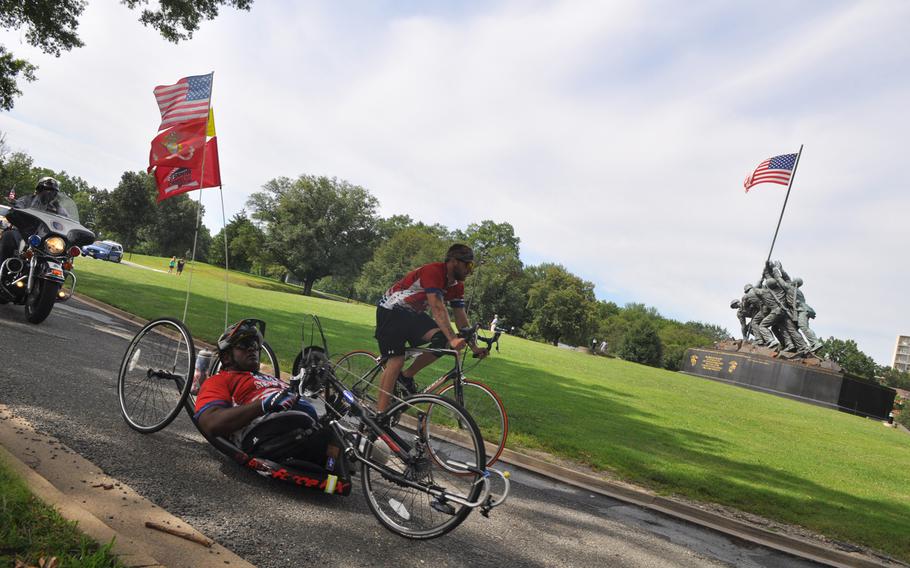 Former Marine Toran Gaal (sit-down bicycle) cycles past the Marine Corps War Memorial in Arlington, Virginia Sunday at the end of a more than 4,000 mile journey across the country. Gaal, who lost both legs and suffered a severe brain injury in Afghanistan was riding to raise money for the Semper Fi Fund and to inspire other wounded veterans. (Heath Druzin/Stars and Stripes)

Former Marine Toran Gaal (sit-down bicycle) cycles past the Marine Corps War Memorial in Arlington, Virginia Sunday at the end of a more than 4,000 mile journey across the country. Gaal, who lost both legs and suffered a severe brain injury in Afghanistan was riding to raise money for the Semper Fi Fund and to inspire other wounded veterans. (Heath Druzin/Stars and Stripes) 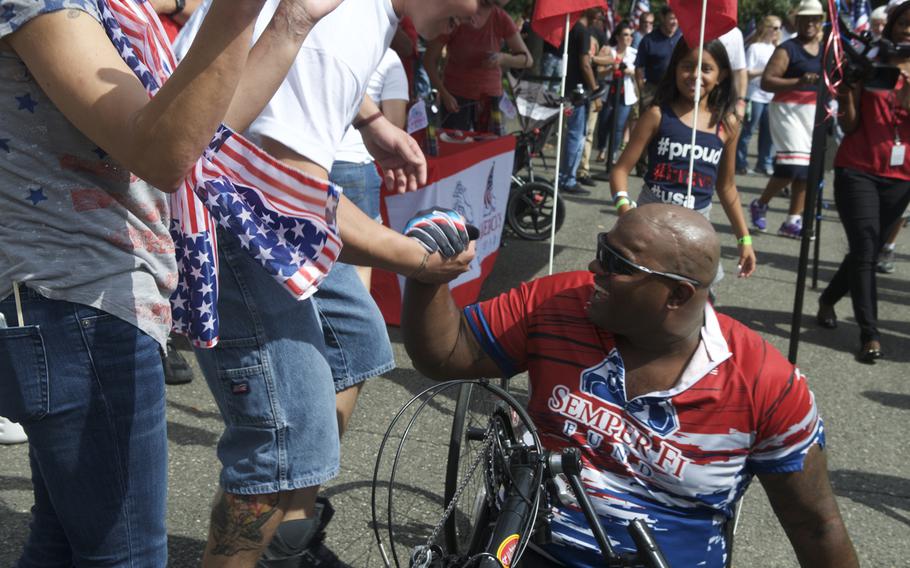 A friend greets former Marine Toran Gaal at the end of his cross-country handcycle ride that began in San Diego, California, on June 1 and ended Sunday in Arlington, Va. (Heath Druzin/Stars and Stripes) 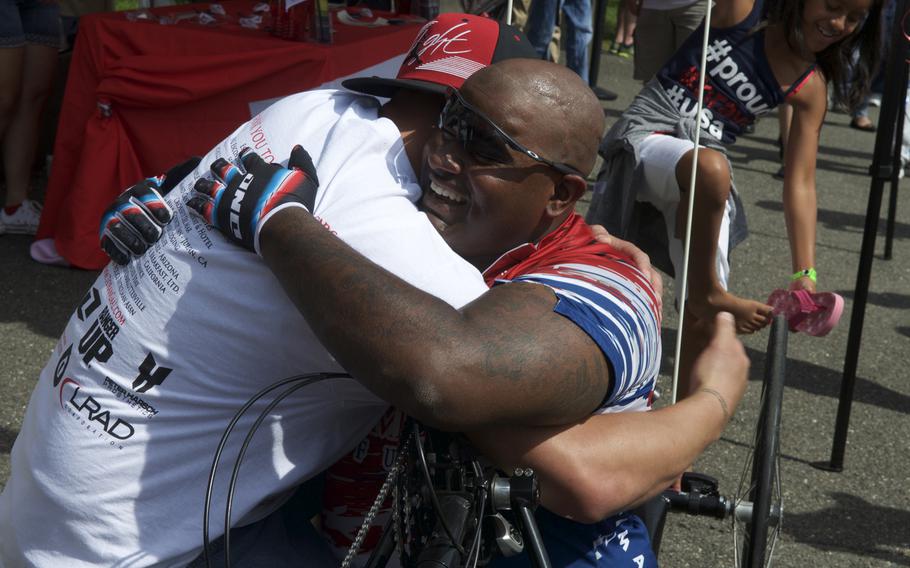 Former Marine Toran Gaal hugs a friend Sunday in Arlington, Virginia at the end of a more than 4,000 handcycle trip that raised nearly $50,000 for the Semper Fi Fund. (Heath Druzin/Stars and Stripes) 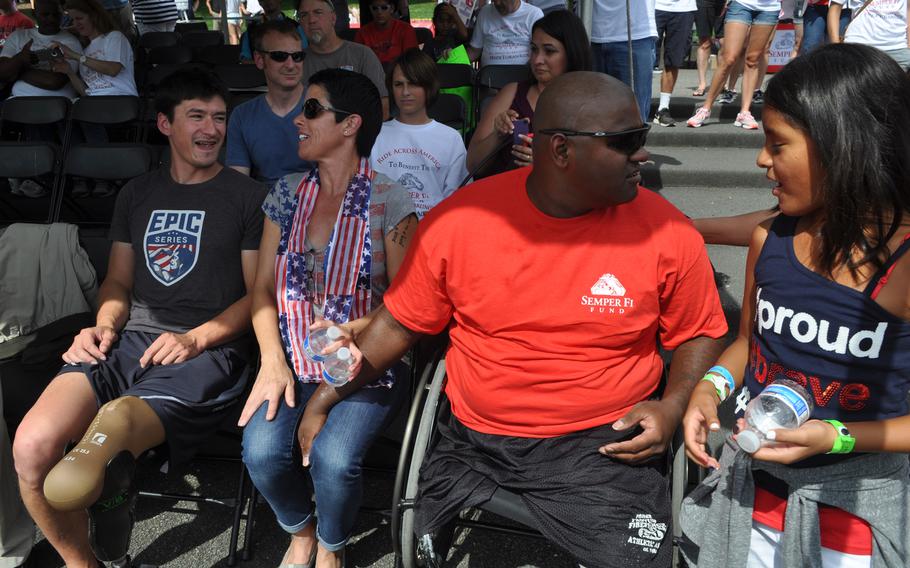 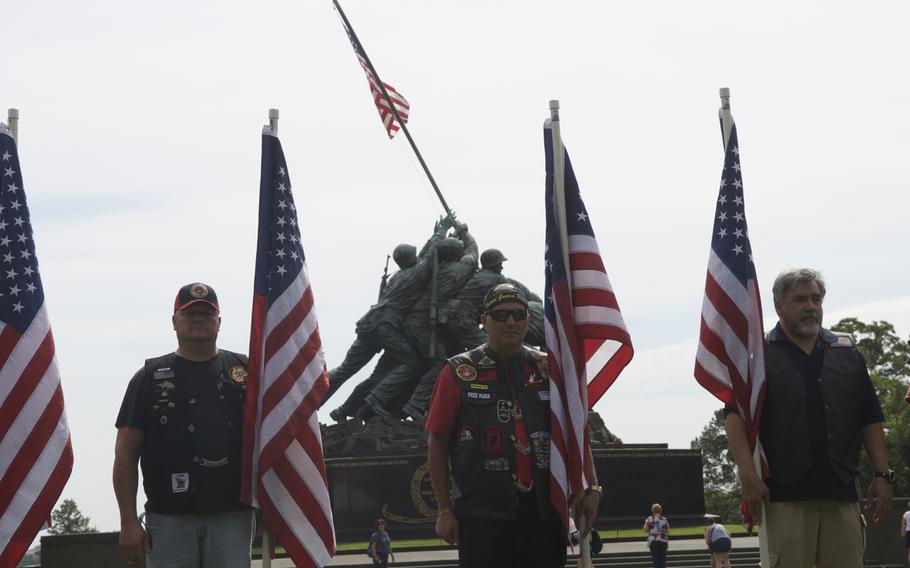 Members of the Patriot Guard stand at a ceremony Sunday in Arlington, Virginia for former Marine Toran Gaal, a double amputee, who handcycled across the country to raise money for the Semper Fi Fund. (Heath Druzin/Stars and Stripes) ARLINGTON, Va. — What started as a joke between Marines in a San Diego recovery room in the spring ended Sunday, more than 4,000 miles away in Virginia, as double amputee Toran Gaal hand-cranked his bike past the Marine Corps War Memorial, through a row of American flags and into the arms of his wife and children.

Gaal, 28, had been on the road in his handcycle since June 1 with his buddy and fellow Marine amputee, Brian Riley, trailing in a support van, raising money for the Semper Fi Fund and trying to inspire veterans struggling with physical and mental injuries.

“I want to show everybody what the human body is capable of,” he said. “I want to use [the ride] as a beacon of hope.”

The journey began in June 2011, in Sangin district, Afghanistan, one of the bloodiest battlegrounds of America’s war there. Gaal, then a 24-year-old squad leader, stepped onto a bomb, and everything went dark.

Gaal’s wounds were profound, even for a generation of vets for whom surviving catastrophic injuries has become commonplace thanks to improved body armor and safer vehicles. He lost both legs and had to have his right hip amputated, severely complicating his quest to walk with prosthetics. He also suffered a severe brain injury that left him in a coma for two months.

Gaal learned to walk again after months of painful recovery, and he started peeling off the miles on a sit-down bike with a hand crank in place of pedals. Gaal completed four handcycle marathons before embarking on a cross-country journey that would take him over dizzying mountain passes, across baking plains and into the cloying humidity of a Southern summer.

“The toughest thing was getting over the Rocky Mountains,” he said. “It was really just kind of one crank at a time.”

Defying limitationsBefore envisioning his journey across America, Gaal met Riley — who served in a different unit but also was injured in Sangin district — in a San Diego recovery center. Riley’s left leg was amputated after a gunshot wound, but he has recovered and now teaches CrossFit. The two clicked by pushing each other, and sometimes their doctors, to defy their supposed limitations.

“The reason we became friends is both of us were always striving for self-improvement,” Riley said.

The idea for the cross-country trip began with Gaal and Riley lamenting what they saw as shortcomings with many veterans’ charities, joking that they would start charities for each other. Then Gaal’s wife, Lisa Graves-Gaal, got involved, and things got serious as she lined up sponsors and hotel rooms. Gaal, an avid cyclist, got serious as well, completing four handcycle marathons as training. On June 1, Gaal and Riley took off from San Diego.

The men raised nearly $50,000 for the Semper Fi Fund, a charity that offers assistance to wounded servicemembers and their families, and were welcomed by big cities and tiny towns. More important than the money, though, was giving hope to other wounded veterans.

“Part of the process for him was not just to ride his bike, but to raise awareness that life after is possible,” Gaal’s wife said. “He is the perfect person to spread that message.”

“They never reached out for help before, and maybe they will now” after seeing Gaal’s accomplishments, she said.

No more negativesDuring the course of 63 days on the road, Riley tried to stay sane by listening to audio Spanish lessons and music while cruising at 12 mph behind his friend. Gaal had to push through the physical slog of mile after grueling mile for eight to 10 hours per day, and to keep dark thoughts at bay.

“The biggest thing is it just lets you just kind of put any thoughts or negativity you have in your mind to the side, and you’re focused on the task at hand in front of you,” he said. “You don’t spend that time wondering, ‘What if, what if.’ ”

For Gaal, it was also a way to get to know his country.

“Everybody spends life going over the country at 30,000 feet or above, or going 70 to 80 miles per hour, so they don’t get a chance to really get an appreciation of the country for what it is,” he said.

Despite the devastation of his injury and his long, painful recovery, Gaal has a special reason to look at the bright side. While recovering in the U.S., Gaal agreed to be interviewed for a book on wounded veterans. During the course of several interviews with author Lisa Graves, the two fell in love and got married. After that, Gaal said, he stopped looking at the negatives.