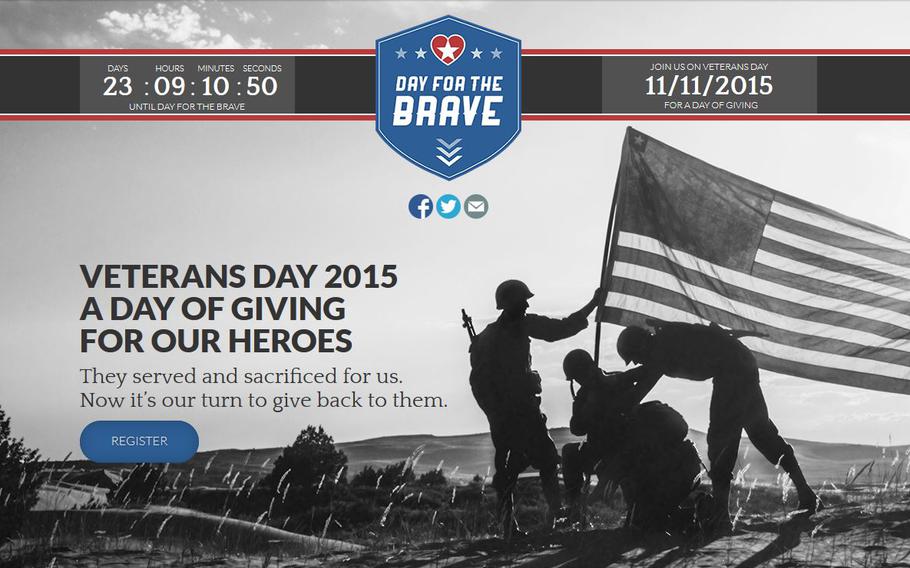 A major crowdfunding site is trying to add to American Veterans Day traditions, launching a one-day nationwide fundraising drive for charities focused on people who have served.

Razoo, which specializes in online fundraising for nonprofit companies, is hosting Day For The Brave, an online event that will include more than 100 veteran-focused charities, from small local groups to familiar names.

“We just want people to be a little more thoughtful about those who put on the uniform and protect us,” Razoo CEO Tom Matthews said in an interview with Stars and Stripes.

The idea was part of a challenge to employees to come up with a pro bono event, Matthews said. Normally, Razoo is paid 4.9 percent of donations but the company will waive its fee for this drive. Charities will only be responsible for fees charged by credit card companies.

“As a typical American, you often see it as a holiday and a day off school or a day off work and a day you can buy a mattress at a deep discount,” he said. “Ultimately, over time, it’s become this national holiday where people forget what this day is all about.”

So far, roughly 100 veterans groups have signed up for the drive, but Matthews hopes that will be closer to 200 by Veterans Day. Razoo also is working to find companies that will offer matching donations.

To participate, organizations must be 501c3 nonprofits in good standing and Razoo is partnering with the charity rating agency Guidestar to post each organization’s rating, Matthews said.

Crowdfunding has fundamentally changed the way nonprofits raise money, said Wendy Lethin, co-founder of Semper Fi Fund, which is participating in the Day For The Brave.

Crowdfunding also has broadened the pool of givers, making charity more accessible for younger people and allowing anyone to be a philanthropist, said Stephanie Powers, the senior director for policy and partnerships for Council on Foundations, one of the organizations leading a national fundraising drive to purchase Welcome Home Kits to help homeless veterans with the costs of finding and moving into a home.

People involved with Day For The Brave said they hope it catches on like “Giving Tuesday,” in which charities and large companies participate in a fundraising campaign the Tuesday after Thanksgiving. That started in 2012 with a local campaign by a New York City YMCA to piggy back on the consumer carnivals of Black Friday and Cyber Monday and has become a nationwide effort.

“It was a flicker of an idea that turned into a spark and in the last several years is a day when a lot of money gets raised,” Matthews said. “And we hope to do the same thing with Veterans Day.”

Online: Day For The Brave