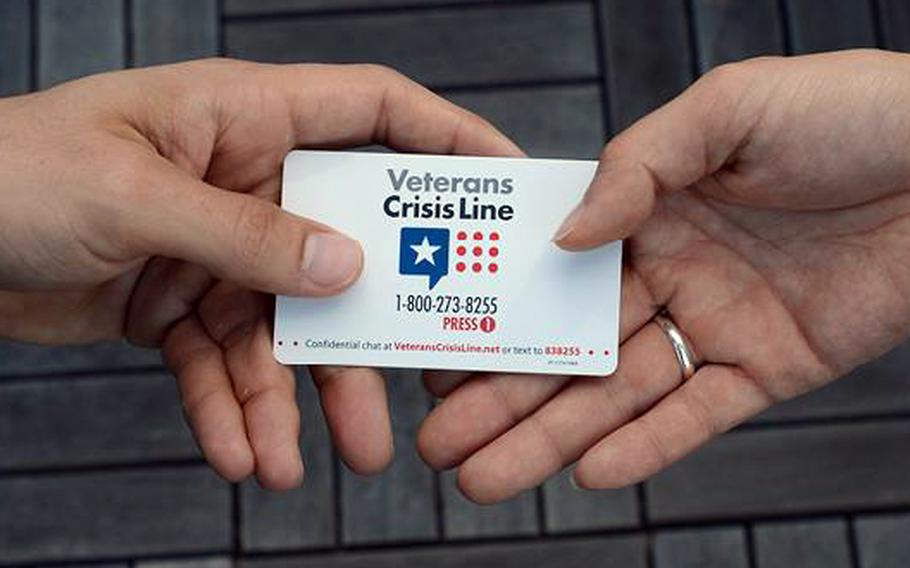 WASHINGTON — Two dispatchers at the Veterans Crisis Line failed to help a veteran who died of an overdose just hours after calling the hotline, an independent watchdog agency reported this week.

The veteran died from a mixture of alcohol, antidepressants and over-the-counter medications on July 4, 2018. Two crisis line responders spoke to the veteran that day but failed to consider his or her risk for overdose and didn’t contact local authorities, according to a new report from the Department of Veterans Affairs Office of Inspector General.

Responders marked the veteran at “moderate to low risk,” despite the veteran reporting a previous suicide attempt and having suicidal thoughts within the past two months. The veteran also told responders he or she had a gun, was drinking and taking over-the-counter medication.

“This report is particularly disturbing because the veteran spoke to two different [Veterans Crisis Line] responders and reported suicidal ideation, a past suicide attempt, access to lethal means and intoxication from alcohol and drugs,” said Sen. Jon Tester, D-Mont., in a letter to VA Secretary Robert Wilkie on Thursday. “Despite these red flags, neither responder requested an emergency dispatch to check on the veteran and provide any necessary, immediate intervention.”

The veteran was in his or her 30s and had a history of depression and alcohol use disorder. He or she had received intensive outpatient mental health treatment at a VA facility just months before. The report does not identify the veteran and omitted other identifying factors, such as gender.

He or she called the crisis line about 4:30 a.m. July 4, 2018, describing survivor’s guilt and frustration with fireworks, according to the IG report. The veteran reported taking seven shots of whiskey earlier that morning and two to four over-the-counter pills.

The caller told the first crisis line responder that he or she had a gun but no bullets. The responder received the veteran’s agreement to not touch the firearm, not drink anymore and to contact the crisis line again if he or she needed more support.

The veteran called the crisis line again about an hour later and spoke to another responder. After about five minutes, the veteran disconnected from the call. The second responder tried four times to get back in touch with the veteran but failed.

The veteran was found dead about 12 hours after the first call. The medical examiner ruled the death an overdose but could not determine whether it was purposeful.

As part of its investigation, the IG spoke to five experts on crisis hotlines. When presented with a similar scenario, four of the experts said that a rescue should be initiated.

The Office of Inspector General “would have expected an emergency dispatch to be initiated based on the caller’s intoxication, high risk for suicide, and lethal means access,” the report reads.

The IG made eight recommendations to the Veterans Crisis Line, including that they consider disciplinary action for the responders who handled the calls. The IG also recommended that the hotline establish policies for responders to assess and respond to veterans’ risk of overdosing.

Richard Stone, the executive in charge of the Veterans Health Administration, agreed to the recommendations and said the department would establish by April 2021 a policy to assess callers’ risk for overdose.

“The staff and leaders of the Veterans Crisis Line are saddened by the loss of any veteran to suicide,” Stone said in a written response to the IG. “[The hotline] will continue working to enhance processes and procedures for lethal means assessment, safety planning and identification, and handling of substance use and overdose risks.”

Tester, the ranking Democrat on the Senate Veterans’ Affairs Committee, responded to the report Thursday night, demanding that the VA follow through on the recommendations. Tester argued that in addition to the responders’ failures in this case, there were “critical policy failures” at the crisis line “that could have contributed to this veteran’s death.”

“This IG report should serve as a call to action for the department and the [crisis line],” Tester wrote. “Given the loss of life and gravity of the situation, I ask that VA expedite resolution to the eight recommendations issued in this report.”