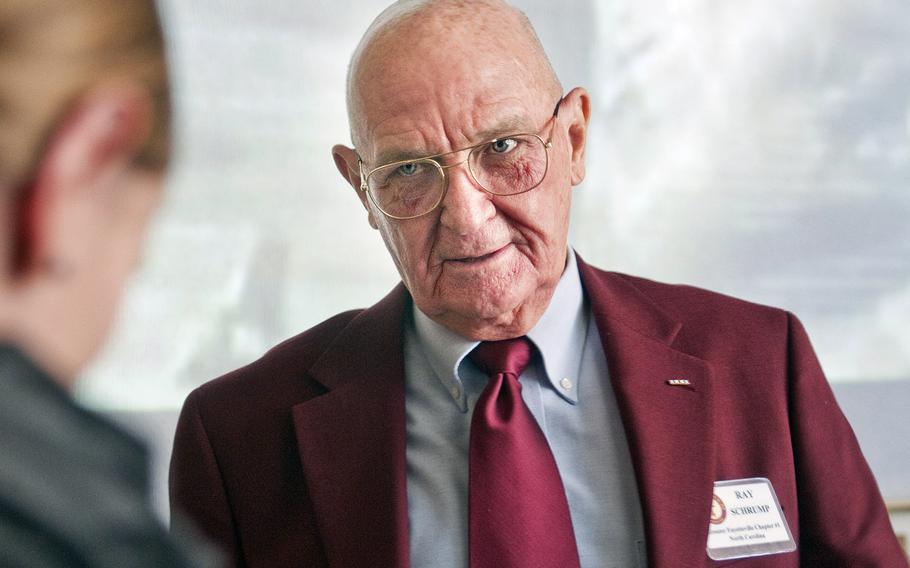 FAYETTEVILLE, N.C. (Tribune News Service) — The thin, shiny bracelet Ray Schrump gingerly slipped on his left wrist Saturday afternoon served as a bridge and a bandage to the still-raw emotion of Vietnam.

The bracelet, one of about 5 million bracelets worn to honor military servicemen who were POW/MIA in Vietnam, read simply "MAJ. RAYMOND SCHRUMP, 5-23-68."

This one was worn by Harold Flowers, then a lanky eighth-grader at Coats Union Junior High School in Harnett County.

Saturday, Flowers was able to do what few who wore the bracelets could. He shook hands with the name on his bracelet.

The meeting at the Airborne & Special operations Museum was arranged after Flowers discovered the bracelet in a box of high school memorabilia.

After a couple of days of searching, Elskamp called Flowers.

"I told Harold that we found him, that he was alive and well," Elskamp said. "Then I asked, 'Would you like to meet him? He lives just up the road from you.'"

Flowers, a fire marshal in Harnett County, was floored.

"It's overpowering, what I'm feeling now," said Flowers, now 60, as the two met.

A crowd of more than 60 watched, including several members of the Rolling Thunder veterans advocacy group, as Flowers and Schrump shook hands, then hugged.

"It's so hard to explain the personal attachment," said Schrump, 83, who retired as lieutenant colonel. . Since 2011, he has lived near Vass, just a few miles from Flowers.

In May of 1968, Schrump was a 36-year-old major serving with Special Forces in South Vietnam.

While responding to an ambush, he was captured by Viet Cong forces along the Cambodian border.

For nearly five years, he suffered beatings, malnourishment and constant fear of death.

"I think ... no, I believe ... that had we known about them, that so many people were thinking and praying for us, it would have given us strength," Schrump said. "Many men just wore out or gave up. One died in my arms there. Had they known, more might have found strength to continue."

As it was, Schrump said, he didn't know about them until arriving home in California in 1973. He saw a sign that read: "Ray Schrump. We have your bracelet!"

It was the first Ray Schrump bracelets that found their way to him. Saturday's makes about 750.

Elskamp says that several other people have contacted his organization, seeking help in locating POW/MIAs from bracelets.

"Clearly, many people have an emotional bond to the names they wore on their wrists," Elskamp said.

Those names, Schrump says, reflect an emotional mixture of pain and pride.

Schrump still wears a bracelet with the name "Darrell Johnston" on it. A North Carolina native, Johnson never came back from Vietnam.

"I am no hero," he said. "There are still some who never came home. But with this bracelet, I now have a bond with Harold, as strong as any bond of brotherhood. He didn't forget us, and I won't forget that now."