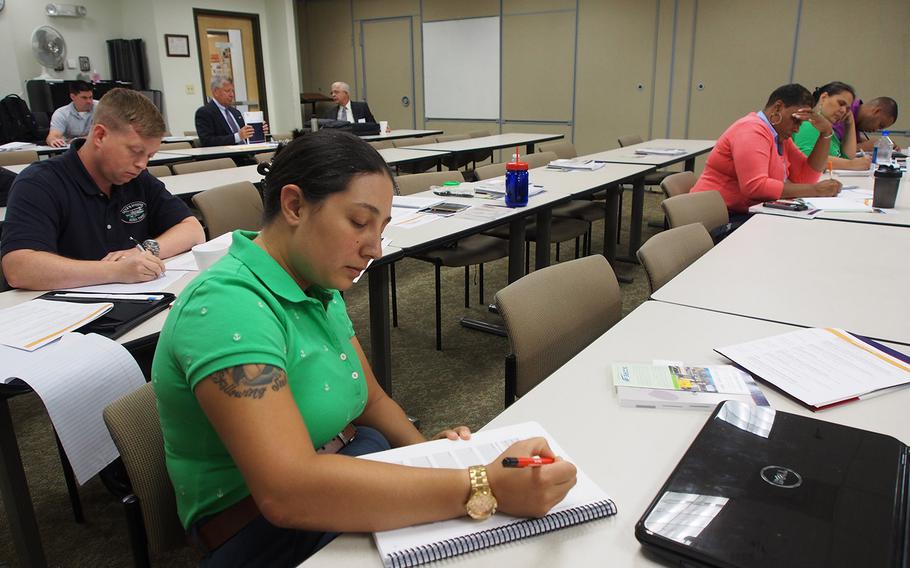 Lt. Maria DeCristoforo, who hopes to open a brewery after leaving the Navy next year, takes notes during a Boots to Business class at Marine Corps Base Quantico Thursday. The program, offered at 165 military installations around the world, is aimed at troops and veterans interested in entrepreneurship. (Heath Druzin/Stars and Stripes)

Lt. Maria DeCristoforo, who hopes to open a brewery after leaving the Navy next year, takes notes during a Boots to Business class at Marine Corps Base Quantico Thursday. The program, offered at 165 military installations around the world, is aimed at troops and veterans interested in entrepreneurship. (Heath Druzin/Stars and Stripes) 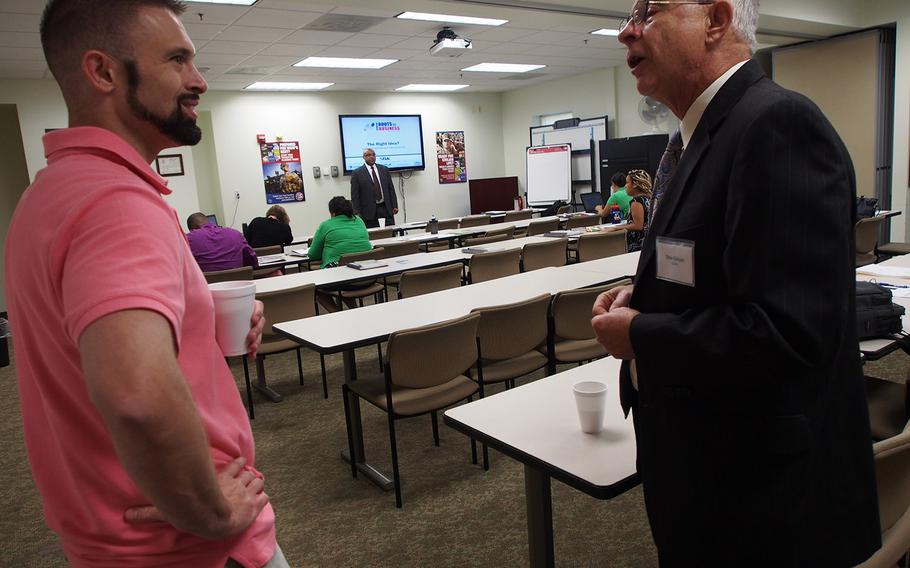 Navy veteran Nick Rudasill speaks with Stewart Gloyer, a former corporate executive who now mentors would-be entrepreuners with the SCORE group, during a Boots to Business session at Marine Corps Base Quantico. The program is aimed at helping troops and veterans lay the foundation for starting small businesses. (Heath Druzin/Stars and Stripes)

MARINE CORPS BASE QUANTICO, Va. — When faced with a room full of troops and veterans hoping to become entrepreneurs, James Williams likes to ask whether anyone has had someone laugh at their business idea. He gets plenty of raised hands.

Then he launches into his signature story about a group of his peers in Bridgeport, Conn., who couldn’t afford college after graduating high school. They told Williams and his friends that they planned to sell sandwiches to raise money for tuition.

“We laughed at them,” he said. “Fast forward to today -- they’re called Subway.”

Williams, lead economic development specialist for the Richmond (Va.) District Office of the U.S. Small Business Administration, was speaking last week as part of a two-day entrepreneurship boot camp called “Boots to Business,” which gives separating troops and veterans an introduction to starting a business.

The program is available on 165 military installations worldwide and has trained more than 25,000 troops and veterans, according to the U.S. Small Business Administration, which oversees it.

While veterans account for about 7 percent of the population, a survey released Tuesday by the U.S. Census Bureau showed that there are more than 2.5 million veteran-owned businesses in the country, employing more than 5.5 million people and accounting for about 9 percent of all businesses.

“Boots to Business” is part of a push to better prepare troops for life after the military and improve the Transition Assistance Program, the target of many a veteran eye roll for its previously superficial approach to ready troops for the civilian world. Formerly aimed only at troops close to separation, the program was recently opened to all veterans and troops, regardless of how much time they have left in the service.

Those who go through “Boots to Business” have the option of signing up for an eight-week online course run by Syracuse University’s Institute for Veterans and Military Families.

Richmond District Small Business Administration spokesman Matthew Nowak, who has been in classes across Virginia, said “Boots to Business” draws troops with interests that are all over the map.

“We even had a lieutenant colonel who wanted to grow weed in Colorado,” he said.

Life outside the bubble The recent Quantico class was a mixed bag of veterans, troops about to get out and those who still had a year or more before separation. Their business ideas included urban agriculture, security systems and beer brewing.

Some had started businesses, some were getting started and others were still dreaming.

Navy Lt. Maria DeCristoforo, 31, is more than a year from leaving active duty but wants to get started on her plans to open a nano-brewery, which is a very small-scale craft brewery.

“As much as I would like to start a nano-brewery tomorrow, I think starting a nano-brewery and separating at the same time is an unnecessarily stressful situation,” she said during Williams’ class.

Marine Sgt. Timmion Banton, 28, was also there. Also more than a year from separating, he hopes to open a restaurant featuring the food of his native Jamaica and says after leading a structured military life, the freedom of entrepreneurship appeals to him.

“It’s the flexibility, knowing that I’m not working for anyone, that I’m my own boss,” he said.

Williams said that the structure and discipline troops learn while in the armed forces serves them well in business, but that there’s often an adjustment to leaving the military bubble, with its free health care, readily available services and housing stipends.

“One of the big hurdles is becoming acclimated to civilian life again,” he said. “They have been in a protected kind of life, separated from the general population -- some of them have separation anxiety.”

Reality check “Boots to Business” is meant to be a reality check about the very difficult road ahead for anyone starting a business, Williams said.

“What we’re really looking to do is give them a vehicle by which they can think about, ‘What is the feasibility of my dream?’ ” he said. “In the end, if you decide, ‘This isn’t for me,’ that’s still a success.”

One of the program’s graduates, Andrea Currie, is about a year into the Virginia oyster farming business she runs with her husband, Ethan Currie. She says 32 years in the Coast Guard gave her many skills, but sales was not one of them.

“The military doesn’t prepare you to market, and it’s not really preparation for the corporate world -- it’s a whole different world,” she said. “Boots to Business” did a great job of addressing reality. “They also work very hard to connect and hook you up with other people who can help.”