'As rural as you can get': Montana VA flies coronavirus vaccine to eager veterans 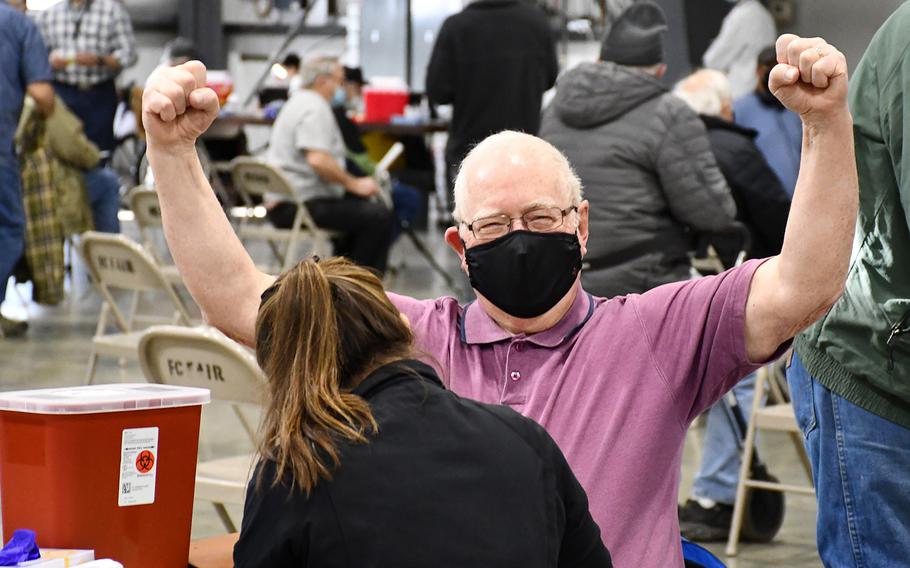 Buy Photo
Vietnam War veteran Ben Bruso, 77, throws his fists up in celebration before receiving his second dose of the Moderna coronavirus vaccine on Tuesday, March 2, 2021. The Department of Veterans Affairs vaccinated 529 veterans at the event, which was held at the Flathead County Fairgrounds in Kalispell, Montana. (Nikki Wentling/Stars and Stripes)

KALISPELL, Mont. – Before sunrise Tuesday, the red lights of a small, fixed-wing airplane blinked in the sky against the dark silhouette of the Northern Rocky Mountains, heading to Glacier Park International Airport in northwest Montana.

The private charter plane landed, taxied and came to a stop. Stairs were dropped and five health care workers piled out. The pilot unloaded a cooler and handed it off to nurse Todd Weber, who had been monitoring its internal temperature during the hourlong flight from Helena to ensure it didn’t get too warm.

Inside were 52 vials of the Moderna coronavirus vaccine.

While the other health care workers climbed into a shuttle van, Weber and a driver escorted the cooler in a separate vehicle to the Flathead County Fairgrounds in Kalispell, Montana. Pharmacists would then begin the process of extracting doses for veterans eager to receive them.

That makes them prime targets for the coronavirus, with limited ways to get a vaccine.

Kalispell, with a population of about 23,000, is the metropolitan center of Flathead County, which shares a border with Canada. About 4,800 veterans travel from around the area to receive care at the Kalispell VA Clinic. It’s about a four-hour drive along the Rocky Mountain Front to the nearest VA hospital in Helena, if the road conditions are good.

The Kalispell delivery was part of a vaccination program started by the VA to inoculate veterans in highly rural places. On Tuesday, the Montana VA Health Care System vaccinated 529 veterans there, most over age 75.

The event was Montana’s 34th vaccination clinic at 11 sites since January. The VA has flown doses into two other highly rural communities in the state – Havre and Lewistown – and is planning to deliver doses by plane for another clinic in Glasgow this month.

Before the first veterans were vaccinated Tuesday morning, Dr. Judy Hayman, executive director of the Montana VA Health Care System, gathered the staff for introductions and a short speech.

“I really can’t thank you enough. This takes lots of staff and lots of logistical, behind-the-scenes efforts,” she said. “We’re getting to really, really refine this whole process.”

The massive trade center building at the Flathead County Fairgrounds in Kalispell is typically used for large banquets and exhibitions. A sign out front advertised the annual gold, gem and mineral showcase later this month.

But Tuesday, half of the building remained unused. In one quadrant, metal folding chairs were carefully spaced six feet apart and surrounded by seven tables, where 14 nurses administered vaccinations. There was a table for veterans to sign in, and another with medical information about the coronavirus vaccine.

On one side, pharmacists C.J. Ludwig and Chris Elizagaray extracted hundreds of doses of the vaccine – an hourslong process – from the 52 vials that had been carefully transported to Kalispell. Because of extra fluid that Moderna put in some of the vials, the pharmacists were able to extract 29 additional doses from 50 vials. They left two untapped vials in cold storage to be used by another clinic in the state.

“We try to be careful and get every drop out to get as may vaccines for people as we can,” Elizagaray said as he used a syringe to draw the vaccine out of a vial.

In the back, more chairs provided a makeshift waiting area. After receiving their vaccines, veterans waited under the supervision of physicians in case they experienced negative reactions. On Tuesday, none did.

Vietnam War veteran Russell Miller, 77, signed in and waited in one of the metal chairs until his number was called by Weber, who after transporting the vaccines earlier that morning was now administering them. Miller winked as Weber stuck the syringe into his left shoulder. Then, he thanked the nurse. On his way toward the waiting area, he thanked every health care worker he saw.

“They’re taking care of us,” Miller said. “It’s above and beyond.”

Miller, who lives in the unincorporated community of Bigfork about 20 miles from Kalispell, said the last year had been a lonely one.

“I’ve been very isolated. It hurts,” he said. “I haven’t been even going to church, and I love my church.”

Several minutes after receiving his vaccine, Robert Phillip, a fellow veteran who attends the same church as Miller, clapped him on the back and said a loud hello. The two sat and talked in the waiting area well past the time they were told they could leave.

When it was his turn to receive the vaccine, 77-year-old Ben Bruso, also a Vietnam War veteran, sat in front of his nurse, Olivia Hennell, and threw both fists into the air in celebration. When he had received his shot, he happily unwrapped a sucker that Hennell had given him.

While getting vaccinated, Bruso said he was thinking about traveling with his wife in their fifth-wheel RV to visit their grandchildren in Massachusetts, Florida and Colorado. It’s been a year since they’ve traveled anywhere or seen family, he said.

Most veterans at the clinic Tuesday – including Miller and Bruso – received their second dose of the coronavirus vaccine. It was the Montana VA’s second plane delivery and vaccination clinic in Kalispell. The department administered first doses to 422 veterans there Feb. 3.

On Tuesday, just over 100 veterans received their first shots. Air Force veteran Maureen Stanaway, 73, was in that group. Stanaway, a nurse for 35 years, said she’s been lonely during the pandemic. She stays in her home, only going out every two weeks for groceries.

After receiving her shot, she said she felt great. She was looking forward to going shopping and to the movie theater again and to experience the feeling of being unafraid around other people – eventually.

“It feels wonderful,” Stanaway said. “Even in Kalispell, it’s crowded with people who want the vaccines. They want to get back to normal. A year into this thing, we’ve finally got it figured out.”

C.J. Rolphe and Teresa Petersen didn’t know each other before they met Tuesday at the vaccination clinic. They saw each other, introduced themselves and said they felt an instant camaraderie as female Air Force veterans. After getting their shots, they embraced in celebration, their big smiles discernable even under their masks.

For some veterans – in Kalispell and at the other rural clinics – the vaccination events have inadvertently offered a chance for veterans to talk to friends and acquaintances they haven’t seen in person for a year, Hayman said.

There was an anxious, excited energy that filled the large room Tuesday, both from veterans and the VA employees who had traveled from multiple locations in Montana to help with the clinic. Some said it felt like the beginning of the end of the pandemic.

“Have you felt it? You can’t capture in words what it’s like,” Hayman said. “I wish you could bottle it.”

Richard Stone, acting undersecretary for health at the VA, has testified to Congress that vaccinating veterans in rural places was going to be a “tough, herculean” task for the department, especially given the strict storage requirements for the vaccines developed by Pfizer and Moderna. Both vaccines also require each recipient to get two doses.

When the Food and Drug Administration approved the vaccines for emergency use in December, Stone asked Hayman to create a rural vaccination program in her state.

“When we got word that we would be getting the vaccines, he was concerned about the storage and transportation requirements and about rural and highly rural states,” Hayman said. “Of course, Montana is about as rural as you can get, not to mention we’re a Rocky Mountain state and the winter weather can be challenging. He said, ‘Build this. Go for it.’”

For plane deliveries, the Montana VA system uses the Moderna vaccine, which has the less stringent requirements of the two. Vials must be stored frozen between -13 and 5 degrees. Then, up to 30 days before their use, they can be kept at standard refrigerator temperatures of between 36 and 46 degrees.

Three locations in Montana can freeze the vials: Fort Harrison, Billings and Miles City. The VA chartered planes to deliver the vaccines from those locations to areas that are difficult to reach by vehicle or would take too long to transport.

The Montana VA awarded a $67,000, yearlong contract to Exec Air Montana Inc. in February to serve as its vaccine air charter.

More than 8,500 VA patients in Montana have received at least one dose of the coronavirus vaccine. In total, the system treats 47,000 veterans across the state.

Democrat Jon Tester represents Montana in the U.S. Senate and has advocated for his state to receive more vaccines. He pushed Stone to have the VA get more doses to Montana.

“This new batch of vaccines is great news for Kalispell, where they’ll help protect more veterans and staff from COVID-19,” Tester said in a statement. “I'll continue to hold the administration accountable to getting more vaccines to all Montanans—no matter who they are or where they live—so that we can slow the spread of this virus and get folks back to work.”

The Alaska VA flew in doses for veterans in Kodiak, and VA systems in Idaho and Kansas are considering the use of chartered flights for distributing vaccines to highly rural areas of their states.

Getting vaccines to rural places may soon get easier. The FDA just approved another coronavirus vaccine for emergency use: the one-shot Johnson & Johnson vaccine. The VA announced Thursday it had received an initial 71,400 doses.

Hayman was notified that the Montana VA would receive a portion of those doses. She predicted that rural distribution would become easier with the availability of the new vaccine. In addition to being only one shot instead of two, the Johnson & Johnson vaccine can be stored at regular refrigeration temperatures for up to three months.

It remained uncertain how the VA might plan to distribute the new vaccine.

“What does this mean for rural sites? Can we fly it up next time we come, leave it on site, and then have it available? We have to figure out logistics,” Hayman said. “It’s obviously going to make it easier for us to get it out in remote areas.”