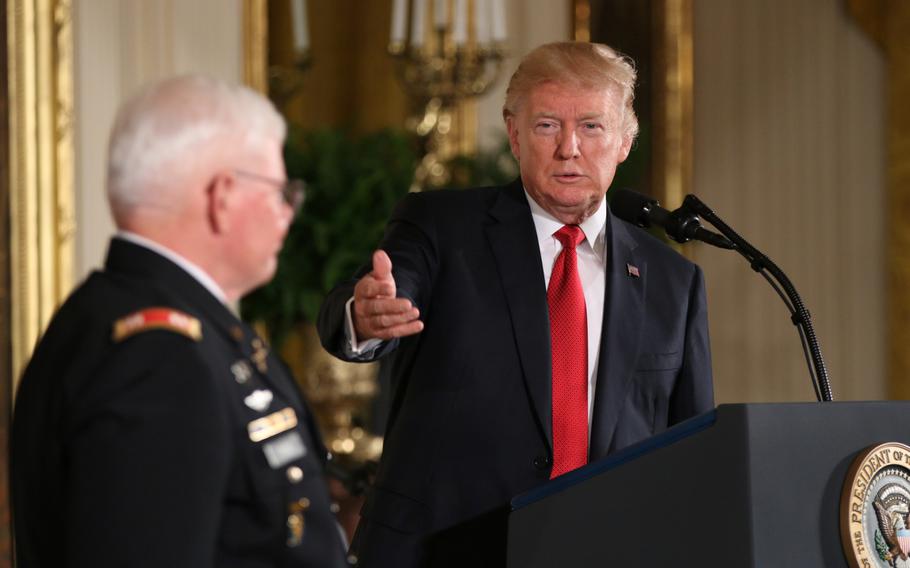 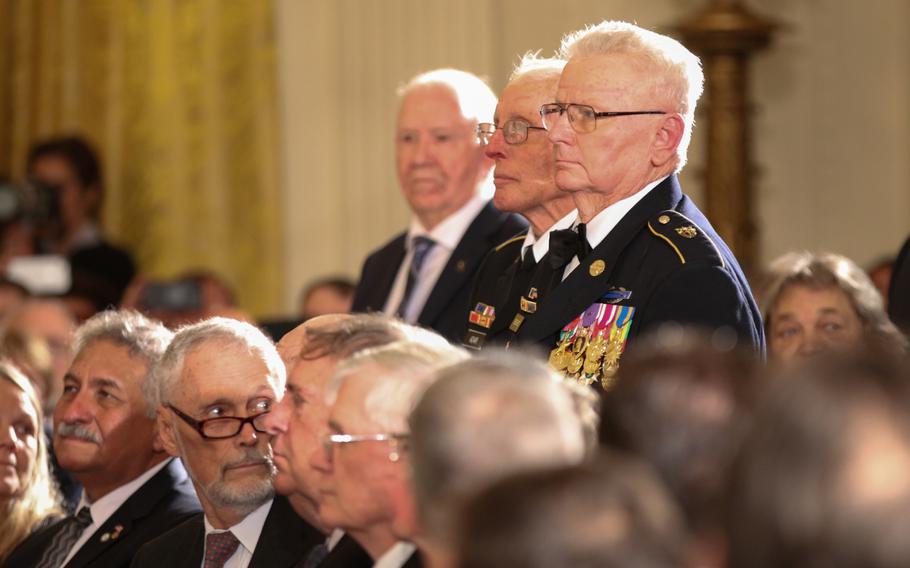 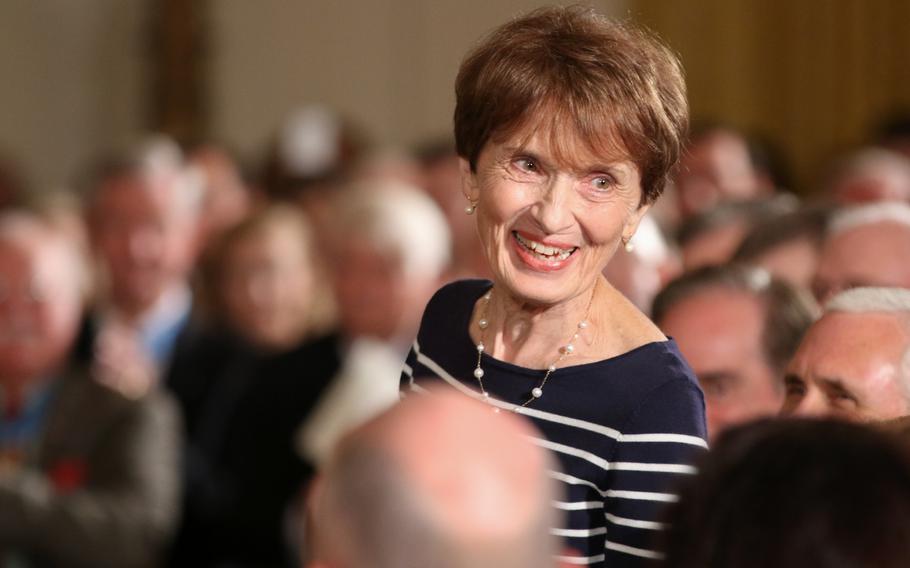 Buy Photo
Margaret Rose stands and greets the crowd during the Medal of Honor presentation for her husband, retired Army Capt. Gary M. Rose, at the White House on Oct. 23, 2017. (Michael S. Darnell/Stars and Stripes) 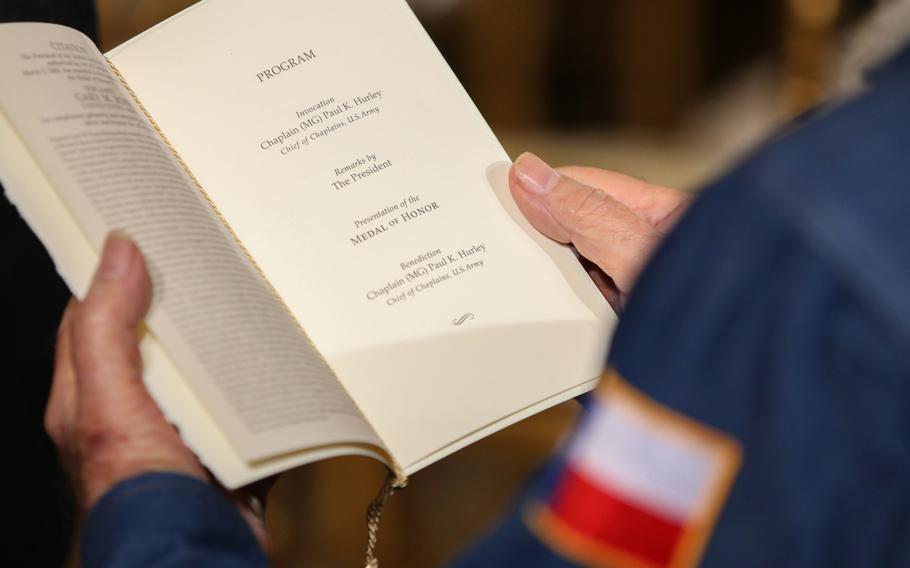 Buy Photo
An attendee reads the program for the presentation of retired Army Capt. Gary M. Rose's Medal of Honor at the White House on Oct. 23, 2017. (Michael S. Darnell/Stars and Stripes) 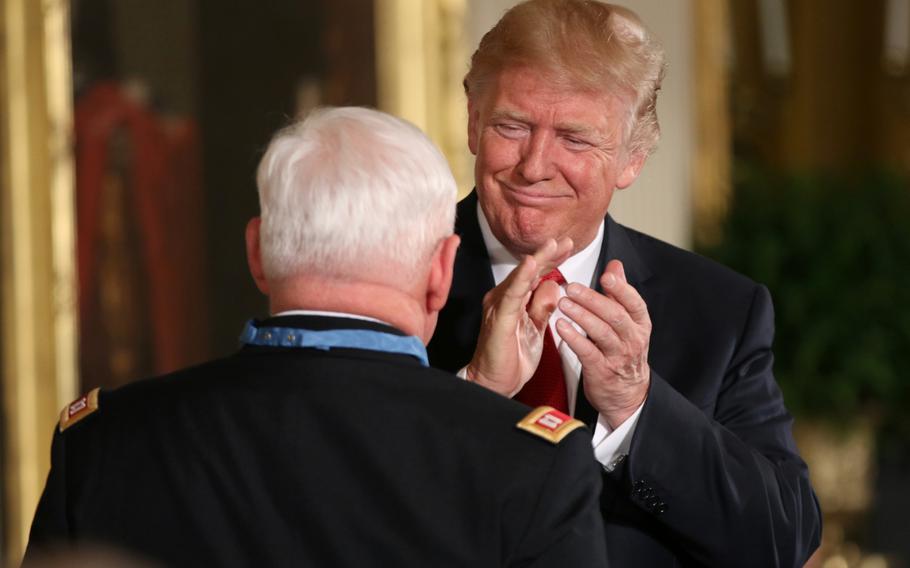 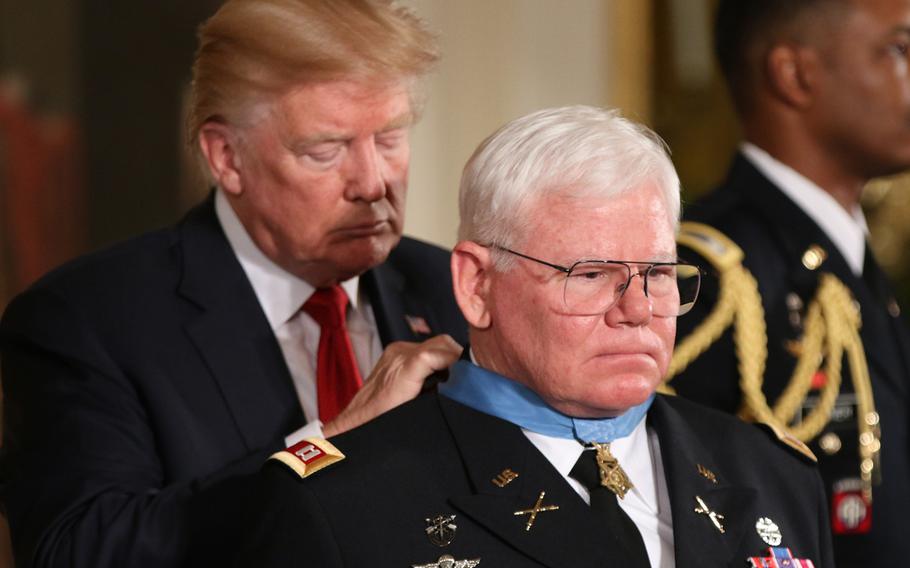 On Monday, President Donald Trump presented Rose with the Medal of Honor during a White House ceremony. A beaming Rose stood in the East Room surrounded by a packed room filled with White House officials and staff, previous Medal of Honor recipients and 10 comrades from his heroic four-day mission to Laos.

The effort comes more than 47 years after the mission, which was known as Operation Tailwind.

“Mike, this is some serious stuff,” Trump told Rose while recounting the Operation Tailwind story. “This is not a good four days.”

Rose was the only medic among 16 Green Berets and 120 Vietnamese tribal fighters known as Montagnards traveling in the covert unit in September 1970. The unit, known as the Military Assistance Command Studies and Observations Group, or MACSOG, was dropped in the Laotian jungle Sept. 11.

As they moved into enemy territory to a North Vietnamese encampment, they almost immediately took heavy fire with multiple casualties. In several cases, Rose used his own body as a human shield to protect members of his unit, even as he was wounded and continued to treat others.

“Mike valiantly fought for the life of his own comrades, even if it meant the end of his own life,” Trump said ahead of awarding Rose with the Medal of Honor. “Your will to endure, your love for your fellow soldier, your devotion to your country, inspires us all.”

In the end, every soldier was wounded, three Montagnards were killed and three helicopters crashed during the Operation Tailwind. Rose suffered wounds from bullets and rockets as well as his own helicopter crash during the mission.

“My focus was to take care of the guys who were hurt,” Rose recalled during an appearance at the Pentagon on Friday ahead of Monday’s ceremony. “You just got to do your job and keep moving down the road.”

For nearly three decades, Rose told no one about the harrowing four-day covert mission.

Rose, then a sergeant and Special Forces medic, saved more than 100 lives, including a Marine crewman shot in the neck as the helicopter they rode in dropped from the sky, according to one of his award citations.

Still, Rose told no one until the mission was declassified in the late 1990s.

“Basically the unit did not exist,” Rose recalled Friday. “And was not acknowledged for almost 30 years.”

Today, Rose, 70, shares his story somewhat reluctantly. The members who were on the ground with Rose in Laos, along with family and friends, joined him Monday.

“I wish it was still secret,” a modest Rose joked Friday. “I’m not used to the notoriety.”

Rose, who was a Green Beret, was given the Distinguished Service Cross, the nation’s second highest medal for valor, four months after the mission in 1971. Monday’s Medal of Honor is considered an upgrade of that award.

On Friday, Rose reiterated the medal will belong to his MACSOG unit and others who fought at that time, and it recognizes the efforts of the troops who did and didn’t make it back from the mission.

“This medal, I consider a collective medal for all of us who fought on the ground, in the Air Force and the Marines on Operation Tailwind,” Rose said. “In a greater sense, it also honors the Special Forces during this time frame.”

Rose retired from the Army in 1987 and worked as an instructional designer in the private sector.

He’s now a grandfather, and his grandchildren, along with his wife and children, attended Monday’s ceremony.

“From my children, I get the idea they are kind of pretty proud of their dad,” Rose said Friday.

Congressional action was required to allow Rose to receive the Medal of Honor since it came more than five years after the heroic actions. Congress authorized a waiver tucked into the National Defense Authorization Act that was passed earlier this year.

Rose, who lives in Alabama, said his efforts were helped along by a long list of friends, Pentagon officials and legislators.

Rose grew up southern California and enlisted in the Army in 1967. He has also received three Purple Hearts.

Rose’s award will mark the second time Trump has presented the Medal of Honor. James McCloughan, also a Vietnam War medic, received the award on July 31.