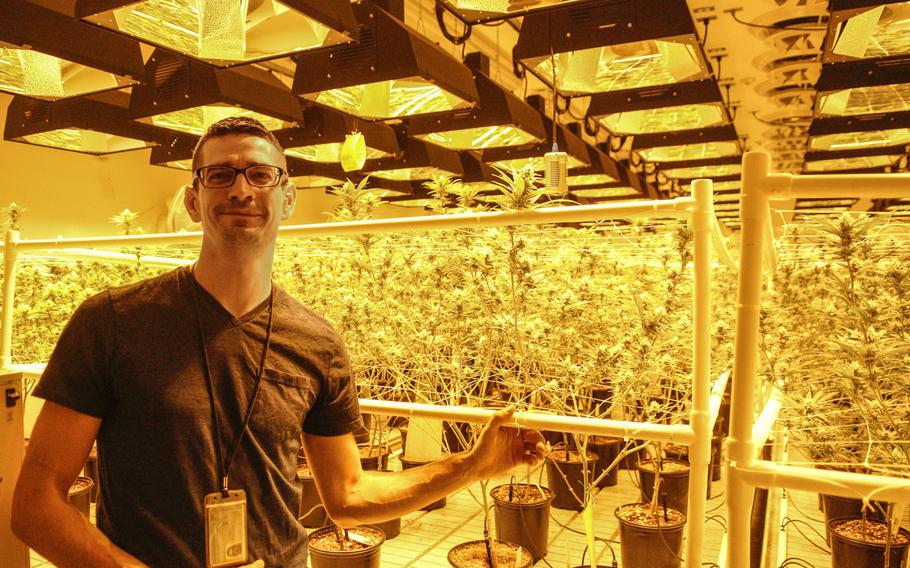 Buy Photo
Ryan Reese, a U.S. Air Force veteran, helped to establish a marijuana cultivation facility in Phoenix over the past year and recently worked as its CEO. Reese retired as a mechanic from Beale Air Force Base and uses marijuana to treat chronic pain. (Nikki Wentling/Stars and Stripes)

PHOENIX — Inside his large corner office at the marijuana cultivation facility, U.S. Air Force veteran Ryan Reese kept a model U-2 on his desk and a copy of Time magazine – a special edition about the booming business of pot.

In the past two years, Reese has traded one world for the other. The 38-year-old father of three retired as a flight chief from Beale Air Force Base in August 2015. His 18-year military service included time in Afghanistan and working as a mechanic on U-2s, high-altitude reconnaissance aircraft.

By the time he left the military, his list of ailments was long. He had work done on both knees and one shoulder, and he had back pain. He’d be on a rotation of prescription opiates for about five years. The drugs, and a loss of purpose he felt after exiting the military, led to anxiety and hyper-aggression.

Before he considered marijuana as a treatment option, he had stopped going to doctors altogether. Then, he stopped going anywhere.

“I was a recluse,” Reese said. “I wouldn’t go to the grocery store, birthday parties. I said, ‘I need help.’ That was the hardest thing. Being in the military so long, it was all about resiliency.”

He went through an in-patient program for opioid abuse and talked to mental health care providers. In Arizona, where medical marijuana has been legal since 2010, Reese had another choice. He uses high-CBD, low-THC oil a couple of times each week. THC is the compound that gets users high. High-CBD weed is used mostly by those seeking pain relief.

He’s working to share the choice with others – especially veterans.

Opioid addiction is driving accidental deaths due to overdose in the United States, and overdoses are at an all-time high, according to the American Society of Addiction Medicine. VA data from 2014 shows veterans are twice as likely to die from an accidental overdose than non-veterans.

Reese said he’s witnessed the problem in the veterans community in Phoenix, home of Luke Air Force Base. Last month, he was attempting to find and intervene with a military buddy he knew had taken opioids and become addicted to heroin.

“We chose to serve; give us the choice to medicate with marijuana,” Reese said. “I think that veterans, given the current state of affairs, deserve a choice.”

For the past year, Reese has helped establish a cultivation facility in Phoenix, where last month roomfuls of marijuana grew behind doors secured with biometric fingerprint readers. Plant scientists in blue scrubs went up and down the hallways, checking on the plants that were in various stages of growth – from seedlings to those about 3 feet tall and nearly ready for harvesting.

He thinks running a solid operation can only help legitimize the medical marijuana industry.

“I want to do something different here than just grow some medical marijuana and make money for investors,” Reese said. “I want to be able to give Arizona something even more. I want to give people on the fence trust and confidence that this is a viable option.”

Reese has participated in lobbying days with the National Cannabis Industry Association and attended cannabis conferences. He’s a Republican, he said, quipping that he would fight just as hard to keep his cannabis as he would his guns.

He’d like to quash the stigma, which he thinks especially pervades the veterans community, in the 29 states where marijuana is legal, and see it expand to the states where it’s not.

“Talking about it spreads the message and makes more people feel welcome,” Reese said. “It gives us that collective voice.”

In late May, Reese announced he was stepping down as chief executive officer for the cultivation facility because of health problems. He said he was struggling with thyroid and other issues that he believes are related to burn-pit exposure in Afghanistan.

His level of future involvement with the facility – and with advocating for medical marijuana – is uncertain.