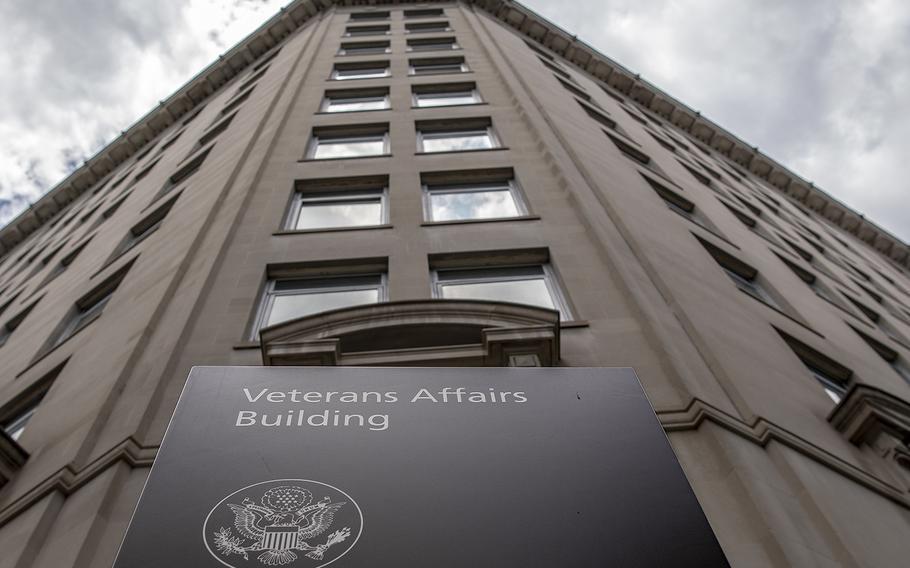 The Department of Veterans Affairs building in Washington, D.C., is shown in this undated file photo. (Carlos Bongioanni/Stars and Stripes)

"This is an extremely important effort to solve a decades-long problem and is essential that VA get it right for the health and safety of veterans," said Sen. Martin Heinrich, D-N.M., chairman of the Senate Appropriations Committee’s subpanel on military construction, veterans affairs, and related agencies. "In addition, this is a major investment, and VA has a responsibility to taxpayers to ensure the system works, and its success can be measured."

The VA originally signed a $10 billion contract with the company Cerner in May 2018 to overhaul the agency's health records system and make it compatible with the Defense Department’s system. However, the cost of the project later increased to about $16 billion.

So far, the new records system has been launched at five of the VA’s 166 health care facilities. In some cases, additional launches at some facilities have been postponed because of ongoing problems with records system, along with delays caused by the impact of the coronavirus pandemic.

"I am concerned," said Sen. Jon Tester, D-Mont., chairman of the Senate Committee on Veterans’ Affairs. "We're into this damn near five years and we haven't done a damn thing. I mean, we've implemented, and it's been a train wreck in my opinion."

The VA had originally scheduled to launch the new records system in July at the Boise VA Medical Center but moved it to 2023 after the VA inspector general released a report that revealed the system caused harm to 149 VA patients.

"Just one vet harmed is one vet too many and, right now, the bottom line is that the Cerner system is not delivering for veterans in the ways that it should," VA Deputy Secretary Donald Remy said the hearing. "It needs major improvements.”

Shereef Elnahal, VA's undersecretary for health, said he visited the Columbus VA Medical Center in Ohio and saw firsthand the issues clinicians and providers faced using the records system. Among the most concerning problems that he said he saw included putting in orders for lab work or tests.

"They were not confident in many cases, and in many clinical settings, that those orders were actually getting where they needed to go on behalf of their veterans," Elnahal said. "So, there was a lot of manual rework, recheck, that had to be done to meet those veterans' needs."

He also said employees told him the system was stressful to use. Leaders at the Columbus VA facility told Elnahal that some employees quit partly because of problems working within system, Elnahal said.

A review issued in July by the institute estimated the implementation of the electronic health record system would cost nearly $39 billion in 13 years. The estimate also included more than $17 billion to sustain the system.

"VA has an opportunity to manage cost drivers such as productivity loss associated with deployments [of the new system]," Rieksts said during the hearing. "As the system is rolled out to more facilities, emerging information will provide additional insights regarding risk and uncertainty in the cost estimate.”

Mike Sicilia, executive vice president for industries at Oracle, which purchased Cerner in June, told the Senate Veterans' Affairs Committee in July that he reviewed the system's issues. Oracle took over Cerner's electronic health record contract with the VA, Defense Department and the Coast Guard and established a command center led by Oracle's senior engineers.

Sicilia said Wednesday that Oracle hosted a summit with the VA, Defense Department, Federal Electronic Health Record Modernization Office, and Leidos Holdings Inc. to discuss the federal electronic health record system's performance and its issues. Sicilia said the meeting led to plans for the system and that Oracle sent a letter to the VA detailing the plans and a roadmap.

Sicilia also said Oracle is working with the VA to revamp training for employees to learn to use the electronic health records system.

"We are working on more than 40 different technical operational improvement projects for the federal enclave that we expect to lead to improved performance and greater stability," Sicilia said in his written testimony. "We have made progress already, completing four projects and expecting seven, potentially eight, more to be complete by the end of the year. As we work on these projects, we will continue to analyze the system and make other fixes as needed."