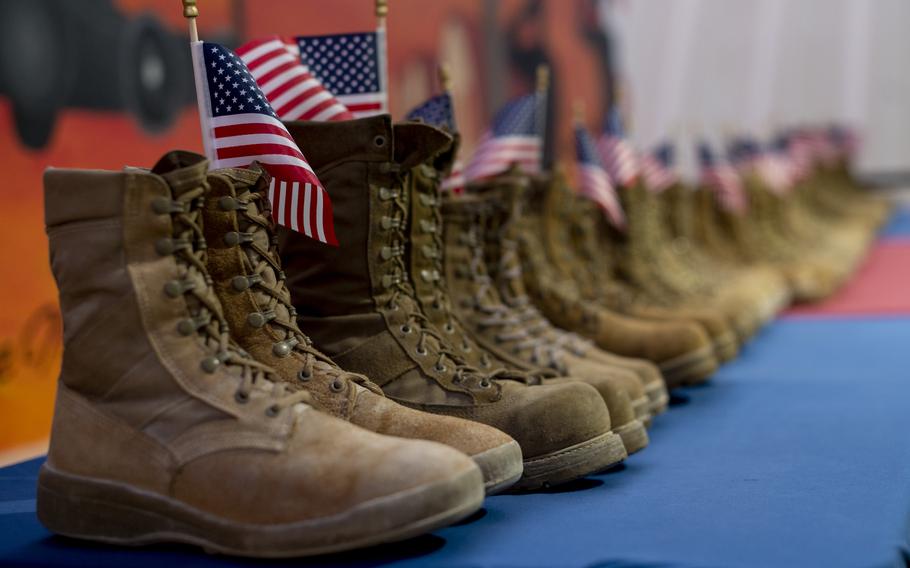 U.S. airmen from the 332nd Air Expeditionary Wing honor veterans who take their own lives, symbolized by 22 pairs of boots, Sept. 8, 2021, from an undisclosed location somewhere in Southwest Asia. (Karla Parra/U.S. Air Force)

An exhaustive study four years in the making has found nearly a 40% higher rate of veteran suicides than that reported by the Department of Veterans Affairs.

The study’s interim report, based on service records from the Defense Department and death records from eight states, examined suicides and “self-injury mortality” — or deaths classified as accidental or undetermined — in people aged 18 to 64 from 2014 to 2018.

America’s Warrior Partnership, a suicide prevention group, contracted with the University of Alabama and partnered with Duke University to gather state-provided death data and coordinate with the DOD to corroborate military affiliation. It was funded by the Bristol Myers Squibb Foundation.

The study identified a 37% greater suicide rate than reported by the VA. That was because “Operation Deep Dive,” as the study is called, worked to get specificity of the decedent’s demographics, military experience and death details.

The VA, by contrast, gets its suicide numbers reported by the county authorities where the death occurred. The study found that method failed to identify veterans about 18% of the time.

“It’s not the VA’s fault. The issue is the counties,” said Jim Lorraine, an Air Force veteran and president of America’s Warrior Partnership.

The VA did not return phone calls or an email for comment.

The states that provided death information for the study were Alabama, Florida, Maine, Massachusetts, Michigan, Minnesota, Montana and Oregon.

If the eight states represented a national rate, study authors said, approximately 24 veterans die each day by suicide, as determined by a coroner or medical examiner, compared to the VA’s average of 17.7 veteran suicides per day.

In addition, some 20 former service members die each day by self-injury mortality — listed as accidents or an undetermined cause of death. More than 80% of those were overdose deaths, Lorraine said.

The study identified that veterans most at risk of suicide were those who served for less than three years, had been demoted, and lived alone in a suburban or rural area.

The study will continue for another four years, Lorraine said, with plans to get data from more states and drill down into the specifics of each suicide with the ultimate goal of creating prevention tools, Lorraine said.

“We’ve got to get those numbers down,” Lorraine said.