Biden praises Wounded Warriors as the 'spine of America' 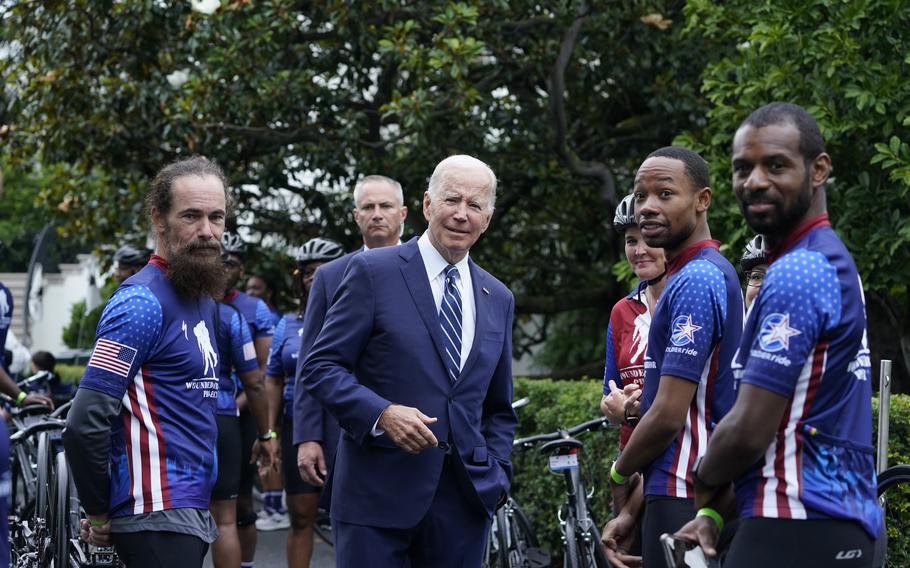 President Joe Biden talks to riders at the White House in Washington, Thursday, June 23, 2022, during an event to welcome wounded warriors, their caregivers and families to the White House as part of the annual Soldier Ride to recognize the service, sacrifice, and recovery journey for wounded, ill, and injured service members and veterans. (Susan Walsh/AP)

WASHINGTON — President Joe Biden on Thursday welcomed members of Wounded Warriors Project to the White House for the annual solider ride, praising the current and former military service members as the "spine of America."

More than two dozen veteran and active duty troops rode two laps around the South Lawn as part of the multi-day cycling event. The tradition of the soldier ride at the White House began in 2008.

"You are the best that America has to offer," Biden said. "You embody the soul and spirit of the nation."

The Wounded Warrior Project was founded in 2003 and assists veterans as well as families and caregivers of service members who suffered a physical or mental injury or illness while serving in the military on or after Sept. 11, 2001.

First lady Jill Biden as well as Vice President Kamala Harris and her husband, Doug Emhoff, also attended Thursday's ride that went on as planned in a light rain.

The first lady thanked the veterans for their service and acknowledged that the path of "healing is not a straight line" for many of those who suffered catastrophic injuries during their service.

"There's a saying in the cycling community that some of you may know: It never gets easier, it just gets faster," she said. "I think there's a truth about recovery in that saying as well."