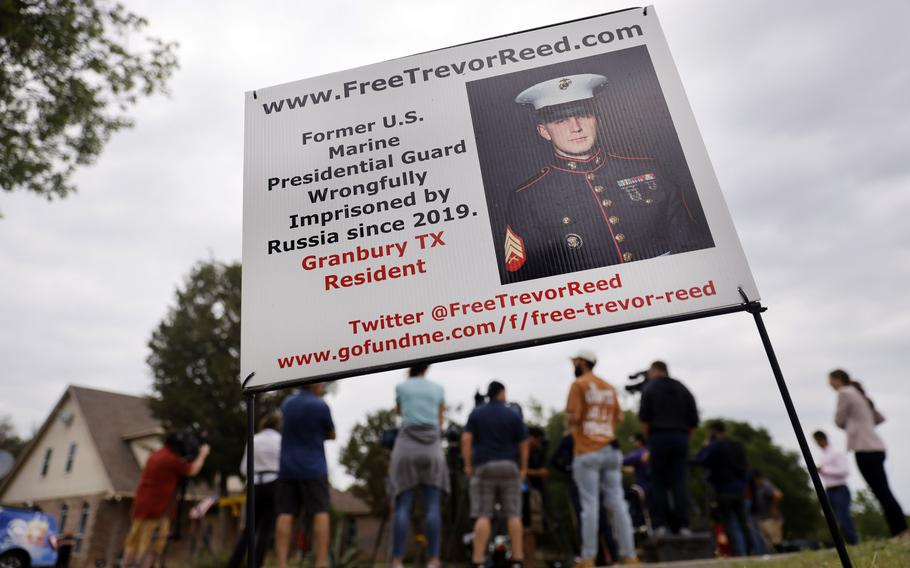 A campaign yard sign sits outside Joey and Paula Reeds Granbury, Texas, home after their son, U.S. Marine Corps veteran and Russian prisoner Trevor Reed, was released, April 27, 2022. Russia released Reed, who has been suffering from tuberculosis in squalid prisons, trading him for a Russian drug smuggler serving a long prison sentence in the U.S. (Tom Fox, Dallas Morning News/TNS)

WASHINGTON (Tribune News Service) — Marine veteran and Fort Worth, Texas, native Trevor Reed said Tuesday in an interview with CNN that in the 48 days since his release from Russian prison things have gone well — he’s gaining weight back and getting into the physical shape he was in before he was detained.

“I started almost immediately to try to get back into shape and get back into physical condition to where I was before and that’s going extremely well,” Reed said. “I’ve put on already I think about 30 pounds. Cardiovascular is improving significantly as well, so I’m excited about that.”

Reed said he’s been slowly but surely adjusting back to his life in North Texas, and has been spending time with family and friends. Though the transition hasn’t always been easy.

“You know, it’s kind of strange getting back into the groove of things and going into public places,” he said. “Just sleeping is kind of difficult at first there, but all of those things get easier over time.”

Reed has filed a petition with the United Nations in an attempt to hold Russia accountable for the poor treatment he said he received in prison. He was arrested and detained in Russia in 2019 and spent nearly three years in a Russian gulag.

“This petition is to hold Russia accountable for wrongful imprisonment, mistreatment and violations of human rights,” Reed said. “There’s a working group there at the UN who specializes in those cases. That petition includes legal documents, eyewitness accounts, and that’s what’s going to be used to prove denial of rights under international law.”

In late April, after years of lobbying from his parents, Russia released Reed in exchange for a Russian drug smuggler who spent a dozen years in U.S. prison. Reed had developed what was likely tuberculosis in the gulag, and as concern for his health mounted, President Joe Biden relented and approved the swap.

Reed said he hopes the UN petition will eventually force Russia to end its practice of detaining Americans for political purposes. He specifically mentioned Paul Whelan, the former Marine who’s been detained in Russia for three and a half years, and WNBA star Brittney Griner, who’s been held since February.

“I’ve been released already for 48 days, we need to get him out of there as well,” Reed said, referring to Whelan. “As well as Brittany. If it takes exchanging someone, we need to do that.”