Former Army Ranger fatally struck by a car in California; family says he may have been assaulted 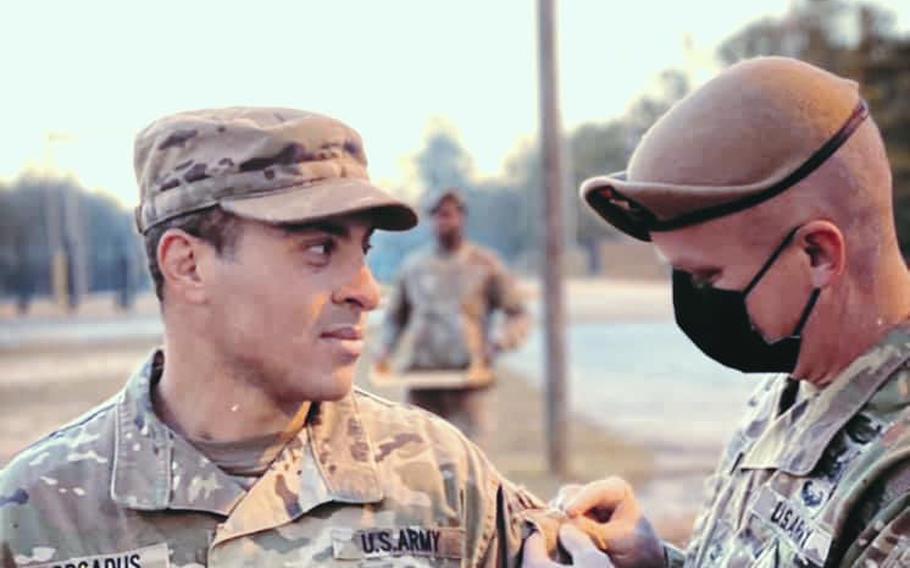 In a text message to a friend about 20 minutes before he was fatally struck by a car on Beach Boulevard in Huntington Beach, Calif., Stephen Broadus said he had been assaulted. (Facebook)

However, early on Easter Sunday, the 25-year-old who had been honorably discharged from the military just days earlier indicated he had been uncharacteristically defeated.

In a text message to a friend about 20 minutes before he was fatally struck by a car on Beach Boulevard in Huntington Beach, Calif., Broadus said he had been assaulted.

“I’m concussed,” he told the friend. “Dude, I got jumped twice.”

The puzzling text, along with several phone conversations, have convinced Broadus’ family that other factors might have contributed to his death. So they’re searching for answers about the last moments of his life.

Tammy Broadus, 23, of Huntington Beach said it doesn’t make sense that her brother, whom she described as careful and methodical, would venture into traffic.

“I think whoever jumped Stephen had been continually chasing him down,” she theorized. And she believes his presumed concussion caused him to be disoriented and walk into the street.

Broadus was walking outside of an intersection crosswalk in the northbound lanes on Beach Boulevard between Utica and Adams avenues when he was struck about 4 a.m. April 17, said Jennifer Carey, a public information officer for the Huntington Beach Police Department.

The driver of the vehicle remained at the scene, was fully cooperative with police, and is not believed to have been under the influence of drugs or alcohol, she added.

Broadus was taken by ambulance to UC Irvine Medical Center, where he underwent brain surgery but died on April 23.

Broadus, who was a captain on the Edison High School wrestling team and a defensive lineman on the West Point sprint football team, served in the Army for seven years.

He was poised to begin a new career as a software engineer for Amazon and had been in Huntington Beach for less than a day when tragedy struck.

How the night began

Broadus’ night out began at about 8:30 p.m. on April 16, when he got a ride with friends to The Bungalow, a bar in Huntington Beach’s Pacific City shopping complex, Tammy Broadus said.

She and other family members have established a timeline of Broadus’ activities through a review of security camera video footage from the bar and conversations with friends who were there.

Tammy Broadus said one friend reported that her brother, who was wearing a black sweatshirt emblazoned with “Ranger,” black pants and black sneakers, wasn’t drunk or overly intoxicated at The Bungalow.

“He was happy and just chilling with friends and was stoked to be back home,” she said, adding that by 1:09 a.m. on April 17 all of her brother’s friends had left the bar, but he remained.

Video footage shows that Broadus spoke to a group of girls inside The Bungalow at 1:47 a.m. and then stumbled and fell on his way toward the door, his sister said.

“He gets up like nothing happened, and leaves toward Pacific City. Seemed to me he was in good shape, not drunk or intoxicated,” she said. “He did not appear to be in any fights or altercations at that point we could see and did not seem angry or disgruntled.”

However, a series of conversations and texts between Broadus and a friend shows a change in his demeanor beginning with a phone call at 1:51 a.m.

“I was asking him to come to where I was staying (in Orange),” the friend told Tammy Broadus in a text. “He was arguing with someone. It sounded heated and I was trying to calm him down. I told him I was already on my way back home, and fighting and arguing with someone was a bad idea.”

The friend said Broadus called back almost immediately, saying he had stopped arguing and had walked away from the volatile situation.

“I was relieved (and) then urged him to get an Uber in a safe area and come to the address I sent him,” the friend told Tammy Broadus. “I’m pretty sure I even offered to send him an Uber.”

‘He got into a fight and lost’

In a subsequent phone call, Broadus said “he got into a fight and lost,” but seemed coherent, the friend reported.

Broadus texted the friend at 3:15 a.m, telling him he had a concussion and then again 28 minutes later, saying he had been attacked twice.

Tammy Broadus believes her brother, who had a black belt in tae kwon do, had been outnumbered by his attackers. “He was so strong and a fighter,” she said. “He could take three (people) at once.”

While an investigation is ongoing, police have been unable to find any calls for service or evidence indicating a fight or altercation involving Broadus, Carey said.

‘Best guy in the universe’

Meanwhile, Tammy Broadus is left with fond memories of her brother, who was always quick with a joke and once rescued her from an undertow at a local beach when she was 11.

“He was the best guy in the universe,” she said. “He was the most lovable, kind, strong, brave person that I know.”

Anyone with information about Broadus’ death is asked to call Huntington Beach police at 714-960-8811.