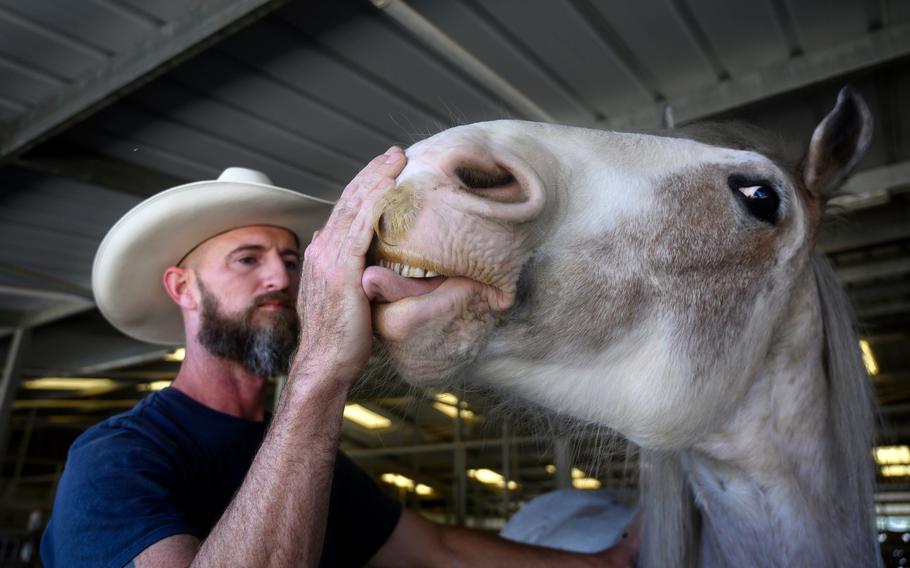 Marine veteran Paul Worley works with one of his favorite horses, Huckelberry, at Shea Therapeutic Riding Center in San Juan Capistrano, Calif., on March 22, 2022. Worley says the horse, like him, likes to work and doesn’t like to be messed with. (Mindy Schauer, The Orange County Register, SCNG/TNS)

Slowly walking around the 1,270-pound draft horse, he lifted each of the animal’s powerful legs, bringing up one hoof after the other to check for any hard bits stuck inside the soft underneath part.

The exercise has become a ritual. It’s a sort of check-in.

Trust and a calm demeanor are crucial. “It makes me mindful of how I’m doing that day,” Worley said.

A highly decorated combat Marine veteran who retired in August after more than two decades in the infantry, Worley went looking for help with readjusting to life after the military and the South Orange County Vet Center hooked him up with the Shea Center.

“Horses are a good listener if there’s something you need to get off your chest,” Worley said. “Huckleberry’s the guy I identify with the most. I get him, he gets me. We’re both stubborn and we both have a wild streak sometimes.

Worley has been a regular at the San Juan Capistrano riding center for a year. He’s one of hundreds of veterans the equine therapy program has worked with in its partnership with the vet center, a special program of the Veterans Administration. The veterans center is a place where former service members help other veterans readjust to the civilian world and coach them through their day-to-day struggles.

The Shea Center launched its veteran’s program 10 years ago, but in the past two years, its program for combat veterans with PTSD has doubled. In 2021, the center provided 3,000 hours of equine therapy to veterans, and expects an even greater growth this year.

At the very least, the Shea Center’s rustic, tranquil atmosphere helps “veterans detach from the everyday world,” said Chris Saldivar, also a Marine infantry veteran who is now a counselor at the veterans center and is Worley’s therapist.

More important, the horses are sensitive to the veterans’ tension levels and mirror that stress and anxiety back through their behavior, Saldivar said.

“For many veterans, their anger and stress levels are at a nine for many years,” Saldivar said. “Being around a horse makes veterans aware of their emotional state. As horses respond differently, it creates a coherent pathway for veterans to understand their emotional functioning.”

Up for the mission

Worley, 40, said he loved his infantry job. He joined the Marine Corps in 1999 after graduating from a small North Carolina mountain town high school.

After boot camp at Parris Island, S.C., he was all in.

“What I like about the infantry was that I was good at it,” Worley said. “Everything an infantryman does, I just got real good at it. I studied it and I made it my life.”

Worley was part of the initial U.S.-led invasion of Iraq in 2003. He fought in some of the Marines’ fiercest battles like Ramadi in 2004 and Fallujah in 2005.

Deployments took him seven times to Iraq or Afghanistan. He earned multiple commendations for bravery during combat, including the Purple Heart Medal and the Silver Star, the military’s third-highest decoration for valor during a firefight – critically wounded he refused to be medevaced and stayed with the Marines he led, ultimately saving a Marine’s life.

Each time there was a chance at deployment, Worley, who was part of units at Marine Air Ground Combat Center Twentynine Palms and Camp Pendleton, was up for the task.

“I just kept going because that’s what I signed up to do,” he said.

But as the Marine Corps drew down its troops in Afghanistan and the pace of deployments slowed, Worley’s own frenetic pace became quieter and he said he had time to think.

“You see horrible things in war,” he said. Added to that was losing the Marines he promised to bring home.

“It’s horrible seeing a young Marine die. Because you’re seeing this young kid die, but you’re (also) seeing every potential thing he could have ever done die, too,” he said. “And, over the course of 20 years, I’ve probably got my heart broken more than I should have.”

Worley said he was constantly reliving those deaths and thinking about what he could have done better.

“Then you do the one thing Marines are good at: You kill the enemy,” he said. “You look into the mirror, and you see the enemy.”

Worley looked for help while still on active duty. He realized it was time to get out, he said, but he worried about what civilian life would be like. There was no job for an infantryman.

“Some of my other friends would get out, and it wouldn’t go well,” he said, adding that six friends killed themselves in three years.

As a single father, he knew he couldn’t do that to his 13-year-old son.

“When I walked into the vet center, I felt like I had a 1,000-pound gorilla sitting on my chest,” he said. “Which is how much remorse, anger and guilt I felt over everything.”

The Shea Center, known for its therapeutic riding programs for disabled children and adults, was a perfect fit for the veterans.

Saldivar worked with Janelle Robinson, the riding center’s chief program officer, on how the horses could address the veterans’ various needs, starting by pairing each with an animal for the simple exercise of leading the horse around a pen to understand their state of mind.

“They have to keep the horse moving in a controlled manner,” Saldivar said. “Some guys who are really intense, the horse starts racing. The veteran has to go there in a relaxed posture to really present to the horse that they’re approachable, and the horse has to come to them voluntarily. It’s a very powerful experience.”

Veterans learn to interact with the giants, brushing and grooming them.

“At those times, the veterans have to be constantly aware of their emotions,” Saldivar said. “They learn to regulate their voice tones, things they can use with everyday people.

“The military trains aggression; we’re training the opposite,” Saldivar said. “Working with the horses, it gives the guys a tool to practice with in real-time.”

When Worley does his routine check of Huckleberry’s hooves, he matches his breathing to the horse’s.

“They sync their breathing,” Saldivar said, “and it helps them get into a calmer emotional state.”

In the fifth week, they are in a saddle.

“You establish yourself as a leader, but you build that bond with the horse as you go through these sets of exercises,” Worley said. “There’s this very clear moment when you feel that horse relax and release that control and it’s pretty amazing.”

“We see significant improvement with guys being able to connect with much happier feelings,” Saldivar said. “They communicate better with their families and at work.”

Being with the horses was so rewarding for Worley, he offered to volunteer even before transitioning out of the Marines.

“I’d go work the barn or lead horses around,” he said.

“When they found out I was getting out of the Marine Corps, they offered me a job,” he said. At first, he figured it was something to do until he hashed out a future career. “Four months later, they asked me if I wanted to be a barn manager.”

Now, each time his truck pulls up to the barn, Huckleberry is there whinnying in his stall, his ears perked and anxious for Worley to check in with him.

“When I sit on a horse, I just feel like I’m a kid again,” Worley said. “When you’re a kid … the world hasn’t gotten ugly yet. It’s great to be able to revisit that.

“When you touch the horse, it’s just beautiful,” he said. “One of those horses could kill you in a second if they wanted to, but it’s not its nature. Its nature is to be gentle.

“I think I’m learning to become more of a gentle person. I’m getting over the anger part slowly, day by day, and the horses are helping.”