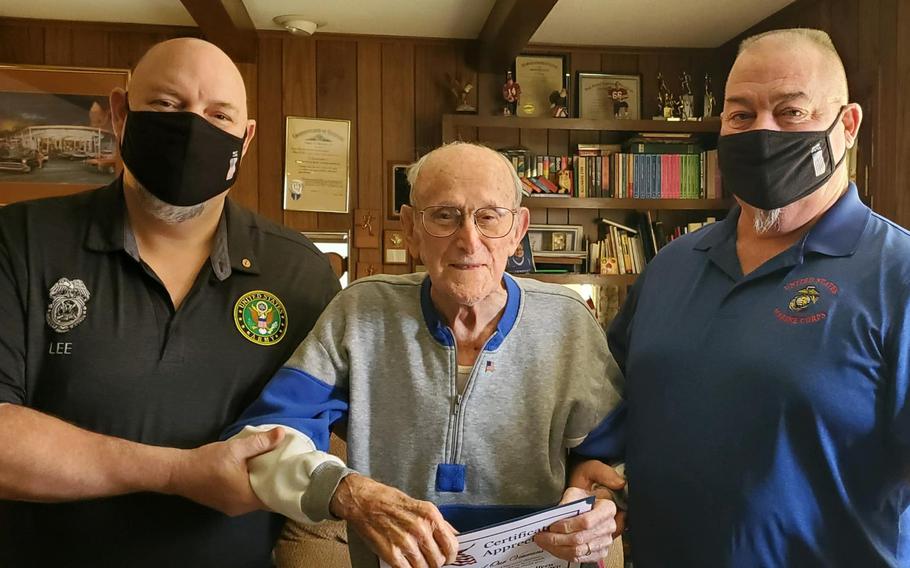 OWENSBORO, Ky. (Tribune News Service) — In 1922, Warren G. Harding was president of the United States, the average annual income was $3,143 and a gallon of gas cost 25 cents. It was also the year Owensboro resident and World War II veteran Clarence Redfern was born.

A native of Island, Redfern will celebrate his 100th birthday on Jan. 19.

Serving as a corporal throughout the war, Redfern said the experiences taught him some lessons that he has remembered throughout his life.

"Well, what stands out is the way you had to live," he said. "I was all through Germany, went through France, Belgium, Holland."

Redfern said he operated a heavy artillery gun during the war. He remembers having to sleep in foxholes that usually had water in them.

"It will make you learn what life is all about, for one thing," Redfern said. "You didn't know whether you were going to be here the next day. I never had too bad of luck."

After returning home from the war, Redfern was dropped off in Sacramento, Ky. He hitchhiked the roughly 5 miles to his home.

He then went to barber school and owned a barber shop at several locations in Owensboro before cutting back to two days a week while also inspecting barbershops. Redfern did not completely retire until he was 85 years old.

"I enjoyed it, I'll put it that way," said Redfern about his barbering career. "I cut my own hair; that can probably tell you something."

Redfern also married and started a family after returning from the war.

Redfern said he is not aware of anyone else in his family that has matched his longevity, as he looks toward his 100th year.

Jessica Powell, Redfern's caregiver who works with him five days a week, said she has learned that age doesn't always define ability.

While Redfern played music for several years with a few fellow veterans, he has had to hang up his guitar. But a few harmonicas can still be found on the side table next to his chair.

"I sold my guitar and quit here a while back because I got to where I couldn't even make a chord anymore and can't get out; these old knees have me stopped," he said. "If I go anywhere, somebody has to take me."

Redfern said he has always loved the harmonica, and at one time it was a favorite Christmas gift to receive.

"I learned to play when I was a kid," he said. "I remember I was crazy about them, and my dad would get me one every Christmas. They cost a quarter, and they cost about $30 now."

As for the secret to his longevity, Redfern attributes it partly to his belief in God.

"I can tell you one little thing here, about 50 years ago I started tithing, and I am still doing it," he said, "and I think probably that has one reason why the good Lord let me live this long."

As for his service during World War II, Redfern said that while it was not the easiest thing he's ever done, he would do it again.

In celebration of his 100th birthday, V.F.W. Post 696 will be conducting a drive-by celebration in front of Redfern's home on Jan. 19.