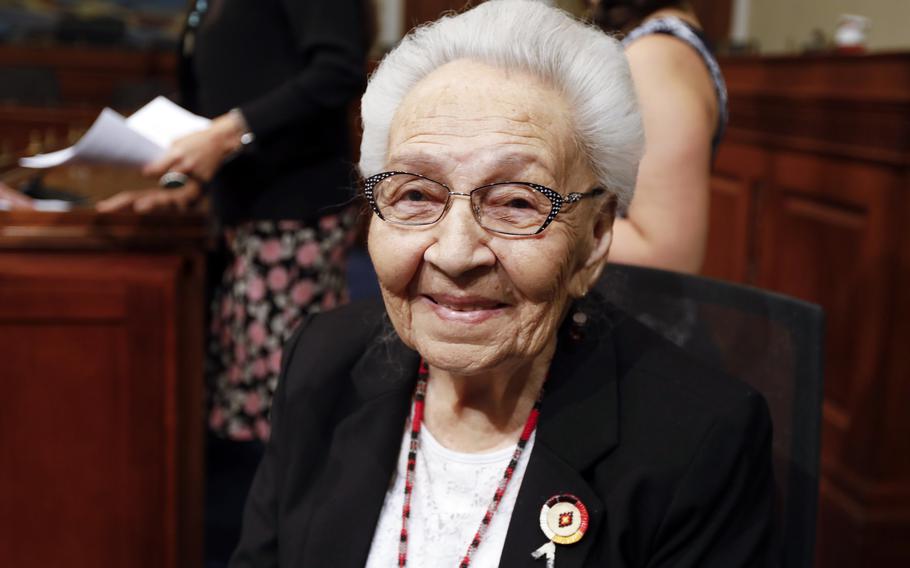 Marcella LeBeau attends an event on Capitol Hill in Washington on June 25, 2019. LeBeau, an Army nurse who was honored for her service during World War II and leadership in the Cheyenne River Sioux Tribe, has died Nov. 21, 2021, in Eagle Butte, S.D., at the age of 102. (Kali Robinson/AP)

SIOUX FALLS, S.D. — Marcella Rose LeBeau, an Army nurse who was honored for her service during World War II and leadership in the Cheyenne River Sioux Tribe, has died. She was 102.

Family members said she "passed on to journey to the next world" late Sunday in Eagle Butte, South Dakota after experiencing problems with her digestive system and losing her appetite. LeBeau had remained active all of her life and earlier this month traveled to Oklahoma for a ceremony honoring her induction into the National Native American Hall of Fame.

Her daughter, Gerri Lebeau, said the matriarch of her family demonstrated fortitude, as well as an ability to seek healing, as she overcame the abuses she faced at an Indian boarding school during her youth. She went on to treat frontline soldiers as an Army nurse in Europe during the Allied invasion of Normandy. After returning home, she became an outspoken advocate for health in the Cheyenne River Sioux Tribe.

"She was the foundation of our family," said her grandson Ryman LeBeau. "She had a lifetime of good things that she had accomplished."

Lebeau was born in 1919 and grew up in Promise, South Dakota, as a member of the Cheyenne River Sioux Tribe. Her mother died when she was 10 years old, and her grandmother gave her the name Wigmunke' Waste Win', or Pretty Rainbow Woman.

But LeBeau grew up at a time when the government was attempting to eradicate her culture — while her grandmother only spoke the Lakota language, she could be punished for speaking it at the boarding school she attended.

LeBeau's father had instilled the importance of education, and that led her to become a registered nurse, Gerri LeBeau said. At 24 years old, LeBeau served with the Army Nurse Corps' 76th General Hospital based in Minster, England. As Allied forces retook France and Belgium, she treated injured soldiers from medical tents, sometimes with bombs buzzing overhead.

"It was one of my greatest privileges and honor to have cared for those soldiers," LeBeau told the Rapid City Journal in 2004 when she was honored with the Chevalier de la Legion d'Honneur, France's highest civilian honor.

After the war, LeBeau kept treating patients on the Cheyenne River Indian Reservation and with Indian Health Services for over 30 years.

"In addition to keeping her people healthy, she protected their heritage by helping repatriate important cultural items belonging to the tribes," Gov. Kristi Noem said in a statement. "Through it all, it was her joyful spirit that connected her with many in her community."

As a member of the tribal council in the 1990s, LeBeau helped push an ordinance to ban smoking in tribal office buildings, even as she initially faced tribal council meetings that billowed with smoke from her fellow councilmembers.

Ryman LeBeau, who was inspired by his grandmother to become a tribal councilman, said she demonstrated how to stand her ground while keeping relationships intact.

"She never got mad at people, definitely disagreed with people but never in a disrespectful manner," he said.

In recent years, LeBeau also advocated for Congress to rescind the Medals of Honor awarded after the Wounded Knee Massacre on South Dakota's Pine Ridge Indian Reservation. When Democratic presidential candidates made their way through Iowa in 2019 for a debate centered around Native American issues, she asked each candidate whether they would support removing the medals and invoked the grief that still pervades Native American communities.

For Ryman LeBeau, it was yet another example of her compassion for others.

"She always supported justice for those that are treated unfairly," he said.