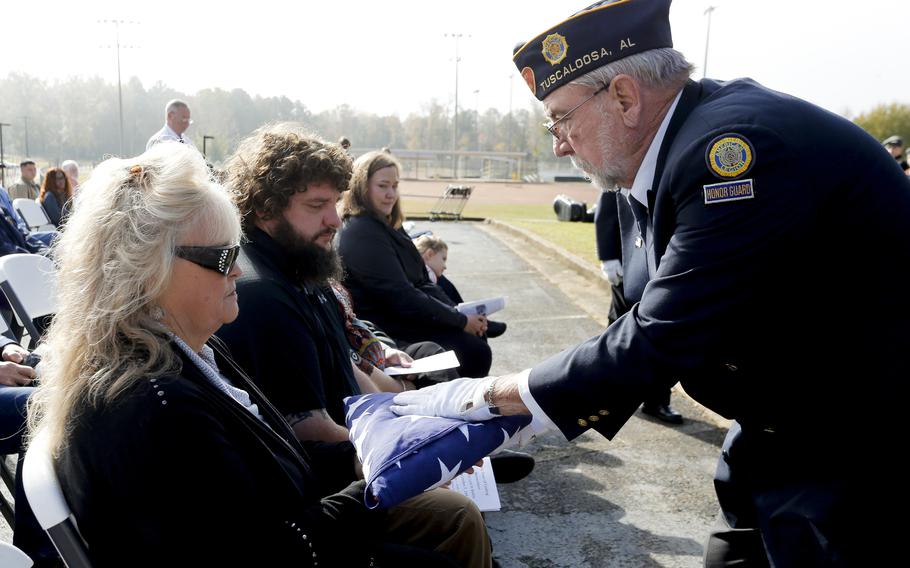 A monument to the memory of brothers Daniel P. Jones and Woodrow Wilson Jones, men who died aboard the USS Arizona Dec. 7, 1941, was dedicated in Coaling, a town in Tuscaloosa County, Ala., Friday, Nov. 12, 2021. (Gary Cosby Jr./The Tuscaloosa News via AP)

COALING, Ala. — The town of Coaling hosted a ceremony the morning of Nov. 12 to dedicate a monument honoring two native sons who died in the 1941 attack on Pearl Harbor.

Woodrow Jones, 22, and Daniel Jones, 19, of Coaling enlisted in the Navy in early 1941 and were assigned to the USS Arizona at the Pearl Harbor Navy Base in Oahu, Hawaii.

On Dec. 7, 1941, the Japanese launched a surprise aerial attack on Pearl Harbor, killing 2,403 U.S. service members and 68 civilians. More than half of those killed in the attack were aboard the USS Arizona, including Woodrow and Daniel Jones.

Jamie Jones, one of several relatives of the Jones brothers in attendance at the ceremony, thanked the town of Coaling for dedicating the monument to her great-uncles.

"This monument will stand strong for years and years to come, reminding us and our loved ones how blessed we are to have soldiers, so we can have the life that the Lord intended us to have," Jamie Jones said.

The USS Arizona was sunk during the Pearl Harbor attack and the Jones brothers' bodies were never recovered.

President Franklin D. Roosevelt declared Dec. 7, 1941, as "a date which will live in infamy" and the attack led to the U.S. entry into World War II.

The ceremony took place at Coaling's town hall a day after the nationwide celebration of Veterans Day. Nicolas Britto, a retired Army lieutenant colonel, hosted the ceremony with town officials, local veterans and descendants of the Jones brothers.

Coaling Mayor Gary Averett said the dedication ceremony was special to him and the entire town.

"Our town has a lot of veterans located in it. We're pretty much a family type community. And so things like this mean a lot to the people here," Averett said.

Averett, who is a retired master sergeant in the Army Reserve, said he has known the Jones family all of his life and they attend the same church in Coaling.

Although the Jones brothers died long before most of their surviving family were born, the family says they keep the memory of Woodrow and Daniel alive through sharing the story of their military service and what that service meant to the country.

Brookwood High School faculty and students also participated in the ceremony, with contributions from the school's Junior ROTC and a performance by the school's choir.