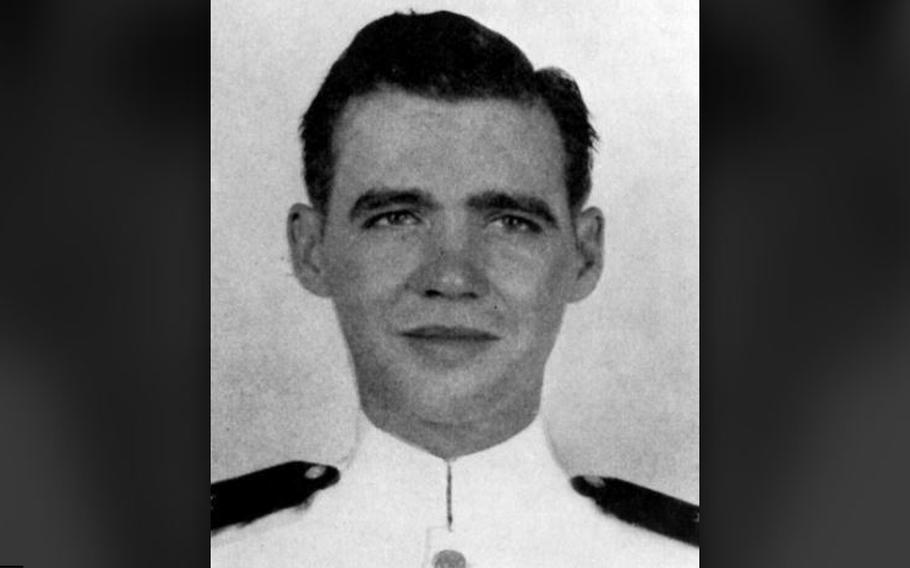 Francis Flaherty earned America’s highest honor for military valor in action on Dec. 7, 1941, while serving as a Navy ensign aboard the USS Oklahoma during the bombing of Pearl Harbor. (Defense POW/MIA Accounting Agency)

(Tribune News Service) — When Don Colizzi learned about Francis Flaherty, a Medal of Honor recipient from his town of Charlotte, Mich., he organized a fundraising drive in 2000 that raised $20,000 in six weeks to erect a memorial later that year outside the historic Eaton County Courthouse in Charlotte.

Flaherty earned America’s highest honor for military valor in action on Dec. 7, 1941, while serving as a Navy ensign aboard the USS Oklahoma during the bombing of Pearl Harbor.

On Saturday, Flaherty will be laid to rest between the graves of his parents at Charlotte’s Maple Hill Cemetery, nearly eight decades after his death. Colizzi will provide the eulogy.

“He was on the USS Oklahoma, and the ship got hit seven or eight times by torpedoes,” Colizzi said. “As it was flipping over, he held a flashlight and shined it on the corridor exit while he was knee-deep in water, and pushed a lot of guys toward the exit.”

Flaherty, who was 22 when he died, had only enlisted in July 1940. But his actions earned him several other medals, including the Purple Heart and the Combat Action Ribbon. The escort ship USS Flaherty (DE-135) was named in honor of him in 1943.

“He never made it out of the ship. He stayed there helping people, and that’s what earned him the Medal of Honor,” Colizzi said. “That made him a hero.”

Flaherty was initially buried at the National Memorial Cemetery of the Pacific in Hawaii, along with 400 other unidentified victims of the attack. But his body was finally identified with the aid of DNA technology in 2019. According to the Navy, remains are identified with help from DNA reference samples from family members as well as existing medical and dental records.

Flaherty’s heroism has become lore in his extended family, who made the decision to have him honored in his hometown of Charlotte.

“It was what we call a no-brainer to have Uncle Fran in his hometown,” said John Flaherty, Flaherty’s 79-year-old nephew.

Flaherty has had a cenotaph — a memorial that is sometimes in the form of an empty tomb — in the area since 1942, John said, as well as a memorial dedicated to him and the town’s other Medal of Honor recipient, Sgt. Michael Hudson. Hudson was a Marine who fought in the Civil War and helped protect the USS Brooklyn during the Battle of Mobile Bay in 1864. Originally from County Sligo in Ireland, Hudson died in Charlotte in 1891.

There have been more than 3,500 Medal of Honor recipients, John noted, calling the odds “pretty low” to have two in Charlotte, which had about 9,300 residents in the 2020 Census.

Francis was one of three brothers and a half-sister who all grew up in Charlotte. According to family stories, Francis was famous for once taking inspiration from Argentine gauchos and crafting his own bolas, a throwing tool that uses weights on the end of lengths of rope or other cords to catch animals.

He fashioned his own by tying rocks to the end of some wire. But instead of catching cattle, as a bola is commonly used for, Francis managed to ensnare two power lines.

“It shut down the power in all of Eaton County for a good day, according to the family legend,” his nephew John said.

When their parents died within a few months of each other in 1932, the children were raised by their grandmother and an aunt.

“They also, in no small part, raised themselves,” John said. “It was a tough time, just coming out of the Depression, and they made it. They’re all heroes in my mind.”

Flaherty’s burial will take place at 11 a.m. at Maple Hill Cemetery, 801 Tully Brown Drive. It will follow a procession through town that will start at 10:30 am at Pray Funeral Home, 401 W. Seminary. Maple Hill Cemetery is also where Hudson is buried, according to cemetery records.

The city of Charlotte has been “exceptional” at making his family feel welcome as they bring Francis home, John said. The “outpouring of gratitude and good human nature” has made a huge difference as family members travel to Charlotte, he said.

John is coming from New Mexico. While in Michigan, he plans to meet with distant family members from around the state, all reunited over Francis’s return home.

Without the help of others, he said, it wouldn’t be quite the same to bring Francis back to Michigan. John said he was glad Charlotte recognized his “Uncle Fran” as a hero.

“We’re short on heroes today, so we’ve got to do everything we can to honor one when one comes along,” said Colizzi, the eulogizer.