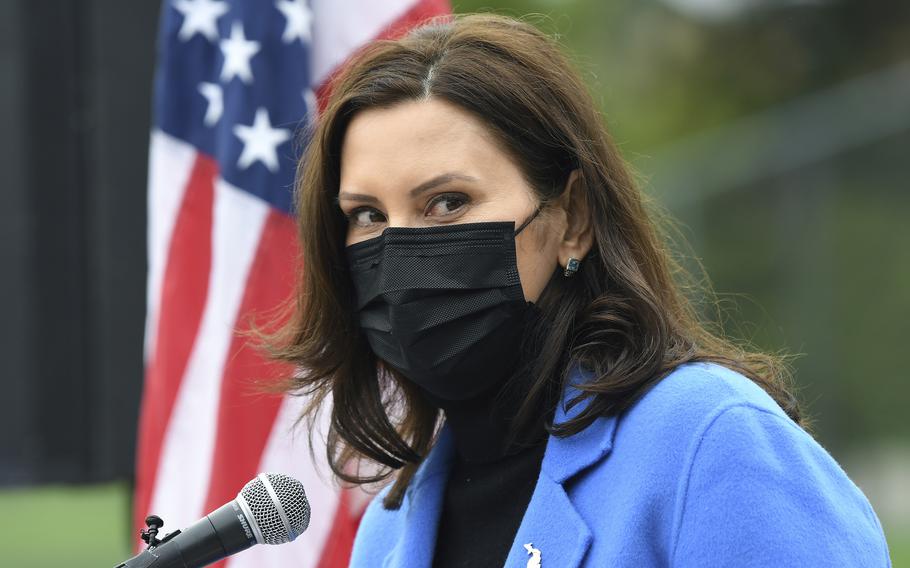 Michigan Gov. Gretchen Whitmer attends an event in Ypsilanti, Mich., on April 12, 2021. Whitmer signed legislation on Wednesday that makes it easier for veterans and their families who are licensed professionals to continue their careers when they move to the state. (Lon Horwedel/AP)

LANSING, Mich. — Michigan Gov. Gretchen Whitmer signed legislation on Wednesday that makes it easier for veterans and their families who are licensed professionals to continue their careers when they move to the state.

Veterans, active-duty service members and their dependents with valid out-of-state professional licenses can get their licenses in Michigan under the new laws and the fees for application will be waived.

Current law allows veterans to have the initial application fees for professional licenses to be waived, but the new laws expands that waiver to active-duty service members and their dependents.

The families of the 550,000 veterans in Michigan face enough struggles seeking employment after service without having to figure out how to get re-licensed when they have a valid out-of-state license, Zeneta Adams, director of the Michigan Veterans Affairs Agency, said Wednesday at a bill signing in Lansing.

Whitmer said that the bills will help welcome service members and their families to Michigan and promote a skilled workforce, helping the state achieve its goal of raising the number of people with a professional certificate or college degree to 60% by 2030, up from the current 49%.

The legislation received bipartisan support in the legislature.

Military service is not just a sacrifice made by service members but by the families that move throughout their careers, said Gen. Paul Rogers, director of Military and Veterans Affairs.

"I just want to thank them personally, on behalf of the 11,000 National Guard members in Michigan, the thousands of reserves across the other services that call Michigan home and then the hundreds of active-duty members that come to Michigan on an annual basis to work and live," Rogers said of Michigan's leadership.

Anna Liz Nichols is a corps member for the Associated Press/Report for America Statehouse News Initiative. Report for America is a nonprofit national service program that places journalists in local newsrooms to report on undercovered issues.