14 years after he was wounded in a blast, Iraq veteran gets a Purple Heart for his TBI 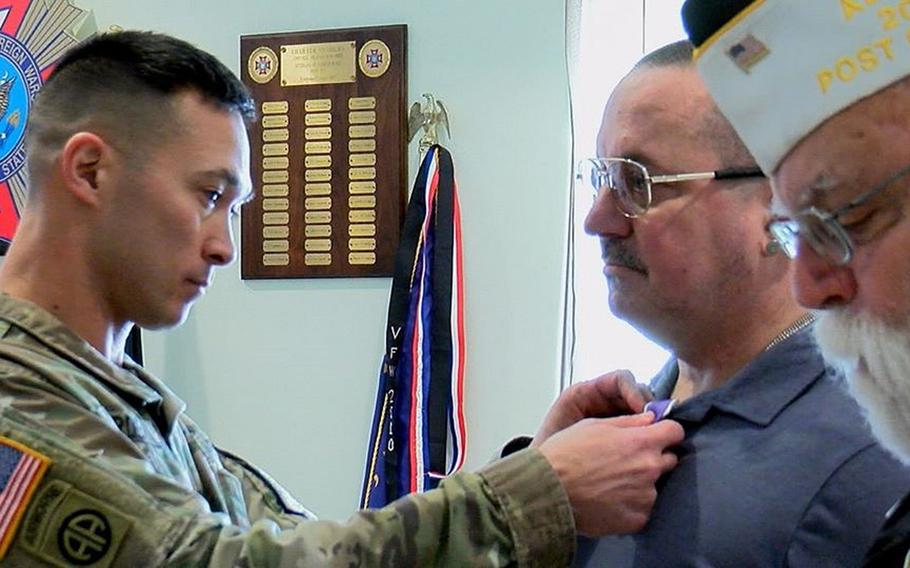 Command Sgt. Maj. Michael Carden of Carlisle Barracks in Pennsylvania pins a Purple Heart onto the lapel of David Ott, a retired National Guard combat medic who was wounded in Iraq in January 2006, as Rick Olson, VFW Post 477 commander, reads the award citation during a luncheon on Wednesday, Jan. 29, 2019. (Rick Olson)

Command Sgt. Maj. Michael Carden of Carlisle Barracks in Pennsylvania pins a Purple Heart onto the lapel of David Ott, a retired National Guard combat medic who was wounded in Iraq in January 2006, as Rick Olson, VFW Post 477 commander, reads the award citation during a luncheon on Wednesday, Jan. 29, 2019. (Rick Olson) David Ott, left, a retired Pennsylvania National Guard combat medic, poses for a photo on Wednesday, Jan. 29, 2020, with longtime friend Keith Holdren, who he served with in the Guard. The two are pictured at VFW Post 477 in Carlisle, Pa. shortly after Ott was awarded a Purple Heart for a traumatic brain injury he received in 2006 in Iraq. (Rick Olson) 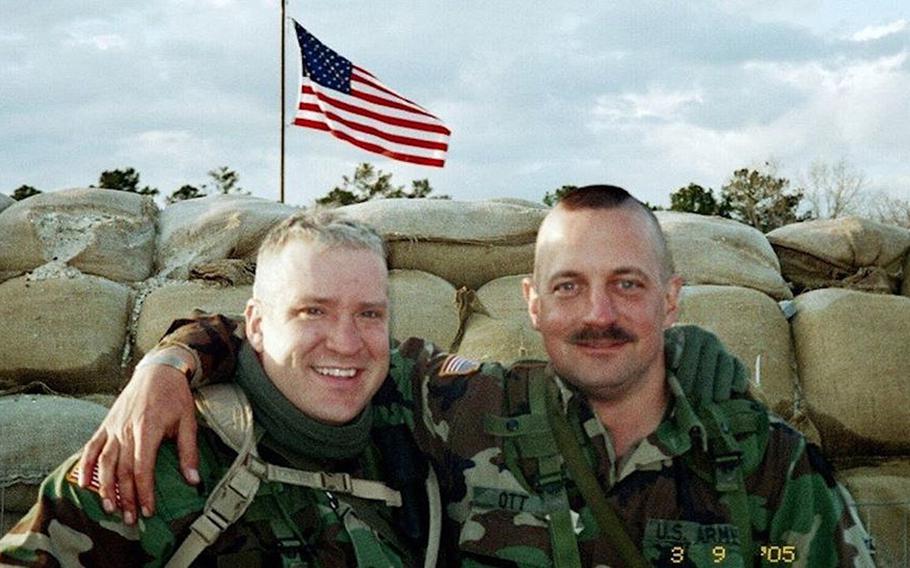 David Ott, right, is pictured as a staff sergeant in this photo dated March 9, 2005, with physician's assistant Capt. Ryan Quinn. Ott was awarded a Purple Heart medal in January 2020, 14 years after suffering a traumatic brain injury in Iraq. (Rick Olson)

Combat medic David Ott’s injury caused by a roadside explosion in Iraq in 2006 seemed minor, until months afterward he fell into a coma, his brain bleeding and swollen from the traumatic brain injury he’d suffered.

Fourteen years later, the Iraq war veteran had a Purple Heart pinned to his chest for TBI so severe it left him with memory issues and in need of a service animal.

“I’m happy, and it finally brings closure to something that’s a long time coming,” Ott told local news outlets. “And kind of sad, too, because this is the last time that I’ll be getting an award from the military.”

Ott was finally presented the medal — considered the military’s oldest still in use — at a ceremony last week during the “Old Warriors” luncheon at VFW Post 477 in Carlisle, Pa., where he now lives.

Carlisle Barracks Command Sgt. Maj. Michael J. Carden presented the medal as TBI was again in the headlines out of Iraq, after at least 64 U.S. troops were diagnosed with brain injuries from an Iranian ballistic missile strike on al Asad Air Base last month. Critics said President Donald Trump minimized the wounds’ seriousness when he told reporters they weren’t as bad as other traumatic blast injuries he’d seen, such as limb amputations.

Considered one of the signature wounds of recent wars, TBI has long qualified for the Purple Heart. But in 2011 the Defense Department clarified the award criteria for cases where invisible wounds received during hostilities don’t cause loss of consciousness and may not show immediate symptoms requiring treatment. Though Ott was treated, initial attempts to get him the award were denied.

Initially, Ott only felt dizzy and nauseated, he told Stars and Stripes. Though he suffered night terrors and headaches, he remained in Iraq and finished his tour.

Two months after returning home, he was on a trip to Disney World with his family in August 2006 when he went “stiff as a board” and dropped to the ground. He was medically evacuated to an Orlando hospital and spent nearly six weeks in a coma.

The retired soldier, who also served as an Allentown police officer, has suffered memory difficulties and still takes anti-seizure medication. For balance, he needs the help of his service dog, a black Labrador retriever named Sarge.

He had initially been put in for the Purple Heart by his unit, but it was denied and the unit didn’t pursue it further, Ott said. His childhood friend Keith Holdren, a retired major who served in the same Pennsylvania National Guard unit, picked up the ball and submitted the paperwork seeking the Purple Heart for him four times.

The medal finally showed up unceremoniously in the mail last summer, but that didn’t sit well with Ott’s wife, who emailed Rick Olson, the VFW post commander in Carlisle, to tell him it came with “no paperwork, just a medal, nothing describing why it was awarded” or why it had taken so long, Olson said.

“You don’t need accolades, but sometimes it’s nice to have the feeling that somebody else knows you did good,” Jeanine Ott told the local Fox affiliate.

Olson involved Carlisle Barracks and got Rep. Scott Perry’s office to help obtain a citation for the award. He then scheduled it to be presented during a lunch the post hosts every two months for World War II and Korean War veterans from six local retirement homes, he said. Local JROTC cadets were also among about 50 people in attendance.

During the event, Holdren made sure Ott also received a saber inscribed with his name and rank, an honor the former staff sergeant did not receive when he retired in early 2007 after more than 23 years of active duty and National Guard service.

“Not only does this sword help him move forward, but the Purple Heart finishes that journey,” Jeanine Ott said.