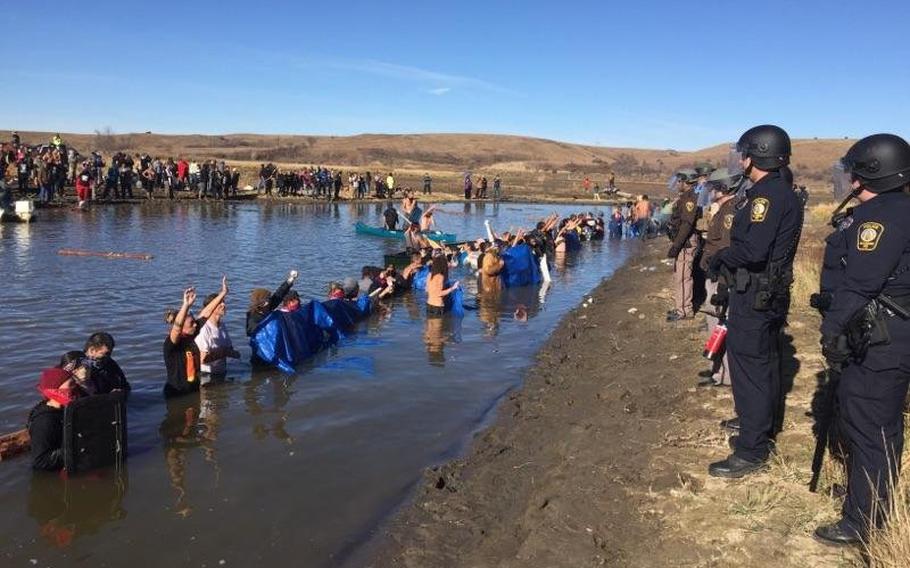 Police use pepper spray and tear gas to push demonstrators back as they try to cross a creek on Wednesday, Nov. 2, 2016, to prevent construction of the Dakota Access Pipeline. (Morton County Sheriff's Office)

WASHINGTON — Hundreds of veterans will arrive at Standing Rock Indian Reservation this weekend to join the monthslong protest of the Dakota Access Pipeline, bringing with them an influx of resources and attention.

The movement, called “Veterans Stand for Standing Rock,” will last from Dec. 4 through Dec. 7. The veterans are going with the goal of “protecting the protesters,” said Anthony Diggs, a Marine Corps veteran who is acting as a spokesman for the group.

As of Monday afternoon, the group had raised more than $495,000 that Diggs said will go toward establishing services at the protest camps, such as medical and supply tents, secure lines of communication and heating systems to help protestors through the winter.

Diggs confirmed hundreds of veterans from across the United States were registered to participate, and the number could reach up to 2,000 – a cap set by organizers.

Veterans are a good fit for the job, Diggs said, because they’re organized and know how to handle emergency situations and extreme weather.

There’s also a “symbolic value” in veterans taking a stand, he added.

“There is a lot of power in veterans from all over, from all branches of the military, coming together to create a protecting front against the police, who are militarized themselves,” Diggs said.

Organizers warned veterans participating that they could be confronted with multiple state police agencies, some of them in riot gear and equipped with rubber bullets, pepper spray, water cannons and tear gas. Veterans have been instructed not to bring weapons and not to fight or destroy private property.

Opponents of the Dakota Access Pipeline started protesting this summer, claiming the $3.8 billion oil pipeline could harm drinking water if ruptured and would encroach on sacred sites of the Standing Rock Sioux.

Protesters and law enforcement have clashed during the past several months. Last week, police used a water cannon in freezing temperatures as crowd control, according to news reports.

One woman protesting the pipeline could lose her arm after being wounded during a confrontation with law enforcement. There are conflicting news reports of whether her injuries were caused by officers or fellow protesters, with each side arguing it was the other.

Hundreds of protesters have been arrested at the site.

“Basically, we’re prepared for whatever it is we’re going to have to deal with when we arrive,” Diggs said.

The veterans’ trip falls on the Dec. 5 deadline that the U.S. Army Corps of Engineers announced Friday in a letter ordering people to leave federal land being used for protest. The announcement stated protestors must relocate for safety reasons to a free speech zone south of the Cannonball River.

In a news conference Saturday, the Standing Rock Sioux Tribe said it would stand its ground.

Dave Archambault II, chairman of the tribe, wrote in a statement that the Corps of Engineers’ announcement was “saddening” but “not at all surprising.”

“It is both unfortunate and ironic that this announcement comes the day after this country celebrates Thanksgiving – a historic exchange of goodwill between Native Americans and the first immigrants from Europe,” his statement reads.

The Corps of Engineers clarified Sunday it wouldn’t forcibly remove the protesters.

“There’s a lot of rumors going around the camps. As those things are announced, it’s caused a little bit of panic and paranoia among the people because they don’t know what to expect,” he said. “As far as our end goes, nothing has changed our plans. We’re still going out there with the numbers, the donations and supplies.”

In a video of the Saturday news conference, protesters are shown cheering when one of the lead organizers said the veterans were still planning to show up.

”They are ecstatic,” Diggs said. “Because the support we’re bringing is to sustain their operations out there in the freezing weather, and to create infrastructure and organization so when they need medical help, food and warmth, they have access to it.”

Veterans Stand for Standing Rock was started by Army veteran Wes Clark, Jr. and Marine Corps veteran Michael Wood, Jr., both of whom have been outspoken against the pipeline.

Besides slowing construction of the pipeline, the group’s goal is to kick up widespread support for the protesters, according to organizers.

Elected officials will be present at a news conference at the start of their trip, Diggs said. Organizers are also asking participants to use their phones and other devices to share what they’re doing on social media.