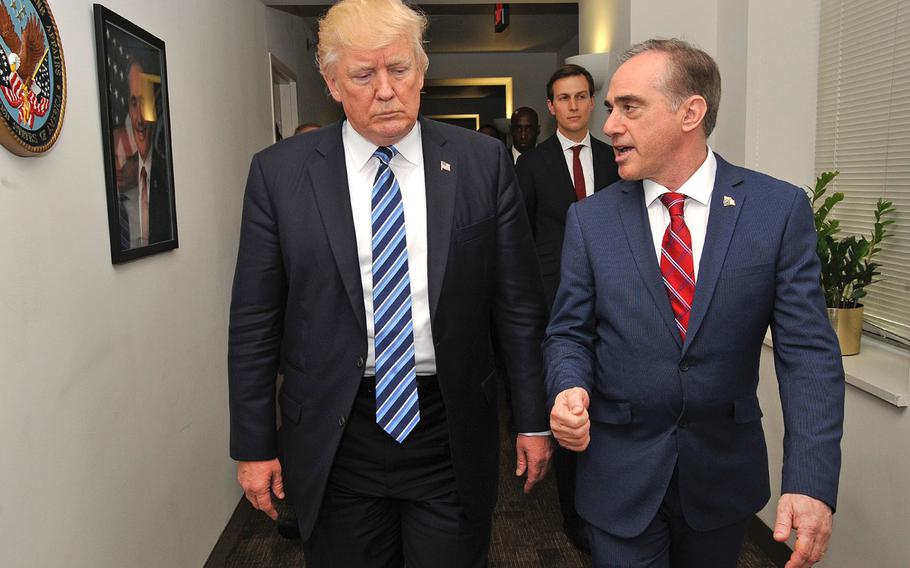 President Donald Trump and Secretary of Veterans Affairs David Shulkin walk through a hallway at the VA's Central Office on Thursday, April 27, 2017. Shulkin said Wednesday that he has a team investigating a Washington, D.C. VA hospital that was named in an Inspector General report. (Robert Turtil/VA)

President Donald Trump and Secretary of Veterans Affairs David Shulkin walk through a hallway at the VA's Central Office on Thursday, April 27, 2017. Shulkin said Wednesday that he has a team investigating a Washington, D.C. VA hospital that was named in an Inspector General report. (Robert Turtil/VA) 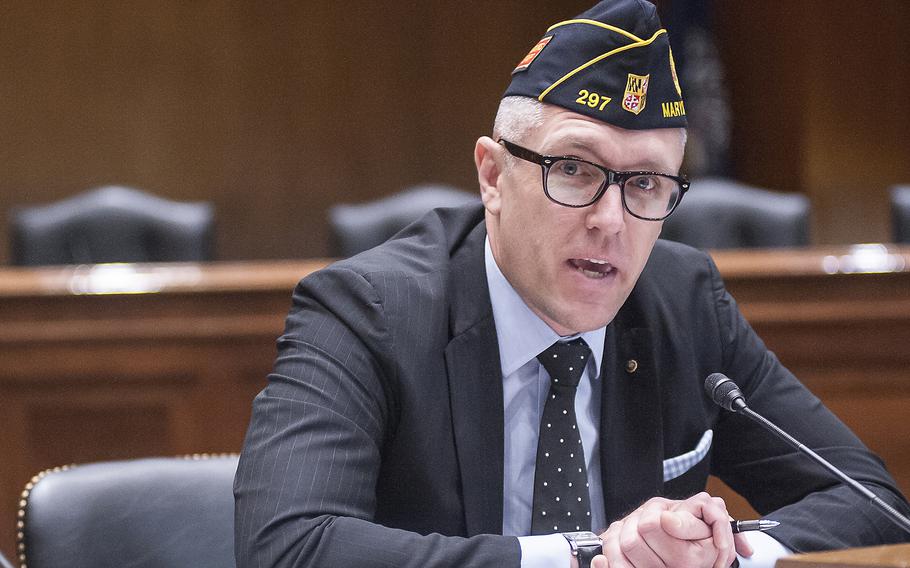 Retired Marine Corps Lt. Col. Joe Plenzler speaks during a panel discussion inside the Senate's Dirksen Building on Capitol Hill on April 5, 2017. Plenzler, director of media relations for the American Legion, said the group became “very concerned” after an inspector general report on April 12 that found the VA's flagship hospital was running out of various medical equipment and failing to sterilize storage areas. (Carlos Bongioanni/Stars and Stripes)

WASHINGTON — The American Legion is attempting to expose veterans’ issues at the Department of Veterans Affairs’ flagship hospital in Washington, D.C., following a watchdog report earlier this month that found the facility could have endangered the well-being of patients.

The American Legion, which represents more than 2 million veterans nationwide, will host a town hall-style meeting Wednesday. Washington’s congressional delegation and VA staff will be there, and the veterans group is asking any veteran who uses VA health care facilities in the city to show up and share their experiences.

Joe Plenzler, director of media relations for the American Legion, said the group became “very concerned” after the VA inspector general released findings April 12 that the hospital was running out of various medical equipment and failing to sterilize storage areas.

“We remain concerned about ongoing issues,” Plenzler said. “Why we’re having this is so veterans’ voices are heard, and to learn their opinions on the quality of care at the DC medical center.”

In an unusual move, Inspector General Michael Missal released findings about the hospital before his office finished its investigation. The report stated 18 of 25 sterile storage areas for medical supplies were dirty, and more than $150 million in equipment was unaccounted for because the facility did not have an adequate inventory system.

A lack of medical supplies caused delays in patient surgeries in multiple instances, the report stated.

Missal wrote he had a “lack of confidence” in VA leadership to quickly fix the root cause of the issues.

Shulkin told reporters two weeks later, on April 26, that Connell has been at the hospital “day and night.” He also said he sent a team to establish a new electronic inventory system at the facility that was put in place within 48 hours of the report’s release.

In the report, the inspector general’s office said it hadn’t yet determined whether any veterans had been harmed because of the issues at the facility. The office is continuing its investigation.

Shulkin said he also has a team investigating.

“Patient safety is not at all compromised,” he said April 26. “There has not been any patient harm that we are aware of, from this. And we are continuing our investigation as to the actions that will result from the management perspective.”

Plenzler said the American Legion is anticipating some of Shulkin’s staff will attend the town hall Wednesday.

“Our goal is to bring veterans together with them and elected officials,” he said. “Veterans can stand up and speak, and everyone else gets to close their mouth and listen.”

The group has held other town hall meetings in areas where veterans have faced challenges with their local VA hospitals, including one recently in Phoenix – the epicenter of the VA wait-time scandal in 2014.

The meeting will start at 7 p.m. in the auditorium of the Washington, D.C. VA Medical Center, 50 Irving St. NW.